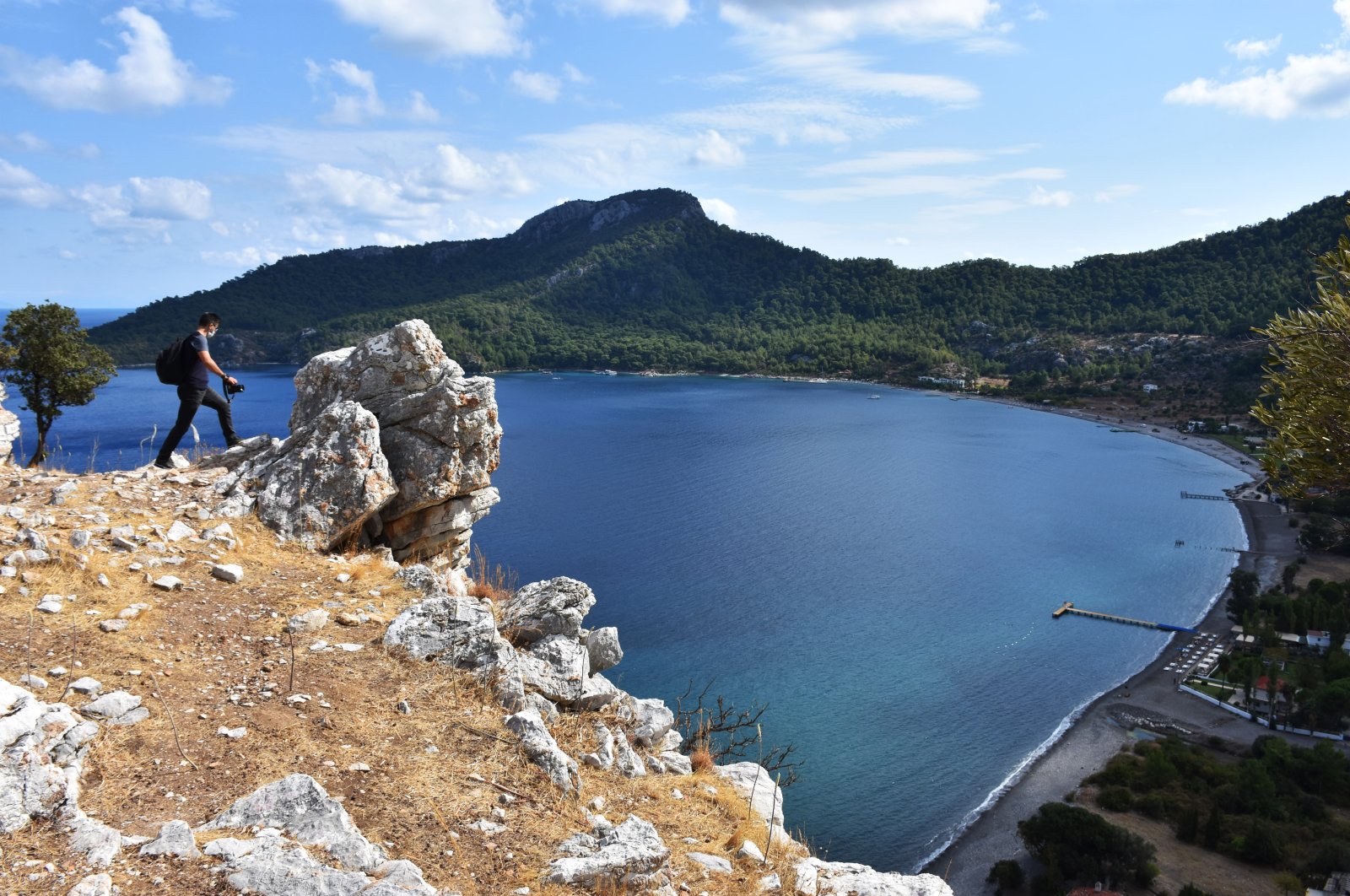 The ancient city of Amos is located at a dominant point that overlooks the surrounding bays, Muğla, southwestern Turkey, Oct. 13, 2020. (AA Photo)
by Anadolu Agency Oct 15, 2020 10:57 am
RECOMMENDED

A rescue excavation will be carried out following the discovery of a burial chamber during an illegal dig at the ancient city of Amos in Marmaris, southwestern Muğla.

Archaeological work in the ancient city of Amos will continue this year in a cooperative project between the Department of Archaeology of Muğla Sıtkı Koçman University (MSKU) and the Marmaris Chamber of Commerce (MTO). The surface research project will salvage the excavations in order to recover the tomb chamber as well as repair the ancient city's walking track.

A surface survey study began last year and has so far revealed the ancient city was spread over a larger area and seems to be a bigger settlement than previously thought. The excavation of the tomb is set to begin in the upcoming days.

Speaking to Anadolu Agency (AA) about the developments in Amos, Marmaris District Mayor Mehmet Oktay described tourism and history as inseparable, adding: “We will support efforts so that Amos, with its history spanning 2,000 years, will come to life again. Amos is an important point for tourism.” MTO President Mutlu Ayhan also stated that the ancient city has significant sustainable tourism potential.

Mehmet Gürbüzer, the consultant on the rescue project and an academic at the Archaeology Department of MSKU, stated that during their research last year, they uncovered a new historical structure in the ancient city.

Gürbüzer recognized the tomb chamber was partially destroyed, continuing, “as a result of our efforts, the burial area was partially protected. A rescue project was prepared. As part of the project, we plan to start excavating the tomb. There may be other surprises in this excavation and we could potentially find more tombs.”

The ancient city of Amos means "Temple of the Mother Goddess" in the Hellenic language. Built on a hill, the city is surrounded by walls supported by 1.8-meter (5.9-foot) -wide and 3.5-meter-high towers. The city was a continuous settlement from the Hellenistic period to the Eastern Roman era with its theater being the most notable structure.

Amos was established at a focal point that overlooks the surrounding bays, with terraces offering panoramic views of sunsets.