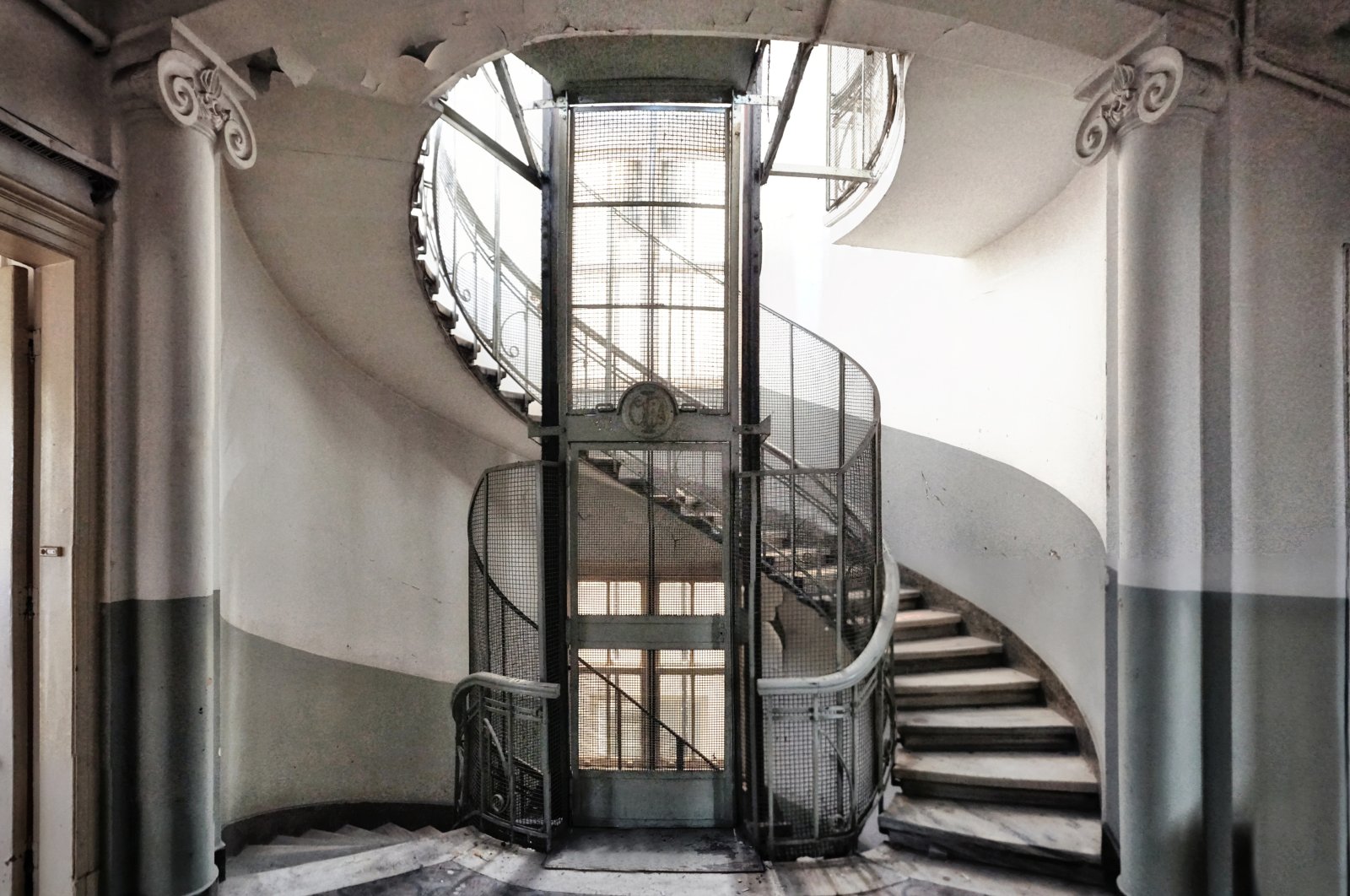 The decoration and ornaments on the main staircase in the building will be preserved.
by DAILY SABAH Jun 08, 2020 1:10 pm
Edited By Irem Yaşar
RECOMMENDED

The long-running project work and permission process for the restoration of the historical building of Iş Bank in Istanbul’s Beyoğlu district, which has been designated as a museum to host the painting collection of the bank, has been completed. The construction work to renovate the historic building as a museum will begin in the coming days. With the new museum to be implemented under the umbrella of Iş Sanat, which operates in many fields from music to plastic arts, from museology to the support of archaeological studies, an important stop will be added to Beyoğlu's art route.

Iş Sanat General Manager Zuhal Üreten stated that they are pleased that the historical building, located right next to Odakule on Istiklal Avenue, which served as the Beyoğlu branch of Iş Bank between 1953 and 2016, will be restored and converted into a painting museum. Indicating that they have received permits for the restoration project of the historic building, which is one of the precious elements of Beyoğlu's cultural identity, after a long process, Üreten said: “Although the project process may seem difficult, we are working with the awareness that such architectural structures have an important place in preserving the city's memory and transferring it to the future. We are experienced in evaluating historic buildings as museums. We are excited to have taken a big step in the preparatory work of our third museum after Türkiye Iş Bank Museum opened in the historical building of our Yenicami branch in Istanbul’s Eminönü district in 2007 and the Economic Independence Museum that came into service in our historic headquarters in Ulus district in the capital Ankara last year. The building, which will serve as a painting museum, will display Iş Bank’s collection of artworks created since the 1940s.”

The first paintings of Türkiye Iş Bank were Hikmet Onat’s “Peyzaj Ortaköy” (Landscape Ortaköy), which was selected from the Second State Painting and Sculpture Exhibition, Şevket Dağ’s “Rüstem Paşa Camii” (Rüstem Pasha Mosque) and Vecih Bereketoğlu’s “Kayık ve Evler” (The Boat and Houses). The bank’s collection reached 23 paintings by the end of the 1940s and gained speed after the 1950s. It consists of paintings by a number of master painters, including Osman Hamdi Bey, Şeker Ahmet Paşa, Hoca Ali Rıza and Ibrahim Çallı. Currently, it is one of the largest painting collections in Turkey with over 2,000 artifacts by over 800 artists.

The building was built in the early 1900s with the ground floor for commercial purposes and the other floors as residences and consists of five regular floors and one terrace, as well as basement and ground floors. This building, which has been registered as a cultural asset required to be preserved, is considered to be one of the examples of 20th-century apartments in Beyoğlu that stand out in terms of both location and architecture.

Project owner Ertuğ Uçar said the project process is exciting, adding: “The building is an impressive and imposing Beyoğlu apartment building. And the collection is the first of the works of the most important representatives of Turkish art in the Republican period. The new museum on Istiklal Avenue will be a building fully equipped with cultural and artistic functions with its bookstore, art library, multipurpose hall, workshops and exhibition floors, which will be spread to the ground floor and opened to Odakule square. Apart from being its architect, I am also excited as a spectator of culture and arts. With a design approach that questions the habits of the discipline of conservation, we aim to respond to the needs of today's contemporary museum while keeping alive the original atmosphere of this typical Beyoğlu apartment building, which dates back to the early 20th century.”

“In this direction, we protect the room sequence just behind the facade line, the main staircase of the building and the historical elevator with all their decoration, ornament and materials in their places. As for the larger exhibition halls, service elevators, fire escape and technical shafts that the museum needs, we are rebuilding a thin long slice in the center of the building as a caisson structure from the basement to the roof. This reinforced concrete core in the center of the building will also serve as a fortification element that ensures the survival of the fruit of the building, that is, the large and precious part we protect. The construction process that I have mentioned briefly above seems to be difficult. As the project owner, we will be involved in this process, and we will make our best contribution to the completion of Iş Bank Beyoğlu Painting Museum in the best way and to become a part of Istanbul and Istiklal Avenue's cultural and artistic life,” he added.