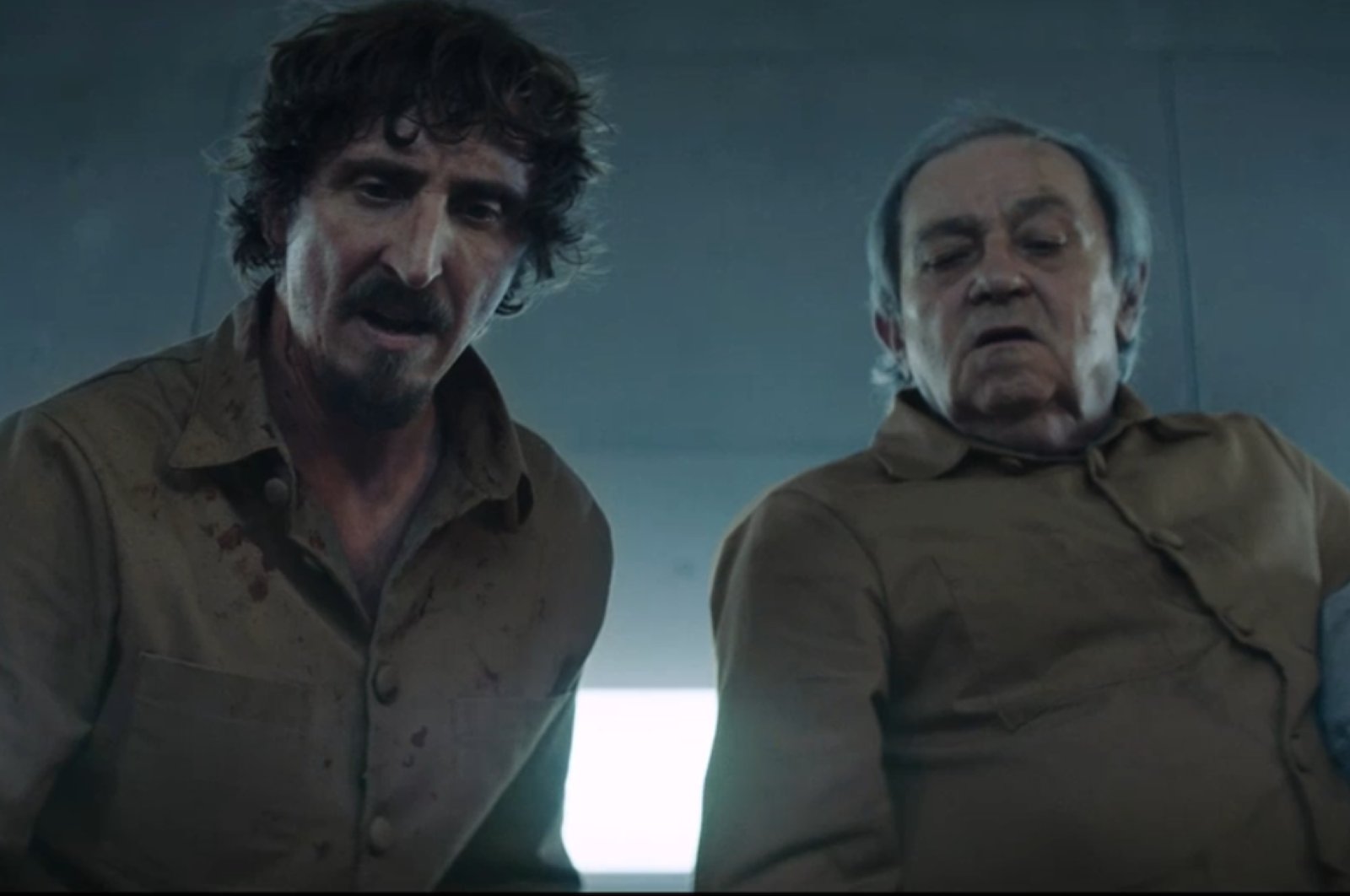 Ivan Massague (L) as Goreng and Zorion Eguileor as Trimagasi in “The Platform”.
by ALİ TÜFEKÇİ Apr 14, 2020 3:20 pm
Edited By Irem Yaşar

The Spanish movie “The Platform,” which can be interpreted as a twisted allegory about greed, makes viewers question the recent period in which stockpiling and buying in bulk have become an issue due to the coronavirus pandemic

The coronavirus outbreak has confıned us to our homes. When the initial anti-virus measures were announced, most of us headed out to buy and stock whatever we could. In the following days, one mother's video went viral, showing her crying in front of empty shelves. “I cannot find diapers now because I do not have the opportunity to buy in bulk like you," she said.

When the weekend curfew was announced in Turkey on Friday night, the intent of the ban was immediately violated. People formed long queues in front of markets and bakeries, ignoring what authorities had been reiterating for weeks. The situation reached a level at which people bought whatever they could lay their hands on without thinking about anyone else. The same situation could be seen all over the world.

Fear of hunger is one of the greatest handicaps for human beings. Our ego instantly takes over, and we do not think of anyone but ourselves. We put all logic aside and surrender to our primitive self.

Netflix Spain streamed "The Platform" (El Hoyo) as if they had foreseen these images. The film, directed by Galder Gaztelu-Urrutia, presents a story that applies to the present day and makes us question our surrender to our primal instincts.

The production depicts a unique kind of prison that has never been seen before. Each prison cell is made of concrete with a rectangular hole in the center, through which its inhabitants can see above and below across many stories. In this vertical building, there is a perfect kitchen on the top floor, and the prepared food is placed on a platform, which gives the movie its name. The platform full of food enough for all prisoners is first lowered to the first level, where it stays for two minutes. Whatever is left is lowered to the second level, and so on. Once it passes through all the floors, it quickly returns to the top floor. The same distribution occurs every day.

'They are down there'

All the questions that hero Goreng, played by Ivan Massague, asks to understand the prison system are actually questions that come to our minds as well while watching the film. When you go to jail, you are only allowed to take one thing from outside. Goreng takes a book with him, “Don Quixote.”

The inmates on the first floor are lucky, as the quantity of food reduces as the platform descends to the lower floors. No one cares about those who are on lower levels. Everyone eats as fast as they can in 2 minutes, often taking more then they need. After a certain floor, there is no food left.

The hero is astonished at this situation. When he asks his fellow prisoner Trimagasi, played by Zorion Eguileor, “Why do they not eat enough?” he gets a simple answer: "Because they are down there, and we are up here." "The Platform" shows what imprisoned human beings turn into when the fear of hunger takes over. This is very similar to the situation facing us today amid the coronavirus outbreak. People continue to hoard food, without showing any concern for those who may not have the opportunity to buy and stock.

Everything in the film is symbolic from beginning to end. Prison represents the world we live in, the platform is time, meals served on the platform are our sources of production and consumption, and the floors are generations or social classes.

Not only these but also the characters are a reflection of human nature. Characters representing id, ego and superego can also be interpreted as Satan, Christ and a saint.

Goreng intends to wage war on the brutality he sees in the coming minutes and change this unjust and cruel order, just like Don Quixote does. There is actually a plot in the film where we can match the characters to those in Don Quixote.

Throughout the film, we see dialogues based on religious references as well as philosophical and sociological determinations. It makes us question life, the world and our way of life from a wide variety of perspectives.

To put it simply, in the atmosphere of shared panic and fear of hunger being experienced by mankind due to the coronavirus outbreak, homes have transformed into prisons similar to those in the movie.

"The Platform" is an ideal film to gain a better understanding of ourselves, the world we live in and to reflect on our own behavior during the quarantine.

Twisted end of a twisted film

The end of the film is as curious as its story. Not many people understand what happens in the end and are urged to think that the story goes up in the air. The director states in an interview for Collider that he conveys a symbolist message here. In response to the question “What do you envision happening after the events of the film? Will the message be received?” Galder Gaztelu-Urrutia says: “That’s something that you should ask society. It’s up to all of us. It depends on whether we want to remain the most miserable species that have ever set foot on this planet or if we want to...”

The movie will leave us questioning our own mindset during the current lockdown. What are we leaving for future generations? Are we going to behave similarly to those on the upper levels and hoard without the slightest remorse for those on the lower rungs of the social ladder?