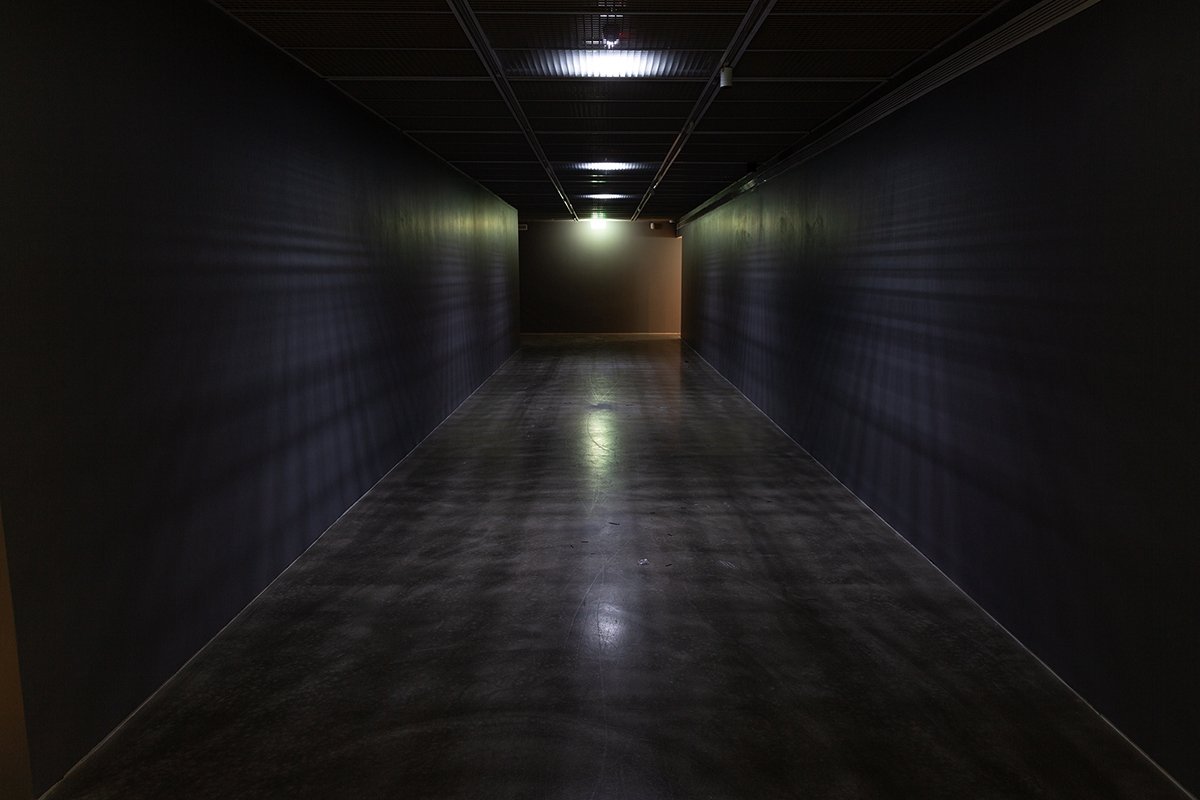 Deniz Gül's "Passage" appears as disconcerting with its dim light and enigmatic structure. (Courtesy of YKY)
by Matt Hanson
Nov 02, 2020 10:23 am

​​​​​​​At Yapı Kredi Arts and Culture, a renovated exhibition center along Istiklal Street, in the heart of Istanbul’s historic core, a contemporary art installation by Deniz Gül enlightens its context with a cerebral jolt

The idea of space implies a kind of freedom, even one so theoretical as that proposed by the abstract tendencies of modernist art. The curious significance of such works as "Meydan" ("Square") by Deniz Gül at Yapı Kredi Arts and Culture (YKY), however, serves not only as a source of self-reflection, but as an incisive visual and spatial demonstration, interpretive commentary on the greater environment and the intersectional urban and social infrastructure in which these pieces of pieces are set and seen, or perhaps, not seen, considering their highly elusive and ultimately, visionary manifestation.

Where there is emptiness, there is not only its opposite form but potentiality. It is no secret that economic modernism, with its technological speed and material industry, has suffused human life with unprecedented, and increasingly intensive mental saturations, psychologically overwhelming the mass of sociological and demographic determinants with floods of consumable goods, of tradable commodities, whether palpable or not, capitalizing on the nature of individual choice to abandon.

As one of the countless examples, the oblique city square that has formed between Galatasaray High School and the YKY Arts and Culture complex is just one node along the commercial promenade of Istiklal Street, where salespeople and passersby compete for the briefest attention span over the exchange of sunglasses, ice cream, umbrellas, baklava, books, education and further demands on the time of the global leisure class, such as to peruse the history of Karagöz shadow theater, or to admire the paintings of a poet.

Sandwiched in between what would otherwise be normative, mainstream modes of cultural appreciation for most people, however, is an entirely thought-provoking and utterly minimalistic, fantastically integrated installation of material-light concepts. "Meydan," Turkish for a village or city square, offers a welcome, even tranquil divergence from the overburdening, runaway urbanization that lies just outside the institutional framework in which Gül's work might be observed, walked through and merged with daily thought, refreshing the browser of the mind.

Although there is a certain, scintillant sharpness to its design, "Meydan" sparks with personality, as presented with an informal, process-based front. The exhibition is curated by the prolific Kevser Güler, also responsible for poet Lale Müldür's painting series, "Milat" ("Milestone"), one floor upstairs from "Meydan" at YKY, and Arter's current group show, "Celestial Bodies." As an artist and writer, Gül's handwritten scrawl is the face of "Meydan," emphasizing its experimental tone, exploring the essence of nonfigurative expression.,

That which is not perceived

To reinforce status-quo thinking, what might be called normalcy, intellectual transactions of everyday, conventional speech are revealed as arbitrary and rote. Even turns of phrase that might seem to make total sense, when rethought and decontextualized, take on an unusual, impersonal, sometimes inhuman character, rationalized purely based on patterns of repetition. "Good morning," or "how are you?" when questioned theoretically are nothing more than symbolic gestures, positing sameness in the face of reality's constant change.

In the same way, the structural norms of a city are fickle, as defined by its population of human communities, and by a more enlightened ecological holism rather than by the mechanical displays of its architectural distinctiveness or the top-down narratives of its popular history. A square, or any variety of open space, is anathema to the politics of modernized, urban finance in which real estate investment rules above all. Like a dazzling, superhero blockbuster, a city's emptiness is generally filled to the brim with towers and malls.

With "Meydan," Gül has quite cleverly exemplified an alternative, both to how space is conceived and recognized in a city, and how the forms of its normality might be reinterpreted when slightly divergent. For one, she has perfected the art of seamless installation with that of the institutional curation. Akin to that which artist Ayşe Erkmen prompted with her piece "9'04''" at the 2019 show "Whitish," one of the inaugural exhibitions at the new Arter museum in which one of the interior walls of the museum moves, almost imperceptibly.

The piece, "Passage" (2020), for example, provided little reason to house security at YKY, as one uninformed worker simply did not imagine that emergency led lighting, illuminating the corridor around the main gallery space might be considered art, or any order of cultural expression outside of its mere utility. The grey-hued, eerie setting that it conveys instills a parallel to that which ensues outside in the intersection on Istiklal Street, where the openness cultivates visibility, however, just nearby, the alleys of Taksim are dark as a mystery.

The playful attitude was executed by an earlier show at YKY, by the elder trickster artist, Halil Altındere, whose hyperreal wax figures in the 2019 show "Abrakadabra" were modeled after security guards tasked with watching over inanimate versions of themselves. When art assumes and infiltrates the serious, workaday pose of the overarching business sector that would look down on its intellectual remove as decorative or entirely irrelevant, the result of portraying the conversation of mutual disdain can make for effective satire. "Meydan," however, is not as didactic or representational and, instead, frees interpretation from all objectification.

After all is said and said again

In technical terms, there are seven pieces at "Meydan." They could be described as mostly having derived from industrial installation objects, but also include performances in collaboration with various artist colleagues. Yet, on entering the second exhibition gallery at YKY, the atmosphere is absolutely quiet, motionless. Together, the pieces could be compared to the relationship of the thought of a writer, with their words engraved in stone. The ideational phenomena of semi-permanence, as record, is cathartic when considering urban flux.

Especially the pieces "Line" (2020), "Reflector" (2020) and "Step" (2020) maintain a symmetrical geometry of right angles. While they might be comprehensible, accommodating to the rational thinker, their placement, seemingly at random on a wall, proceeds to the entrance and confuses with cognitive dissonance. Its simplicity is slanted in the hard but dim light, enigmatic and perplexing. Simultaneously, the noxious aesthetic of "Scum" (2020) mixed with "Passage" (2020) is familiar, yet, as art, both are disconcerting and satisfying, like punk music.

During the 16th Istanbul Biennial last year, American artist Glenn Ligon screened videos out of a mansion on Büyükada Island, "Taksim I & II," observing the storied square, set to experimental music. They piqued interest in relation to the history of James Baldwin, yet on their own, were arguably dull, nothing more than projections of the meaningless hodgepodge that is Istanbul's complicated embrace and repulsion of its and the world's human diversity. "Meydan" does not apologize. It shows what space becomes when there is no space left.