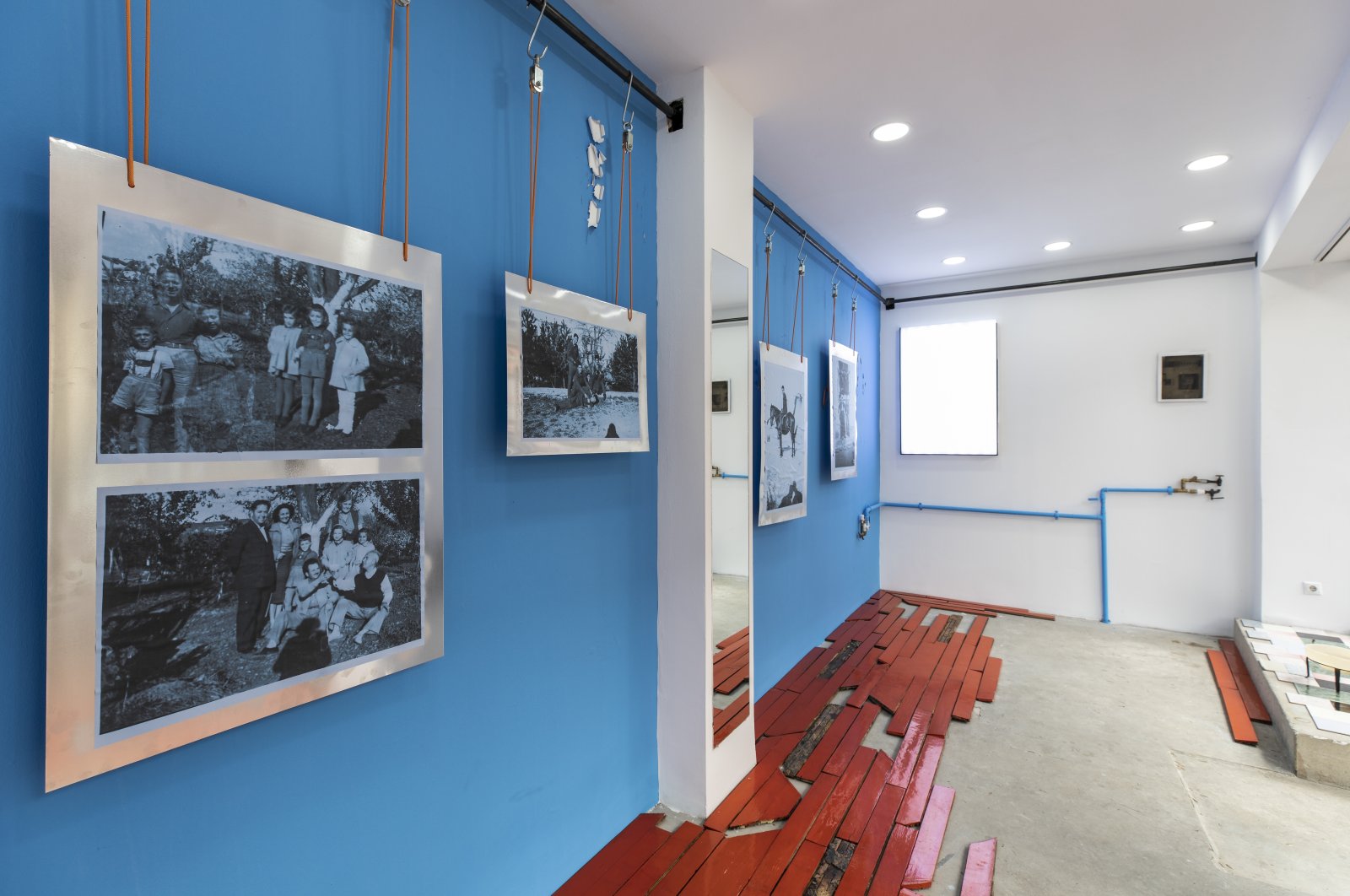 As a unique manifestation of what might be called a storefront exhibition, Viable Istanbul has curated a show with Dutch-Bulgarian artist Eline Tsvetkova for passersby in the fashionable Tomtom neighborhood

Against the rough exterior of a weathered building in a distinctively cultural, residential district in Istanbul, where the avenue of Boğazkesen slopes down like the depression of a valley between the inner-city hills of Tophane and Cihangir neighborhoods, there is a canvas that hangs, loosely, over a rusted, chipped wall. Its white-on-white is surprisingly visible, and while the text is faint, its message is bold. A close examination of its three, terse, expressive sentences, reveals an astute curation by Metin Ilktekin, with peculiarly luring site-specific awareness.

The words offered to describe the modest show are elegant, pointed. The vitrine shop that holds the “collection of interior objects,” is poised to be in a “state of ordered flux.” It is not entirely sure what it seeks to convey. It is approachable, human. The institutionalization of exchanges between artist, curator and city are not stripped of emotional personality, of the psychological complexity inherent in communicating to the public sphere, a gesture that is increasingly fraught with anxiety in Istanbul, where the act of assembly is overshadowed.

As the text reads, the show forwards a “forgotten deserted display,” an apt comment on the nature of the art world, as it has struggled to maintain a physical existence at the end of the frayed shoestring of life under lockdowns and curfews. The vitrine storefront exhibition, ultimately, is a fresh response to a world in which public interiors are a luxury. And inside, as the curatorial text relays, is a “collage of atmospheres.” These phrases are light to the touch, yet capture the exhibition, “Blue Kısmet,” with intuitive grace.

There is one neologism, a portmanteau, “meshmorable” used to identify a sense of the images that Eline Tsvetkova has produced for the show. It captures the vague undefinability of memory in an age where the means of recording the past prompt memories of their own, towards a collective meshing of memories, a latticework of nostalgia through which the present is tinted like the grainy imperfections of antique photography. As the natural faculties of the brain are outmoded, recording technology assumes a power play at once imposing, and cold.

Finally, the textual preface of “Blue Kısmet” ends by quoting lyrics from the 1984 song, “Hand on My Heart” by the English rock band, Shriekback, a new wave violation of soundscape paranoia whose appeal is long faded to post-punk revival dead ends. Under the artful eye of Ilktekin, however, the words to the screechy tune are brilliantly decontextualized to smart effect, “And all of this is not in explanation / It’s just me putting my hand on my heart.” And that, ultimately, is how “Blue Kısmet” feels, a gesture, even if a shot in the dark, sincere.

To look back in wonder

There is only one aspect of “Blue Kısmet” that is not visible to passersby from the storefront window where Viable Istanbul has set up shop in the name of art. It is a bijou closet of a backspace, with an especially evocative image stuck to the wall. Among the six photos that Tsvetkova used as the core material of her show, the one that is relatively concealed is curiously also a representation of concealment, in which three figures, a man in a suit flanked by two women in uniform hold their hands up to block their faces from the camera.

In front of the photograph, with its characteristic pale, airy blue tinge, are vintage wooden implements used to flatten carpets. It makes for a transporting, if disconcerting concoction of visual variables. The literal meaning is unclear. But the show, in general, is not shy about its being an enigma. That is, after all, what it expresses, steeped in the family history of the artist, whose Bulgarian side is uniquely removed from status quo cultural memory, as it would be performed by her Dutch antecedents.

Tsvetkova was in the midst of a residency at Trèlex in Zurich, during which time she felt the sting of isolation, and reached out to Ilktekin and Kerim Zapsu, who, without a budget, mounted her show in Istanbul with the flick of their wrists. The result, while relatively skeletal, endears for its communal sensibility, linked to an artist’s reflexive process as part of the ongoing saga of self-identification amid Europe’s whirlpools of sociocultural mixture. And Ilktekin himself, a Dutch-Turkish curator born and raised in Switzerland, adds a personal touch.

It is invaluable to have included Istanbul’s appreciation for its own Balkan heritage, specifically that of neighboring Bulgaria, within Tsvetkova’s nonverbal visual discourse. As a graduate student at the Royal College of Art in London, Tsvetkova is a welcome presence in Istanbul’s fringe, pro-youth arts scene, where international integration amplifies and complements a largely independent, or privatized sector in support of contemporary, globally relevant artwork.

“Blue Kısmet” is a microcosmic free assembly, not of people, but of objects that bear the traces of human presence. The placement of high-gloss wooden floorboards that stretch along the floor in battered streaks affect the ambiance of a habitation that is fading away, from home to exhibition, country to concept, life to art. The pragmatics of daily domesticity are stripped away to reveal an exercise in the impractical creativity of aesthetically-engrossing, cerebral postmodernism.

In the mechanical imagination

From the street, the five photographs can be seen suspended from the ceiling on ropes and pulleys, with a semi-industrial look, gleaming with a metallic resonance. They seamlessly merge the artist’s family archives from Bulgaria with that of photographs found in Istanbul, perhaps from one of the used bookstores and antique shops around the corner from the exhibition space, hawking the history of the city’s lost, personal possessions. And while the show appears generally slapdash, it does not entirely subtract from the conveyance of its mood.

A pair of photos, placed one on top of the other, against the same panel, show a family outing of a kind, in which children stand under a tree, smiling for the shoot. There is a boy wearing the traditional German lederhosen with the characteristic cross-hatch suspenders in both photos. In the photo beside it, hanging on its own, are a group of men, uniformed, playing in the snow. Yet another shows a young man on a horse, and lastly, another male gathering on a street, below a window, filled to the brim with yet more men.

In every photo on display that can be seen from the street, there are shadows, conceivably of the photographer’s head, or of other observers, in the bottom of the frames. Their silhouettes create an unsettling feel. These subjects are being watched, and they know it. They are wary of it. So, they put on an act. They smile, which is a tradition that all still know in the popular use of photography. But between those captured, hidden, blocking their faces, and the men smirking and reveling, there is a gap, invisible, unimagined, until now.