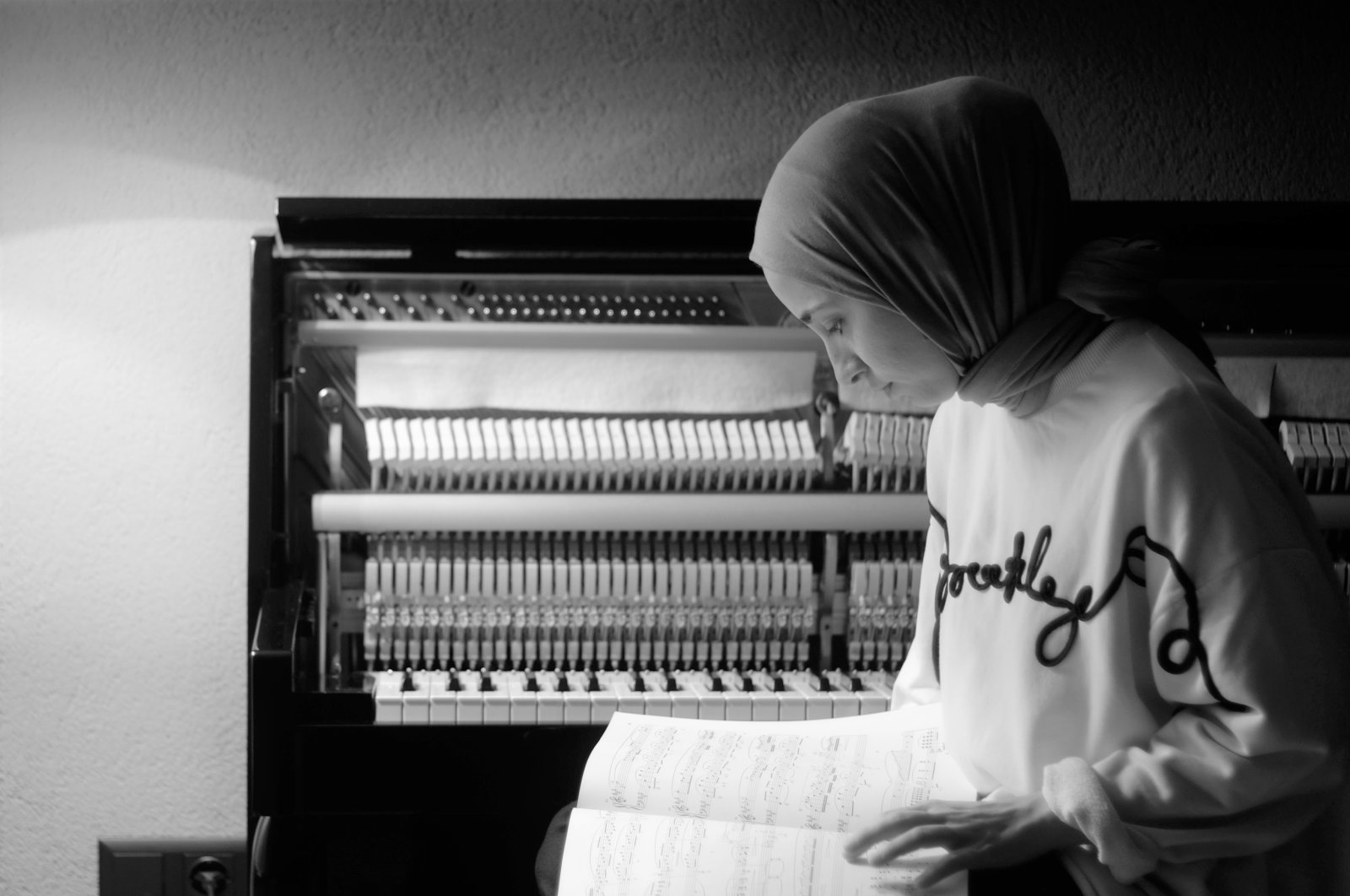 Büşra Kayıkçı fondly works in the fields of architecture, painting and music, which feed off each other, boosting her creativity

On Feb. 28, an elaborate exhibition titled “You Are Prettier This Way,” which tackles a particular period in Turkish history, brought together 16 artists at Istanbul’s Darphane-i Amire. These creators overcome the suppression that they experienced in that time by finding freedom in their art.

In 1997, following the postmodern coup, women were banned from wearing headscarves at various official spaces, including universities. The statement “You Are Prettier This Way” was used by university staff and lecturers to convince young students to remove their headscarves to enter facilities. Named after this phrase, the exhibition was an organization of women who can wear their religious attire in modern Turkey and also express how it feels to be silenced.

I was curious about the presentation of this historical time, which I hadn’t experienced because of my young age, so I read about the show online, as I didn’t have enough time to visit the exhibition myself. The work “Article 42” by Büşra Kayıkçı was the one that drew my attention most in the show as it featured a combination of a piano and a projector behind it. While the right hand plays a few notes, the left plays variations by moving closer to and farther from the other hand.

“Article 42” consisted of two dimensions in auditory and visual parts. According to Kayıkçı, it was an experimental study for her in this sense. In the work, the right hand represents the constant mental authority and status quo of the period as a metaphor, while the left hand represents the women struggling to find solutions to do something.

“It was named after the number of the piano keys," Kayıkçı explained. "In the first half of the composition, my right hand repeats the same pattern between the keys numbered 39 and 43 but does not press the key 42. The left hand tries to touch on the key 42 but the right does not allow it. Ultimately, the left hand achieves this for a short time.” But if you ask what the secret is about the number 42, the answer is in the Turkish Constitution. Article 42 in the constitution says, “No one shall be deprived of the right of learning and education,” which was clearly violated during the postmodern coup.

Mesmerized by this work, I had a chance to catch up with Kayıkçı. She is an interior architect, artist and musician. Born in 1990, her journey with art started at the age of 9 when she attended a classical Western music piano and solfege class at Müjdat Gezen Art Center in Istanbul. While her musical education continued for 10 years, she also received training in classical ballet and modern dance from Oya Ölçen, who opened Turkey's first ballet school. In high school for about four years to prepare for fine arts, she also attended the professional painting classes of various artists who graduated from Mimar Sinan Fine Arts University.

With the guidance and support of her family, Kayıkçı's educational background was intertwined with art. Naturally, her choice for her future job was music. Her conservative family, however, wanted her to make a more rational choice. This is how she stepped into the world of design as an interior architect.

Although she has an interest in three different fields, Kayıkçı sees them all as intertwined disciplines. “In addition to common aspects among them, they also feed on each other in many respects. My focus on painting is colors rather than formats. Especially in watercolor paintings, colors’ speed to adapt to each other relaxes my mind and creates a desire to carry it to the auditory dimension. Therefore, I try to capture this harmony in music with form. By the way, I generally paint illustrations, children's books and city sketches in recent years. When we say architecture, in fact, the nature created by the first architect and the effect it had on the human spirit, the places with a spirit created throughout the history, and the landscapes are the subjects that inspire me,” she said.

During her creative process, Kayıkçı reads the stories and watches the films of women who have proven themselves in any field and have helped humanity, which touches her greatly. Another big inspiration source is American composer and pianist Philip Glass. “Glass, one of the pioneers of minimalist music that I work on, has worked in all kinds of jobs, from wall painting to taxicab driver, to sustain his life. In the time left for himself, he has freely focused on the music he wanted to produce – something I always keep in a corner of my mind," she said.

As for her interest in three separate fields, Kayıkçı said that she does not try to manage all of them at the same time as she wants to produce something that will satisfy her. Noting that she has a slightly hyperactive mind, Kayıkçı believes that diversity does not tire her out; on the contrary, it makes her feel good.

Even though her background in painting and music goes far back into her youth, she is largely nourished by the discipline of architecture. “I needed a thought system to guide me. I had a lot of artistic data but I was having a hard time putting them together with proper math. In that sense, the faculty of architecture gave me a stance," she said.

The artist naturally has a very neat daily routine to deal with some parts of her three different fields. At her mini-workshop in the Kuzguncuk neighborhood, she paints and performs with her piano. While creating beautiful watercolor paintings, she makes improvisations by learning different harmonies.

Focusing more on composing rather than just playing piano, in line with her musical training, Kayıkçı released the single “Doğum” ("Birth") as her initial composition. Encouraged by its success, she prepared her “Eskizler” ("Sketches") album. The album consists of the improvisations that she made in 2018 and 2019. “It was written at a time when I was looking for minimalist forms and different harmonies on the piano. That is still going on. I wanted to refer to my other identities by the name 'Eskizler.' This word means the first sketches during the starting of a project. This album is in the sketch stage for me in terms of both recording and compositions. I dealt with everything in the album on my own, and it is out there with its pluses and minuses. Nevertheless, it has made a more overwhelming impression than I guessed and I have received good feedback – which has made me very happy," she said.

The latest composition by Kayıkçı is “Tuna” ("Danube"), which is a very special project in every sense for the artist. In the autumn of 2019, Kayıkçı decided to collaborate with her poet-writer friend Furkan Çalışkan. She chose to compose Çalışkan’s poem “Tuna Kısmet” ("Danube Fortune"), which was written in Budapest in 2015, and record it in Hungary. “By coincidence, I had the opportunity to visit a piano workshop in Hungary," she said. "The workshop belongs to David Klavins, the designer of the Architizer award-winning pianos. He is both a pianist and a piano technician. I played their piano for four days and recorded my compositions at night. Klavins designs and produces pianos named Una Corda, which work on the principle of a single wire for each hammer. Una Cordas are not instruments made for classical music. They are rather an alternative instrument and sound for musicians working on modern classics and minimalist music like me. I recorded 'Tuna' with this piano. The song has become extremely organic and fluid. From the record, you can clearly hear the sound of piano hammers, wires and felt fabric placed between them.”

“I can say that ‘Tuna’ was a unique experience. It has returned to its birthplace, homeland in another form," she added.

The skilled artist wants to present a delightful, diverse composition in her future plans, noting that even solo concerts are now rendered in three dimensions. She stated: "There is a more dynamic process that appeals to both the eye and the ear, which the audience enjoys very much. I would like to combine my music with architectural installations. Surely, I will apply this plan to my exhibitions as well.”