Miracle of seeing: Looking forward with art of Selim Birsel 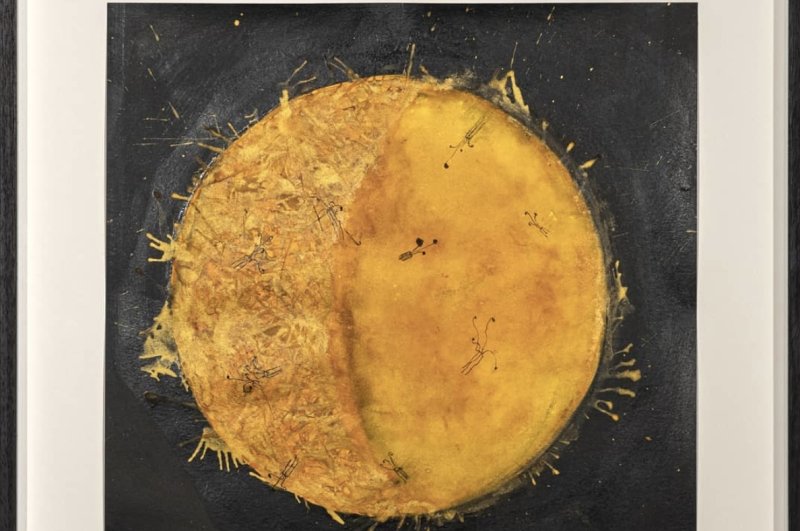 For his first solo show at Öktem Aykut, a small gallery down an alley in the historic environs of Istanbul's Şişhane neighborhood, professor and artist Selim Birsel presents 'An Isolated Gaze,' based mainly on new artworks since 2017

Review: 'Avatar: The Way of Water' still blockbuster after 13 years

Blue paper covers three glass doors. Inside, the walls are textured with a rough concrete finish. Place a hand on them, and the will to be elsewhere disappears. And no one will see, because the interior is a world within a world. Bent and obscure, the streets outside are a pastiche of unspeakable silences, wayward possibilities and undrawn maps. The bright lights above beam, shock and blanket artwork in the miracle of seeing. And that is what the artist intends to inspire in his faithful seers.

To look is more passive than to gaze. The latter implies a concentrated, meditative staring tantamount to hypnosis, an altered state of mind, induced by the innate, human power to merge the mind with the eye. The illuminations of consciousness await. All that is asked is to open that involuntary mask of lids that keep a person from tripping. But to step into the space of Öktem Aykut is to enter into a realm where the subtle, genuine air of creativity is intact and flowing in circles of a consolidated momentum led by the young pair of gallerists.

Selim Birsel is a welcome addition to the exhaustive history of artworks exhibited at Öktem Aykut, mounting hundreds of shows in their former space around the corner in the eyeshot of the cobblestoned shadow of Galata Tower. Now, down a flight of stairs across the street from alternative galleries under Adahan Hotel and at the Kıraathane Istanbul Literature House, Öktem Aykut has preserved its distinctive place, as a conceptual sphere whose core is untouched, while its surfaces mingle liberally with the greater milieu of the Turkish art world.

“Passive Defence” (2020) is an installation concept piece that bears something of the trickster role of the contemporary artist, a stripe of behavior well applied by Ayşe Erkmen for “Whitish,” her solo retrospective at Arter. But as Birsel wisely considers, sight is also a function of its opposite. The pitch darkness of the cinema is what stirs the scintillant flow of its projected, celluloid magic. In like spirit, the show, “An Isolated Gaze” at Öktem Aykut offers a telescopic entrance to a night sky of such broad perspectives on the visible of creation.

Jumping off from a composition of ink on paper conceived in 2017, titled, “States of Planet I,” Birsel adapted his circular focus into a sequel, and a new vision, “Tank Lilium” (2019) after similar color schemes and explorations of form. With resemblances to a hydra-headed incarnation of that self-reproductive being known to Greek mythology, Birsel’s ink painting expands the notion to a modern military subject, however abstracted and transformed into the image of a flower, or more exactly a lily.

But with an industrial twist, the Lilium has become a buzzword for an electric-powered commercial air taxi invented by a German startup. And with Birsel’s ecological futurism at hand, the simple image of a post-impressionistic flower gains ground in the field of science fiction, in which technological empowerment, independent of the prevailing infrastructure, has unseen, more nefarious consequences than ever imagined. Yet, for all of its context, there is beauty in his scarlet petals, run through with jade filaments over a mottled lime background.

His other two large-scale works of ink on paper on display, stretch about 150 square centimeters and have the mesmerizing effect of situating an objective, planetary observation of Earth through a personalized, creative lens, and, more in the mythopoetic guise of Gaia, as a single organism. Whether covered in a verdant array of leaves, or darkened feathers spruced with crimson fletches, the avian globe flies, motivated by the principles of a perennial garden, which Birsel’s show explicitly expresses in its curatorial text.

“As in all attrition and collapse, he suggests that we start by focusing on our own garden, reorganizing it with what we have come to find in our sacks, and making it bloom again,” reads the gallery statement by Öktem Aykut, in which they identify Birsel’s practice as a conceptual frame encompassing collective impulses that defined the spiritual and intellectual histories of the Enlightenment, Ancient Greece and Mesopotamia. “To do this, we need to redefine both the contents of our sack and our garden and to persevere with goodwill.”

To see with open eyes

The first of two floors at Öktem Aykut features a long-term installation, developed over the course of a quarter-century, titled, “What Expense” (1995-2020). A pile of wood and rubber stamps is strewn beneath a square column, set on the cracked stone ground at the feet of two paintings. The roughly hewn blocks are blackened with ink, barely revealing their cuts, modeling the weaponized vehicles of armed industrialism. A tent canvas sprawls from a corner of the gallery, detailing a spattered collage of faded stamps.

Up a cold stairwell, the artist’s “Red” (2006) series floats, ascending along the bare wall. The piece, “Isolated House,” is especially fitting for the motifs, and lexicography of the show. Also devised with ink on paper, the textural flushes animate a burnt aesthetic, of a blank landscape flooded with fire and blood, darkening cloud-like at its center, wherein the silhouette of a lone house stands at the swirling cusp of a postmodern impressionist’s whims. The pieces in “Red” are macabre enough to blind with a deep gloom evoked by their titles.

The figure of a gunslinging solitary man is portrayed beset by emptiness, in “Running For No Reason,” only to confront with such nightmarish renderings as “Red Desert Storm,” “Spitting Blood,” and “A Bowl of Pain.” But more abstract than representational, Birsel has ever found his muse in the classic, painterly ambiance of the French countryside. In late 2017, together with Sinan Logie, he presented a series of works celebrating the legacy of L’Estaque, a village near Marseille where Cezanne developed much of his post-impressionist style.

“Variable Skies” (2019) is comprised of 10 ink paintings on paper, topping off Birsel’s inaugural Öktem Aykut show, “An Isolated Gaze,” with refreshed insights into his practice, which while also steeped in conceptualism and transdisciplinary multimedia, remains, at once, approachable in its simplicity. His colors are as unique as the moods of his naturalist forms, which carefully, like the hint of a riddle, are heard softly, recurring in thoughts often forgotten, but that return with the sharpness of clarity that prompts the act of stillness on a cold winter’s day.

Review: 'Avatar: The Way of Water' still blockbuster after 13 years