‘Monet’s Garden’: Online show in search of a man of nature 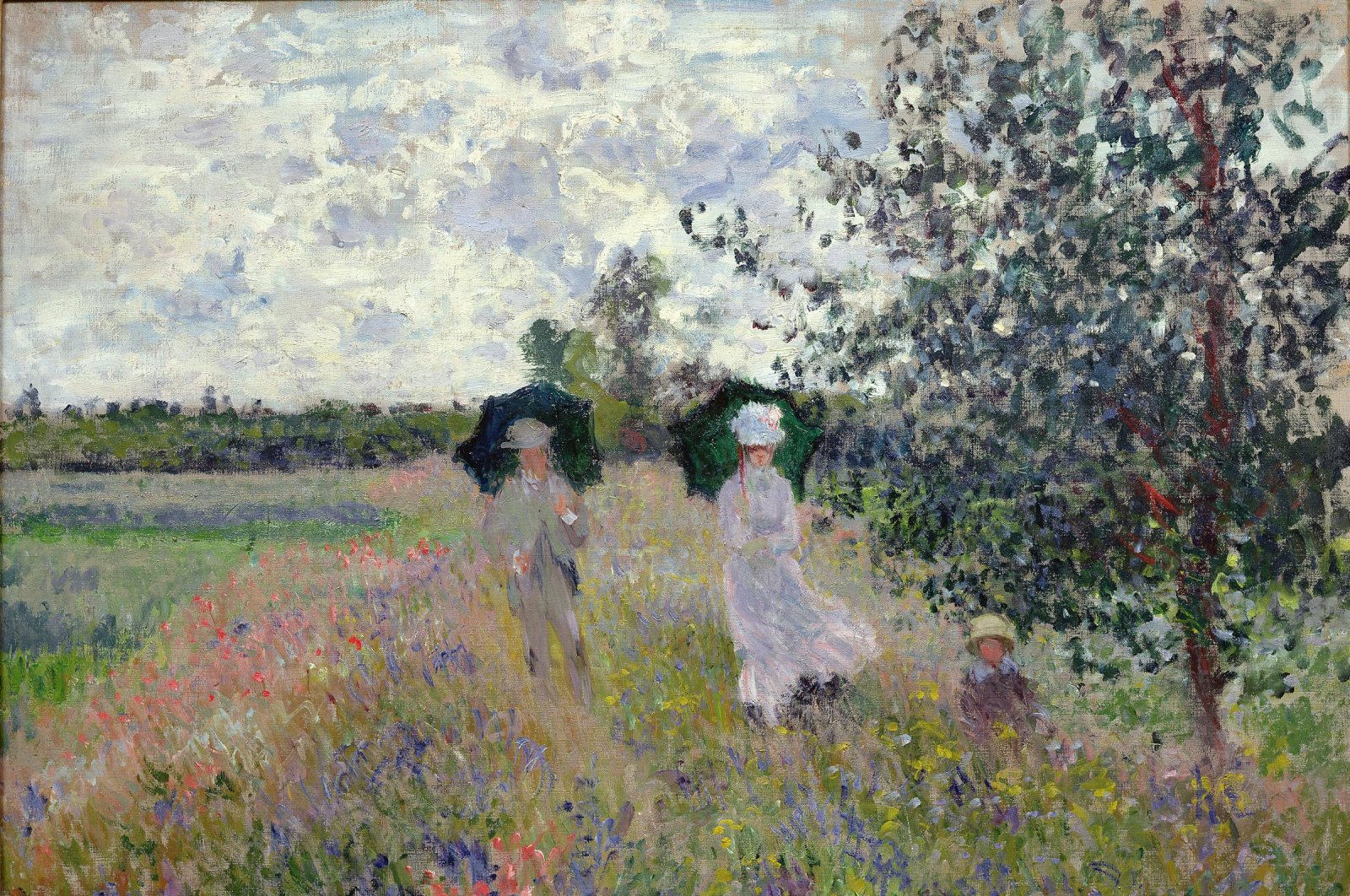 Famous painting "Taking a Walk near Argenteuil" takess place in the section of "In Search of Giverny." (Courtesy of SSM)
by İREM YAŞAR Jun 25, 2020 2:12 pm

Along with his interest in horticulture, painter Claude Monet is known to inspire the artists of the next generations with his innovative approach in his artistic career. Discover the artist’s life and oeuvre with the online Istanbul exhibit

With everything changing during the coronavirus outbreak, art events, including exhibitions and concerts, were carried from museums and galleries to digital platforms. Even though Turkey began the normalization period gradually, leading to many museums and galleries reopening, many institutions continue to host their events online.

During the confinement measures, Istanbul’s leading art institution Sakıp Sabancı Museum (SSM) began sharing its previous rich-content exhibitions through its digital channels with a wide selection. Recently, the museum added the exhibition “Monet’s Garden – Masterpieces from Musée Marmottan,” which had been held from Oct. 9, 2012 to Jan. 6, 2013, with the contributions of Sabancı Holding, to its online selection to mark its 10th anniversary of the founding. The Monet show is available on SSM’s website, social media accounts and its YouTube channel.

The exhibition, featuring the works of French painter Claude Monet, one of the founders of the Impressionist painting movement, was organized in collaboration with Musee Marmottan Monet in Paris, owner of the largest Monet collection in the world. A large portion of the selection in the exhibition includes paintings depicting flowers and nature with a focus on Monet’s Giverny Garden, the main theme for him during the last years of his life.

The exhibition provides a detailed overview of Monet’s productions which are a turning point in the history of art. "I perhaps owe having become a painter to flowers,” Monet says. Monet learned to work on landscapes in the open air with the guidance of French painter Eugene Boudin at a very early age. However, he never preferred to copy the works by established artists. He drew what he saw in his window, which was perhaps what made his pastoral canvases very impressive.

With his great desire to depict nature, it is not astonishing that he became one of the fathers of Impressionism. The Impressionists refused to position the human being as the center and master of the universe by criticizing Western art’s tradition continuing since the Renaissance.

Monet traveled to landscapes in many places including Normandy and Norway. He moved to Giverny, which is a small village some kilometers away from Paris, with his wife and children in 1883. In this secret heaven, he grew plants and flowers, which he painted over and over again until his death in 1926. When you visit the exhibition, you see that his latest paintings featuring garden landscapes, water lilies and Japanese bridges are a production of his passion for gardening and family life.

Monet’s life through his oeuvre

SSM’s exhibition gives a chance to explore Monet’s life through his oeuvre. While the visitors see how his art evolved over time with his canvases, they can also listen to the story of his life and paintings through informative sound recordings prepared specially for each painting.

The first section of the SSM’s exhibition, “A Family, A Museum,” reveals the story of the Monet family. The visitors learn how Monet and his wife Camille Doncieux fell in love and grew a family. Upon Camille’s premature death, their two boys were raised by Alice Hoschede⁠ – Monet’s second wife⁠ – alongside the six children from her first marriage. This was when Monet painted a portrait of Jean at the age of 13 as well as several portraits of Michel as a baby, with a bobble hat, and in a blue sweater.

In the “Search of Giverny” section, Monet’s love for nature and unspoiled landscapes far from the hubbub of the city is explained through his story of settling in Giverny.

When visitors click to the “Normandy and Beyond” section, they will be introduced to the travels of an artist in search of different pastoral motifs appealing to his taste. Monet’s destinations were varied, and he spent time in Italy, England and Norway. Of all these destinations, Normandy held a special appeal, therefore, named the section.

The later “The First Water Lilies,” “The Grandes Decorations” and “Floral Splendour: A Painter and Gardener” sections are all about Monet’s lifelong passion for flowers. If you love plants, you will get lost in his paintings elaborated with his exotic brush strokes and austere touch.

The “Last Painting” section informs us that Monet painted his last pictures between 1918 and 1924. As his sight was severely impaired in this period, he reflected his vision blurry. In “The Path under the Rose Arches,” for example, he paints with a palette made up exclusively of greens, yellows and browns. Even if it is difficult to understand the motifs as they are dissolved, it is one of the most satisfying pieces in the exhibition. The artist, who habitually destroyed works he did not like, kept his works during his cataract years even after he had an operation and regained his sight. It would inspire the abstract painters of the second half of the 20th century.

The texts that the art historian and writer Emmanuelle Amiot-Saulnier wrote for the exhibition catalog, exploring Monet's interaction with the art environment, his relation with nature and the transformation of this relationship over time, are out once again as part of the online exhibition. Moreover, the Monet conference series, which was held at SSM in connection with the exhibition, has also reopened. The conference series features the effects of the artist's works on Turkish art and the relationship between the Impressionism movement and the art market, as well as the representation of nature in his paintings. The series consists of speeches by academics and art critics Burcu Pelvanoğlu and Osman Erden, and Line Calusen Pedersen, a curator at Ny Carlsberg Glyptotek (Copenhagen).