Naming the 'Untitled': The concept art of Sarkis 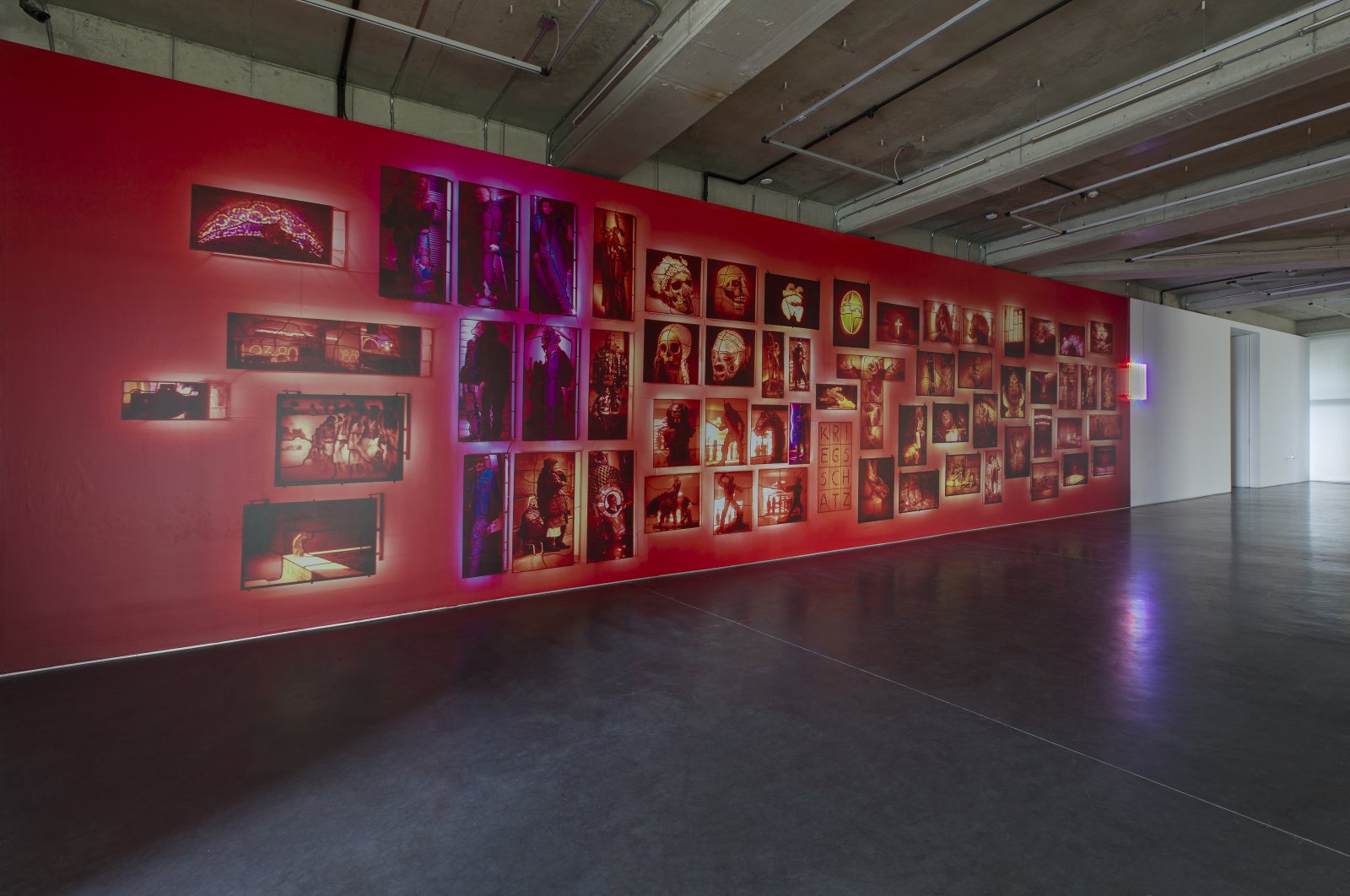 An exhibition view from "Untitled" at Dirimart Gallery, Istanbul. (Courtesy of Dirimart)
by Matt Hanson
Sep 14, 2020 11:10 am

For his new installation series of conceptual art and photographic multimedia at Dirimart, “Untitled,” Paris-based veteran artist Sarkis draws from his Turkish-Armenian identity to visualize the sacred

In his ninth decade, Sarkis is still on fire. Born of the ashes that provoke nostalgia among his multigenerational kith of old Istanbul, he is, excuse the cliches, a living legend of Duchamp-like grandmaster status, particularly among art world aficionados. For his most recent opening at Dirimart on Sept. 10, titled “Untitled,” he zoomed in for a call with fellow culturati from Paris, delighting collegial curators, publishers and intellectual comrades of all stripes from that city of luminaries where he has lived and belonged to since the 1960s.

Digital patchworks of scannable QR codes are placed at each end of the expansive main gallery floor inside Dirimart, a decidedly commercial outfit earnestly affirming Turkey as integral to the critical establishment of art and the development of its international canon. Situated amid the bustling din of the Dolapdere quarter in Beyoğlu district, the socioeconomic diversity of the overburdened, urban environment contrasts with unequivocal contemporary visions of newly curated art alongside the inner-city freeway’s growing cultural ecology, shared with Evliyagil, Arter and Pilevneli galleries.

Not weighed by history, as the local communities appear to be, so many low-income migrants and minorities who endure various manual labor in the surrounding neighborhoods, Sarkis places an everlasting, however virtual, flame within the palms of his venturesome seers. To forego the risks of an ongoing global pandemic that has claimed nearly a million lives and to bear witness to the life of objects and experience firsthand with its spatial dimension, a person essentially takes their life in their hands.

But as the trickster that he is, Sarkis turned assumptions around and has, in place of a purely palpable and immediate course of sense perception, reproduced computer simulation, only site-specifically, as an image beheld within an image, perhaps analogous to the idea of a dream within a dream.

As a concept artist whose primary medium could be said to be that of the installation, Sarkis has made a career out of producing work that defies much of the material objectification that would circumscribe originality and creativity into an intellectualized commodity that while valued abstractly, is still arguably dependent on the industrial complex for its existence. His art perpetuates the postmodern focus on the greater contexts in which works are shown, be it in a gallery, museum, city, community, nation, aesthetic or theoretical movement.

Two of the broadest walls within the interior of Dirimart face each other with blood-red inflammations of visual lore, which Sarkis collected over the years behind the uncanny lens of his distinctive photography. Shot through with beams of light, the past rears its ugly head, blazing like an inferno of the archetypal subconscious, replete with a surrealistic menagerie of skulls adorned with 18th-century wigs and Lakota headdresses, prehistoric goddess statues, German words, African ceremonialists, street life and varieties of architectural perspective.

At the very end of the crimson-suffused smorgasbord of images, a band of neon tubes electrifies the air with a shock of rainbow hues. It is to symbolize the future that awaits, like the mythical pot of gold, before all goes white, and the mystery of the unknown that awaits emerges as a blank slate of unconsciousness. But these pictures are broken, and there are ample glowing forms of the crucifix throughout the show. Only it is not by way of occidental history that Sarkis approaches his subjects.

Inspired by the peculiar craft of cracked pottery in Japan, known as kintsugi, Sarkis did not merely appropriate exotic knowledge like any kleptomaniac Orientalist but instead fused, both conceptually and physically, the Japanese technique with his special adaptation of stained-glass. The result expresses a powerful, and lucid continuity between his materials and the histories and ideas that he has sought to convey with them. Across from the temporal, collagist mural are individuated works of fissured photographic panes.

One of these pieces portrays a man walking through the rubble of Istanbul in the bitter wake of two days, known as the September events of 1955. And beside him, hanging on the adjacent surface is a pictorial arrangement inspired by the tragedies after a painting by the late Turkish artist Aliye Berger, often sharing her reputation with Fahrelnissa Zeid, her sister. Although Berger was middle-aged when she made the piece, it is a bleary-eyed smog of confusion, something primal, child-like or enraged.

Intermission for the avant-garde

To break up such concerns as that which Sarkis addressed as a public figure and progressive freethinker in his own right, the curation of “Untitled” draped a Persian rug over Dirimart’s gallery floor in the front of an original painting by Sarkis, which he also enlarged as a video work. The eye-shaped smear of orange and white looks over the complex weave with Farsi calligraphy from the “Book of Kings,” which inspired Morton Feldman to notate music, “Spring of Chosroes” (1976), based on its patterns. It resonates with the ideas of Sarkis.

The original Berger painting, titled “Fire” (1955), has been compared to the inimitable 1893 canvas “The Scream” by Edvard Munch for its bewildering coloration. On loan from the personal collection of Sarkis, the mystifying frame of emotional outpouring hangs around the corner in a smaller, contiguous room at Dirimart, where the more intrepid art lovers of the season may wear gloves and handle limited edition publications by Norgunk, a literary cohort of Sarkis and other freethinking artists and writers based in Istanbul.

Among the volumes in reference is one called, “The Treasure Chests of Mnemosyne,” which Sarks edited with art historian Uwe Fleckner, piecing together texts by Plato, Frierrich Nietzsche, Marcel Proust and Jacques Derrida where the cerebral heavyweights have hypothesized on the nature of memory. Mnemosyne, of course, is the Greek goddess of memory, celebrated as the mother of muses. And although the work of Sarkis has practically fallen off the edge of modernity because he is so utterly contemporary, “Untitled” contextualizes his oeuvre more reflexively.

Smack dab in the center of the exhibition is a burned wooden crate. It is a revision of an earlier work that he last showed in 1992, when a Turkish art critic insulted him outright, personally, professionally and intolerably, targeting his identity. Sarkis did not respond in words but by creating art. The neon evocation of his birth year, 1938, with an added 0, made for a bold statement, in which the artist exclaimed his immortality. While the indecorous railing of the art critic is long lost to the paper mill, in the year 19380, Sarkis will live on, on fire, red with life.