On being water: A group show at Istanbul apartment gallery 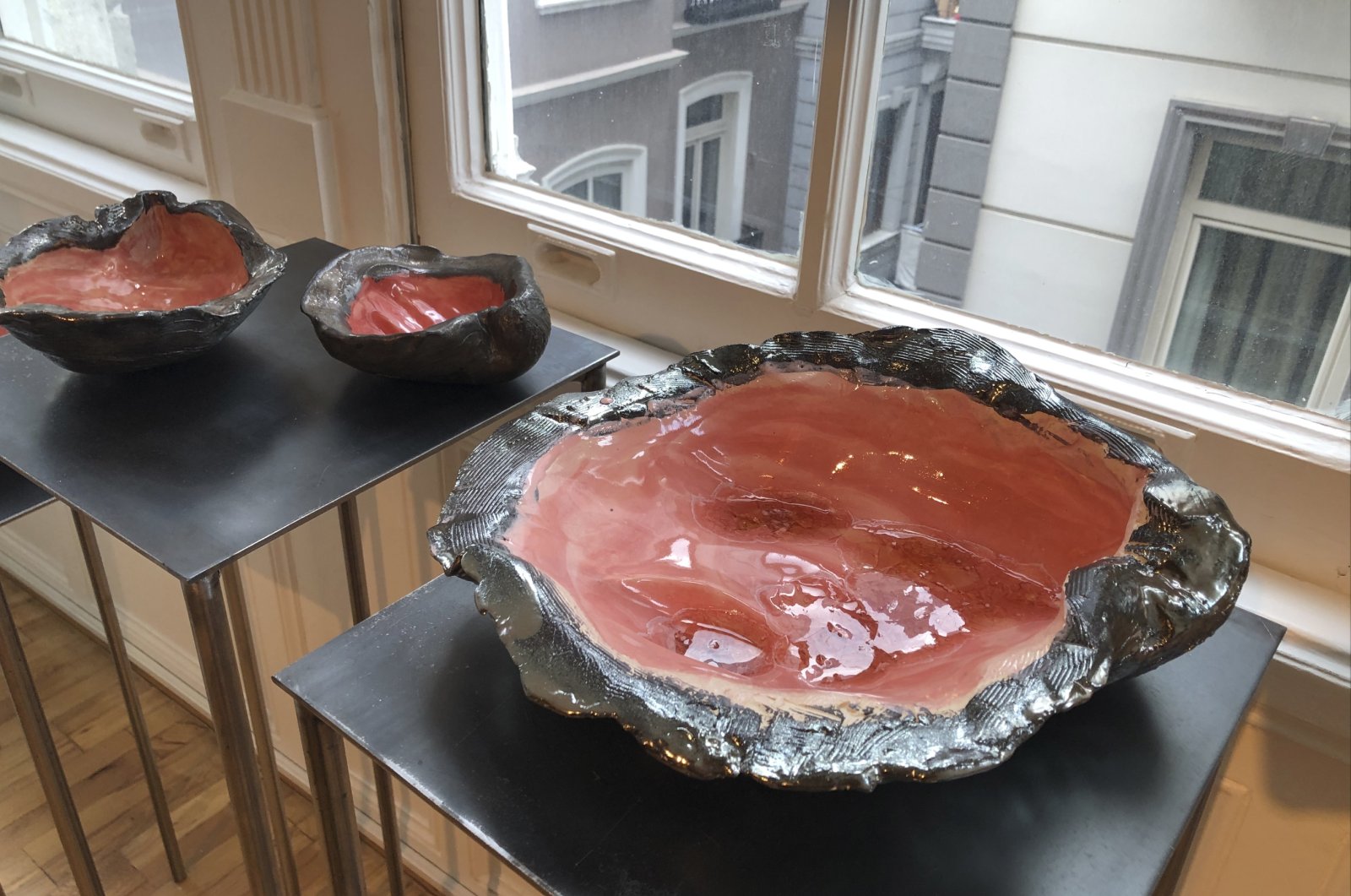 The organic phenomenon of fluidity has become fundamental for the expression and pursuance of millennial identity, both individually and collectively, as social roles and their meanings interchange and evolve according to a constant flux of new dialogue between people who, in the past, would not have had a chance to speak or to say exactly what is on their minds, and in the process, earn the reception of a broad, attentive public listenership.

The liquid metaphor poses a sense of environmental immersion, which is prescient in light of current climate science. The idea of fluidity, in art and society, forecloses the history of understanding nature on human terms and reimagines the human body and psychology on nature’s terms. While the definitions that separate humans from nature are subject to critique, the origin mysteries of progressive predominance and self-consciousness remain intact.

The show “Fluid Dynamics,” curated by Özge Yılmaz, brings together a variety of works made by young and seasoned artists alike in past years that, when seen together, reflect a growing milieu of artistic, ecological integration. Less concerned with abstraction and aesthetics than the creative science of relationships formed to living habitats through the practice of skilled crafts, the eight artists explore the intimate mutuality of earthly existence.

Most immediate is a video installation by Sibel Horada, whose sensitivity to symbolism in nature is apparent in her clear and green oeuvre. “Flow” (2019) is a three-minute loop of a grainy, black-and-white waterfall housed within an LED screen that rests atop piles of what the artist calls “excavations,” but which appear to be the ruins of a constructed building, as fragmented concrete blocks reach out with twisted metal rods that once held them together.

Horada’s “Flow” presents intriguing contradistinction, playing on the common notion of nature as reality and the artificial, whether a construction project or a work of art, as somehow different, reflective of the peculiarly human penchant to alter and transcend realness. The scenic, verdant beauty of waterfalls, surrounded by trees and mountains is oblique because it is, in fact, a video screen. What is real lies below: smashed, misshapen blocks.

The installation has a curious relation to that of Istanbul-born, Berlin-based architect Yelta Köm, whose video installation “Possibilistic Grounds” (2021) further investigates the mineral connection to fluidity. Köm has honed his sights on lead. A suspended, flat monitor hangs above a topographic mound of black granules covered meticulously with the contours of a model highland landscape.

“Possibilistic Grounds” moves from waterfalls to mountains to show how the seemingly immoveable heights of towering crimps in tectonic plates are suffused with liquidity and retain elements of its coursing. From within, by heating the ore of its stone, the mountain has literally fluid energy. In the word liquify, assets become debts in a way similar to capitalist industry, where a mountain may boil down to a sum of currency.

Horada produced “Flow” in 2019 as part of programming for SAHA Studio, which was also the case for a piece called “The Way” (2019-2020) by Alper Aydın. In Istanbul and Izmir, having found startlingly bucolic locations, overarched with the canopies of healthy forests, Aydın stepped into a stream and for a substantial length of time, patiently sculpted a spiraling pattern within a circle made of clay.

The eight-plus minutes of “The Way” documented the artist’s dedication to the sacred geometry of symmetrical, aesthetically pleasing forms that, unlike the “excavations” beneath “Flow” speak to a higher order of creativity than that of pure utility, toward the visualization of idea as reason. Between the works of Aydın and Horada, waters, real and digital respectively, run through manifestations of human civilization, its persistence and ruin.

From the Aegean coast, artist Emine Boyner Kürşat has affected an especially holistic alchemical notion, one that is not dusty with medieval historiography but that continues, despite the historical regressions of human thought, in the depths of the sea. She has focused on oysters for their natural ability to subsume and refine their environment. Her polished ceramic sculptures are not only well shaped but dyed by her own resourceful efforts.

Gathering plants and berries, and distilling their colors, Kürşat painted the underside of her oysters' clay pink, resonating with the earthy tones of the piece by Aydın. In the hallway of Versus Art Project, an attribute shared among the old apartments housing galleries, such as at Poşe, Daire or Martch Art Project in Istanbul, Kürşat spread out a long painting on paper, using her own blends of wild-harvested dragon berry and wood ink.

Under electric pink lighting, “Rooted” (2020) shows a succession of trees, framing their bold, gnarled trunks. Their wide bodies resemble the mushroom clouds of atom bombs detonated across a post-apocalyptic desert. With a certain eye, they have a watery mold, as waterfalls upside-down, flowing up from the ground. The surreality of her light sketches is well paired with a VR film “Floodplain” (2020) by New York-based Deniz Tortum.

Due to the pandemic, VR headsets are banned, and so, the result is all the more eccentric from normative perception. It follows the fictional plot of villagers lost in the woods, beginning with four people, sleeping in the shadow of a stunted tree that shape-shifts, dreamlike, as they lay on the mossy, viridescent soil. Together with Kürşat’s vibrant oysters, and hair weavings by Horada, “Fluid Dynamics” has a fairy-tale mystique.

The show is grounded by one of the younger artists, Berka Beste Kopuz, whose series, “Untraceable” (2021) follows a site-specific installation, set within a closet of space inside Versus Art Project, a world within a world that comments on the disappearance of underground streams in Istanbul. Kopuz’s piece is a powerful, investigative work on the destruction wrought by overburdened urbanization as it affects not only the quality but the existence of water.

If Istanbul were a person, they would be dehydrated. In metaphorical terms, the lack of fluidity is indicative of a social comment that, through criticisms and solutions, the eight artists at Versus Art Project have grappled with, as curated in enlightened detail by Yılmaz. There is an especially emotional work in photographs of a performance piece by Gülhatun Yıldırım, who is shown prostrating, offering a lit candle, to a carafe of water. She is pleading, as she pours it over herself, for its return, within and without.