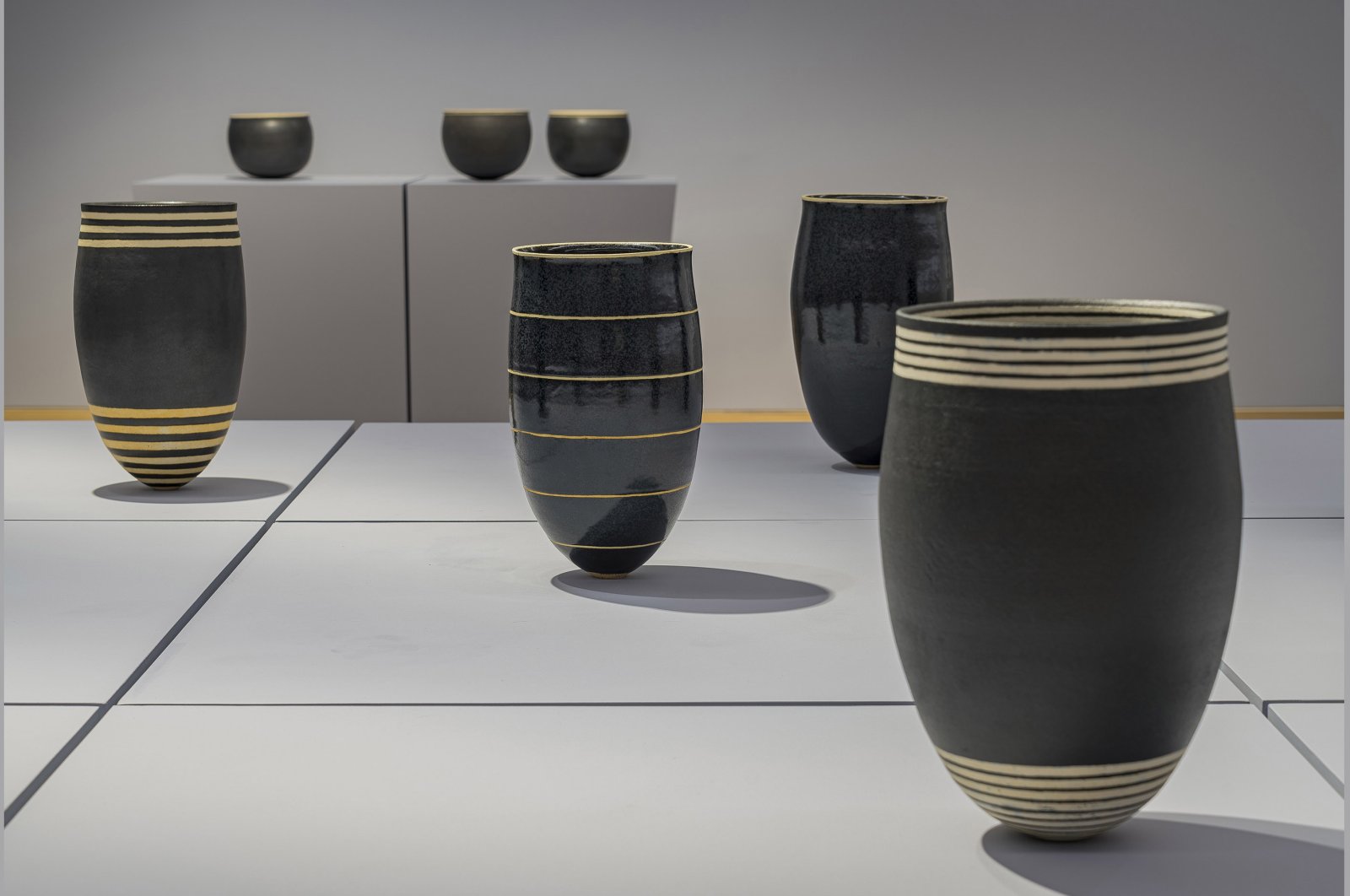 As part of the latest series of Arter exhibitions for the winter season, 'Repetition,' curated by Eda Berkmen, the stoneware bowls of Alev Ebüzziya Siesbye are precise appreciations of cyclical creativity

Minimality has a profound effect within broader, societal contexts suffused with varieties of materialistic overstimulation. That is the potency of "Repetition," at Arter in a quarter of Istanbul's Beyoğlu district, a show spotlighting the ceramic ingenuity of Alev Ebüzziya Siesbye. In spare sets, the bowls of Siesbye sit atop colorless, sharply rectangular pedestals, and along a shelf neatly carved with right angles and straight lines into a wall, backlit like artifacts at an archaeological museum. The air is wholly contemporary, fresh with the long, deliberate life of the artist.

In her eighth decade, Siesbye is a cultural treasure for Turkey, where she attended sculpture courses at the Istanbul State Academy of Fine Arts from 1956 to 1958. After a career between the European cities of Copenhagen and Paris, developing her ceramic craft in commercial and artistic fields, the Turkish and Islamic Arts Museum celebrated her life's work with a retrospective in 2002, encompassing pieces that she had been producing since 1964. Her first solo show was in Copenhagen in 1971, at the Galerie Birkdam.

Fifty years later, Arter poses the singularity of her craft anew. The curation of Eda Berkmen, known for her careful treatment of such 20th-century Turkish artists as Nil Yalter, who, coincidentally, was also born in 1938, later working in Paris decades prior and concurrently with Siesbye. In contrast to Yalter, whose multidisciplinary artistry spanned and transcended the bounds of genre and medium, Siesbye had steadfastly honed her meditative practice to a fine point, or for a more appropriate metaphor, to a circular curve.

The bowls of Siesbye provoke an immersive suspension of temporality. To see and walk among them is to bask in the resplendence of ample time, as their bodies mirror the spiraling passage of the ascending and descending sun, as the Earth rotates clockwise and counterclockwise with immeasurable three-dimensionality. The gallery in which "Repetition" is exhibited at Arter has an ameliorating silence. In curatorial texts, Siesbye's bowls relate to the bronze of Assyrian ritual, Himalayan singing bowls, Buddhist and Christian temple bells.

Further entranced by the delicacy of her touch, Siesbye sought to minimize the size, shape and colors of her work to an unprecedented degree, crafting the pieces exhibited at Arter exclusively for the show in 2019. In musicological terms, the Berlin-based composer, producer and performer Nils Frahm exercises a similarly inventive restraint, mixing subtle tinges of organic and electronic innovation. A kindred creative, Siesbye nuances decorative pieces into the realm of critical artwork.

It is peculiar to the human experience not merely to use tools, such as a ceramic vessel, for their functionality, but to focus on their form, firstly, as the prime cause and purpose for their original creation and ultimate end. Arguably, that is the underlying property that instills the bowls of Siesbye with their supernatural quality. In her words, Siesbye drew inspiration from a Sung Dynasty horse and monumental Mesopotamian figures, the Sphinx, Archaic Kouros and early Anatolian statues, Hittite reliefs and, as she explained, "endless blue seas."

In the archaeological record, ceramic bowls evidence some of the earliest examples of technological and cultural advancement, going back before the Neolithic era. It affirms the cyclicality of the prehistorical imagination into modernity that their craft remains at the center of human culture. In the months following the first anniversary of Arter's inaugural reopening in its Dolapdere space as Istanbul's flagship contemporary art museum, the warmly inviting, earthen bowls of Siesbye are a welcome addition to an otherwise abstract art world of theoretical dematerialization.

At the same time, Siesbye's approachable bowls are no less erudite or conjectural than even the most puzzling of nonrepresentational installations. "Repetition" is inspired by a philosophical novel by the same name, written by Danish polymath Soren Kierkegaard. As a longtime resident of Denmark, Siesbye is apparently steeped in the nation's canons of thought, including their often infamously bleak outlook. It is complementary to the patience she had to endure to make her latest series of bowls, with painstaking attention to the slightest deviations.

In an unpublished book Kierkegaard wrote before "Repetition," titled "Johannes Climacus," he asserted, "When ideality and reality touch each other then repetition appears." As a student of Socrates, Kierkegaard was exposed to the ancient notion of ideas as constants in nature, where a concept like "repetition" would be considered a veritable glitch in the matrix, a sign from the deities, no less the ability to imagine it alongside the related fancies of eternity, love, fame and wealth.

To his Danish mind, Kierkegaard saw a dash of divinity in the thought of repetition and likened it to meditation, only with more Scandinavian authenticity. Siesbye manifests the meditative principle of repetition in her bowls, evoking the sublime apprehension of repetition as a touch from the muse, in other words, as a piece of art. Kierkegaard is considered one of the earliest existential philosophers for his embracing the sheer distinction of individuality as the foundation for a moral, free-thinking, rational and multiculturally tolerant society.

In search of the whole

There are quite many differences between the fields of art, technology and media, while they often merge indistinguishably, particularly the latter two. Art, as a separate sector, however, has the curious potential to hold the attention of a global society driven to the brink of overburdened industrialization with utterly naive works of material invention. The artist is specially equipped with the skills to retrieve undying, otherwise archaic techniques by which to stir solitary and collective consciousness with a bold, non-dualistic harmony.

"In principle, a work of art has always been reproducible," wrote Walter Benjamin, in the seminal art criticism essay, "The Work of Art in the Age of Mechanical Reproduction," in which, like Kierkegaard, the German-Jewish intellectual unpacks modern presumptions of signature uniqueness in art, retelling the dynamic history of art in relation to mass, cultural production. "Even the most perfect reproduction of a work of art is lacking in one element: its presence in time and space, its unique existence at the place where it happens to be."

Through color and shape alone, Siesbye has returned to the question, only with a voice light and sonorous, as a singer onstage in the middle of a piazza in Rome, recounting the fables of old with a theatrical step and a humorous tone. Her bowls resemble how early pottery changed little by little, adding a stripe at the lip, or divergence from standardized contours. As a microcosm of human remains over tens of thousands of years, the legacy of Siesbye is no less alluring. Looking at a Siesbye bowl in person, its textures can be felt by the seer's eyes.