On danger and extinction: The last rhino of Ali Cabbar 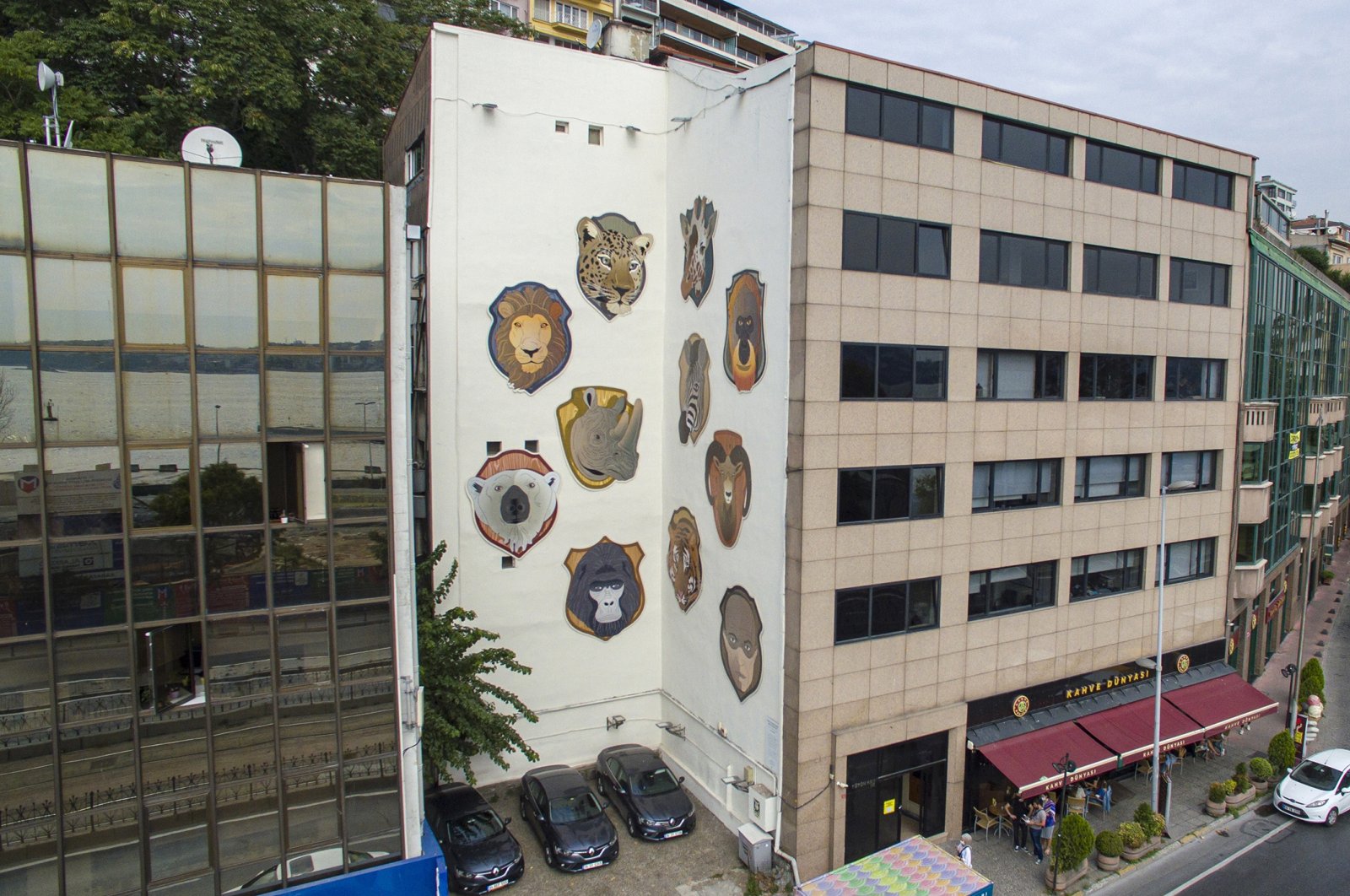 As part of their public art engagement, the coffeehouse chain Kahve Dünyası commissioned the illustrator, graphic designer and artist Ali Cabbar, who, in response, offered the heads of endangered animals

He sits, one leg over the other, by the window of a busy thoroughfare in Istanbul, and smiles over two hot cups of filter coffee. Ali Cabbar is pleased to present his work to the public of traffic jams and anxious passersby in Kabataş quarter. He has drawn, digitally, a series inspired by taxidermy, coloring and animating some of the world's most exotic, rarest mammals. His wholesome aesthetic is utterly basic, executing an approachability so familiar it is practically garish.

These formidable, poor creatures threatened with annihilation, whether due to the disintegration of their environments or hunting, look out, emotionless over a city that voids life in the name of human predominance, graced by pitiful, beloved strays, cats and dogs who are as benign as they are decorative. The plain, unrealistic eyes of his pixelated polar bear or mountain gorilla are so bluntly illustrative they are as mockingly ignorant as children's cartoons.

Cabbar, as characteristic to his oeuvre, appears himself, as the chief representative of homo sapiens, that species of primate which is not endangered, but as he jokes, dangerous. The idea behind the installation was, apparently, to align with global, ecological awareness to conserve such endangered species as Turkey's bezoar ibex, which, when it was observed for the first time in a century last year, had simultaneously fallen into the hands of poachers.

But although his newsworthy angle might have been otherwise valiant, the mural of Cabbar screams artifice, exposing his lack of direct experience with an issue that demands lived respect for countless earthly beings and the unfathomable importance and urgency of ecological integrity in the 21st century. Cabbar, a former newspaper designer, has not been to the remote landscapes where these powerful creatures are revered.

His interest began when wildfires raged in Australia, where he is also a citizen. He sees the island nation as a veritable second home as he lived there for the better part of a decade. From Istanbul, Cabbar is a seasoned artist who has mounted laudable shows on social themes, recently at Adas in the far-flung Seyrantepe neighborhood, in which he tackled genetically modified food products and the future of food through futuristic still-life works.

In search of lost

Cabbar is taking responsibility for the killing of the last male northern white rhinoceros. At a cafe endorsing his work, he is unafraid to come forward with the statement, "I Shot the Last Rhino," as the title of his installation for Yanköşe Project, the not-for-profit art platform sponsored by Kahve Dünyası. The didacticism of his mural is counterintuitively shocking to the point of being rude, in the literal sense of the word. Images of these precious, irreplaceable beings adorn a pale, commercial building, obscuring all meaning.

Fake-hued blue, brown, or grayish wooden backboards frame the unrealistic visages of the endangered mammals, rendered via Cabbar's virtual hand. Their display intends to impart, by a wayward glance along with the bustling, four-lane waterfront route, the fact that, there are mere thousands of each of these creatures left in existence, in some cases less than a hundred. According to Cabbar's research, less than 90 Amur leopards live in Russia and China.

At the very top of the wall, looming above the Kordofan giraffe and the African lion, the spectacular body of the Amur leopard is reduced to a computerized color scheme – the dots of its artificial construction visible across the spotted fur. Once the mythical dream of prehistoric shamans afar in the forests of southeastern Russia and northern China, the leopard is disembodied into the multimedia fancy of modern urbanization's naive privilege over nature.

In comparison to prior, visually abstract installations of theoretical, spatial design at Yanköşe, the environmental message of Cabbar is outlandish for the corporatized arts context in which it is exhibited and seen. Coffeehouses have become part of Western cultural commoditization, a bad habit endured by the African and Asian countries in which most of these endangered animals live.

Along with his Yanköşe installation, Cabbar is a proud creative, newly releasing a volume of his life of drawing, whether by hand or at home on his desktop. Issued by Mas Publishing, it is actually two books, "Typo," of texts, and "System Error," of images, edited by Başak Şenova, who also contributed writing of her own to its uniquely designed pages.

Throughout, Cabbar represents himself, the image of his body, as a constant model who is sketched, sculpted, photographed, masked, costumed, performing and everywhere. He plays with opposites, hashtags, and the language of graphic design and, of course, his profile.

The text he wrote for his own book is titled, "Sicilian Defence." Its lines are edited into the shape of chess pieces, specifically that of the pawn and horse. "The coronavirus confinement started right in the middle of preparations of this book, distracting everybody, including the writers of 'Typo' and myself," he opened his text. "It's been 40 years since I made these pieces, but they seem to be as solid as a rock, yet with the fragility of ceramic. I am so proud of them, and so happy to have rediscovered them in the cupboard thanks to the 'Corontine' boredom."

It was the American novelist Henry Miller who said that a man who is constantly concerned with the world's problems either has none of his own, or refuses to face them. Cabbar sought to make the critical endangerment of the world's biodiversity visually appealing. And even after drawing himself for a lifetime, creating what he might call autobiographical art, he has needed decades before speaking out about what was inside of him all along.