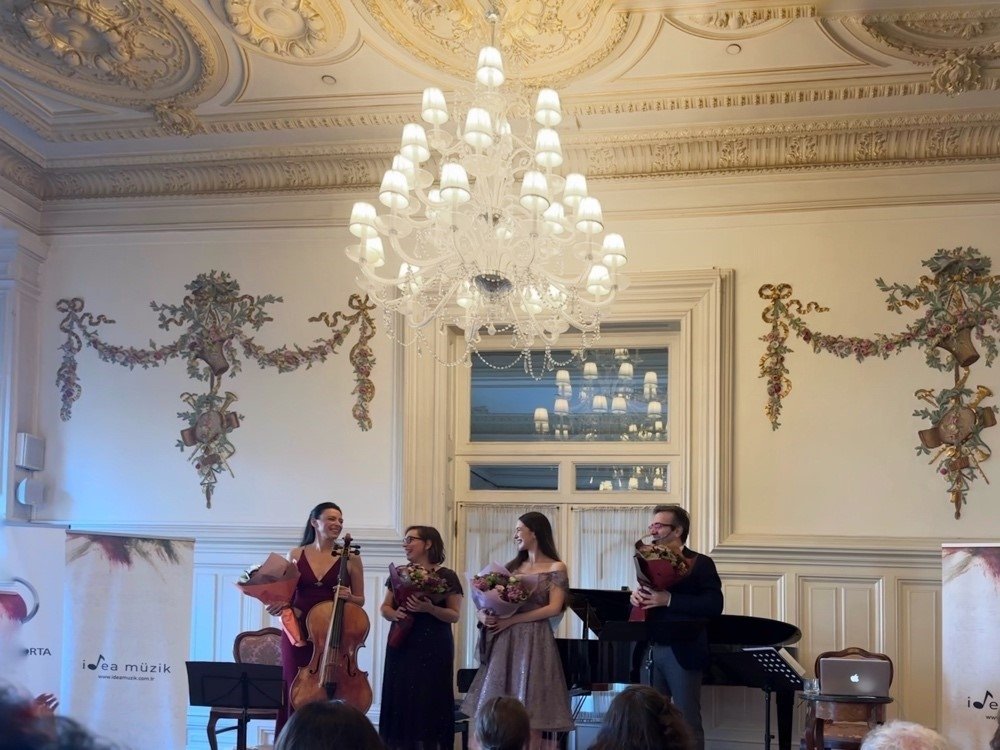 Having hosted many balls and concerts throughout its more than 120-year history, Istanbul's iconic Pera Palace commemorates French novelist Marcel Proust with a prestigious concert in a nod to his admiration for music

'The Whale': Heavy to watch, but astounding nonetheless

Close your eyes. It is July 1, 1907, and we are at the Ritz in Paris, one of the most famous hotels on Place Vendome, everything seems familiar: Art meets society in one room with high ceilings, magnificent decor and fabulous dishes, everything is just beautiful.

Marcel Proust himself puts together a program of works by French composers of past centuries and the early 20th century for his friends on this special musical evening.

Now, we open our eyes and find ourselves in the Pera Palace in Istanbul.

Back to our present day, Serhan Bali, editor-in-chief of Andante magazine and a baritone singer who studies music history extensively, had the idea of reviving Proust's historic concert at the Ritz Hotel 115 years later in the magical setting of the Pera Palace by holding a similar event with his musician friends.

Like the Ritz in Paris, the Pera Palace Hotel has hosted thousands of guests from many countries around the world since the first day it opened. Artists, writers, actors, directors, statespeople, prominent names... They all became a part of the legacy of the Pera Palace Hotel and the city of Istanbul, joining its history.

Proust, one of the greatest writers of the 20th century, is being honored with various events around the world in 2022, the centenary of his death. In addition to his unsurpassed literary talent, Proust is also known for his incurable passion for classical music, for his great interest in the composers and performers of his time and the master composers of the past, and for the musical themes he generously included in his seven-volume monumental work "In Search of Lost Time."

To this day, however, experts puzzle over what the violin sonata by the fictional composer Vinteuil in the novel is all about.

Reconstruction of Ritz evening in Pera

Having hosted unforgettable balls and concerts throughout its more than 120-year history, the Grand Pera Ballroom, one of the most special halls in Istanbul with its natural acoustics, opened its doors to the dazzling concert in honor of the 100th anniversary of the death of Proust as a part of Pera Palace's traditional "Saturday Morning Concerts."

In the concert, Bali told us about Proust's literary style, his passion for music and his relationships with composers and the Paris of his time, while cellist Dilbağ Tokay, mezzo-soprano Eylül Elif Arslan and pianist Emine Serdaroğlu present a varied program of chamber music, solo works and songs by Proust’s favorite composers, just as was done 115 years ago.

But was Proust’s love for music perhaps also an association with feelings?

In 1894, the 19-year-old singer and composer Reynaldo Hahn and the 23-year-old writer Marcel Proust met at Madeleine Lemaire’s legendary Paris salon, where the young composer performed his “Chansons Grises,” accompanying himself on the piano.

Hahn had already composed the songs at the age of 12. Proust and Hahn travel to the seaside in Normandy and Brittany. Despite their different preferences, their love of music was the foundation of their friendship from the very beginning. For the writer, music held the highest rank among the arts.

Proust and Hahn planned joint projects, including a biography of Frederic Chopin and an opera about Antoine Watteau's painting "Embarkation for Kythera." But the only project they realized was the "Portraits des peintres": a series of piano pieces based on poems Proust had written about four painters: Albert Cuyp, Paulus Potter, Anton van Dyck and Antoine Watteau.

In addition to Madame Lemaire's salon, which held the pulse of Parisian salons of the aristocracy at that time, it was the salon of Winnaretta Singer-Polignac that both Hahn and Proust frequented for a time. Winnie, as close friends were allowed to call the princess, cultivated an extraordinary musical range in her salon.

Not only did the patroness of the arts promote avant-garde composers such as Erik Satie and Igor Stravinsky, but also musicians such as Reynaldo Hahn, who was still composing romantic operas and song cycles at the turn of the century. She lovingly decorated the music hall in her palace near the Eiffel Tower for the premiere of his ballet "Le Bal de Beatrice d'Este." In keeping with the style of the work, she decorated the stage with Renaissance tapestries, softly lit by mild candlelight.

In his letters, Proust repeatedly took a lively interest in Hahn's work. The few letters that have survived from Hahn show great concern for his friend's health. It was Hahn who announced to the newspaper Le Figaro on Nov. 18, 1922 "that our dear Marcel Proust died this evening at half past five."

What delicacies can do

The concert is a remarkable way to honor Proust, with the program, the venue and also the macarons that let our tastebuds play along. This must have led many true Proust lovers back to the madeleine episode which was the beginning of it all.

When Proust dips a rusk (which becomes a madeleine in the novel) into his tea in January 1909, he is involuntarily transported back to his childhood. That moment a little depressed by the prospect of a gloomy morning, Proust "brings a spoonful of tea with a softened piece of madeleine to his lips. The second this sip of tea, mixed with the crumbs of biscuits, touched my palate, I winced and was transfixed by something unusual that happened inside me. An unheard of feeling of happiness..."

Suddenly the universe blossoms to his days of childhood. At that time, Proust always delivered his morning greetings to his aunt Leonie on Sunday and was offered a madeleine pastry dipped in lime blossom tea in return. With the delicate taste on his tongue, "all the flowers of our garden and those from Swann Park and the water lilies on the Vivonne and all the people from the village and their little houses and the church and all of Combray and its surroundings, all that now took shape and solidity, town and gardens, rose from my cup of tea."

Smell and taste lead directly to the brain stem, which is why they are considered the oldest and also most reliable senses. Their memory is less likely to be deceived than that of the eyes and ears. Proust demonstrates this. His ingenious trick is to remember not only the old times but also the child's optics, making the world bigger and wider. And all because of a delicate pastry.

In July, he withdraws from the world to write his novel, the first draft of which is completed in September 1912. The first volume "Swann's Way" ("Du cote de chez Swann") was rejected by publishers for various reasons and appeared at his own expense in November 1913. At that time, only three volumes were planned by Proust

During the war years, Proust revised the rest of his work, deepening its sensations, structure and interpretation, developing real and satirical elements, and tripling its length. In this way, he transformed it into one of the most profound achievements of the human imagination. In June 1919, "In the Shadow of Young Girls' Blossoms" ("A l'ombre des Jeunes filles en fleurs") was published at the same time as the new edition of Swann. After the novel won the Prix Goncourt, Proust was made famous at a stroke. Two more volumes were published during his lifetime and benefited from his final revision: "The World of Guermantes" and "Sodom and Gomorrah."

The last three parts of his masterpiece "In Search of Lost Time" appeared posthumously in an advanced but not yet finished adaptation: "The Prisoner," "The Escaped" and "Time Recovered."

Yet Proust's work was about nothing less than the abolition of time and ultimately of death. Insights like this, from "Time Rediscovered," the last part of his masterpiece, he delves into "A minute lifted out of the order of time has created in us so that he can experience it, man freed from the order of time."

This alludes to the narrator's sudden perceptions that belong to both the past and the present, unveiling his involuntary memory activity. These include the taste of the famous madeleine, but also, precisely, the sound of a spoon hitting a plate, the scent of the hawthorn hedge, or the uneven paving stones in Venice and the Guermantes' courtyard.

"And this man – how well can one understand that he has confidence in his pleasure, even if the taste of a madeleine does not logically seem to contain the reasons for that pleasure, also understand that the word death has no meaning for him; what could he, removed from time, fear from the future?" he said.

And today, on the 100th anniversary of his death, we commemorate his love of classical music with this wonderful concert and hope that he will finally rest in peace.

'The Whale': Heavy to watch, but astounding nonetheless