Send me a postcard: The jests of Ipek Duben 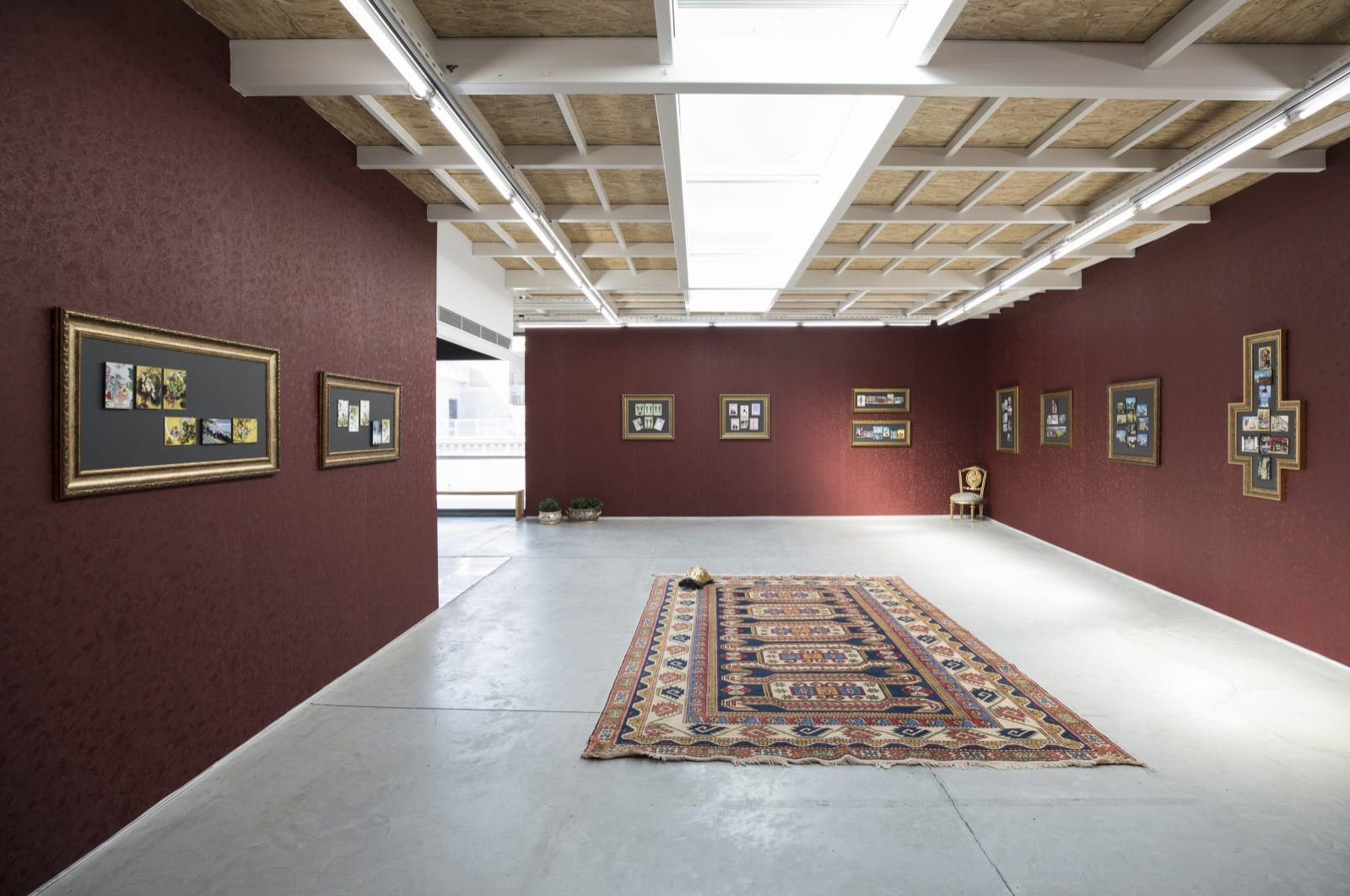 'Angels and Clowns' is the latest exhibition by Ipek Duben, a seasoned Turkish artist whose personal history and life’s work will mingle with prepared postcards from Istanbul and New York at Pi Artworks until Sept. 19

She matches. A blue-haired 79-year-old sporting a neckline adorned with a chain mesh resembling repurposed plastic clips, Ipek Duben sits atop the Juma building in Karaköy behind glass windows, comfortably adorned in a fuzzy, azure sweater. Hers is the art of a storied satirist, whimsical at heart and on the surface, but rough around the edges when bristled. Her visual venom is transmuted into the spatial forms of her plural artwork.

Far from self-conscious, yet entirely aware of her surroundings, she exercises her natural power to choose, as a woman, an artist and a human being, how to blend and how to stand out, not only through the colors of her clothing but also relative to her surroundings, both sociopolitical and natural-material. She does so by the recognition and creation of distance from reality through fantasy, situating creative perspective apart from imaginary beings like angels and clowns.

A video plays on loop upon entering Pi Artworks, the top-floor art gallery at Juma, its austere, concrete space flooded with sunlight amid Istanbul’s prime core real estate. Duben puckers up in front of a mirror as she smears on lipstick to accent her whitened, wigged face. She has no problem assuming the guise of a clown since it suits her light-hearted temperament, but when her latest works appear, her visionary sense of conceptual-aesthetic contrast comes into focus.

Under a sleek voiceover, her earnest voice rings out loud and clear to declaim the rise of disaster capitalism as a twin-headed mythological monster whose quartet of eyes inflames media veils of ignorance that obscure the direct experience of contemporary life and its tragedies. Her subjects are hurricanes, floods, the arctic ice melting, rising temperatures and sea levels, tsunamis, forest fires, volcanic explosions, aridity, famine, rising inequality and mass migrations.

Installation of her ideas

When the artist recites the litany of newsworthy causes, they somehow sound fresh through her careful, poised articulation that has been screened and installed with curatorial tact across the gallery floor and along the otherwise crude walls of Pi Artworks. With the confidence of her education as a political science student at the University of Chicago in the mid-1960s, she has the experiential pull of a mind that has pulled at the roots of the global status quo.

And, utilizing the mediums of the postcard and the photograph, lightly embellishing them with wispy decorations of paint, she is ushering in a reevaluation of the prevailing world order by transforming one of the modern West’s oldest traditions of expression and connection. Postcards are prototypical social media in that they picture and date individual and collective presence for the purposes of broadcast, often for personal and recreational devices.

The invisible minority of oligarchs sits enthroned beside the rest, restless and restive under the behemoth nodes of oppression that keep people confined while forcing them out. The fortress Europe has made itself into a postmodern promised land, enclosed with a barbed cage against which the darker and poorer strains of humanity cling and fall. Such scenes are in her work, “Moon 2” (2020), in which she juxtaposes illegal migration with the moon landing.

“Moon 1” (2020) is similarly coursed with visual insight into the quixotic gravity of earthling aspiration, which is never-ending in its approach to the heights. At one end, all 7.6 billion of the world's population would have a life equal to that of their former Anglo-European masters, and on the other, worldly success is insufficient in a universe where undiscovered planets await colonization. Crouched on the crescent moon, witnessing Neil Armstrong’s small step, Duben clowns around.

In 1976, Duben had switched from a career in politics in America to the world of art. That year, she earned a BFA in studio practice at the New York Studio School and planted roots in Soho, “when it was still Soho,” she says with a wry, knowing grin. In 1994, with the rise Turkey’s ruling party in Istanbul, she had a solo show in a storefront gallery in Taksim. She was one of the last local artists to expose herself so completely bare in a public cultural forum.

That early work appears in her piece, “Monument” (2020), a paean to the high arts of antiquity, particularly sculptural celebrations of the human body. She profiled herself from raised arms to straightened legs like an Egyptian goddess below an architectural frame out of a Pharaonic temple. In the same collage, she portrays the unspeakable vandalization of ancient masterpieces of marble, in honor of glorious femininity in its shapely wonder.

Preceded by well-earned international prestige, however modest a colorful personality she assumes, Duben is a careful, self-curating installation artist. “Angels and Clowns” is set within a baroque design of deep crimson wallpaper, textured with floral patterns like in a Victorian mansion. Two decorative, elegantly armed and gilded chairs are fixed in the corners of the gallery, as if out of the 18th century.

And draped over the floor, a Turkish rug is topped with an antique model turtle, something perhaps alluding to the masked balls of the old Ottoman palace, wherein moving candles lit the salons and ballrooms attached to the shells of living turtles, who it can be presumed must have walked into not a few blazing crinolined petticoats. The surroundings are from a time as baroque in its profusion as the cities of her portraiture: New York and Istanbul.

The seraphim of Hagia Sophia disrobe of their feathered shrouds, morph into cherubim and descend from the celestial ceiling of the mosque-cathedral-museum to light the city. First, one of the winged angelic infants touches the tip of the Maiden’s Tower. It is part of Duben’s piece, “Istanbul 1” (2020). Throughout the watery vistas of the vast metropolitan area, the heavenly cherubs fly, enlightening like the mahya art of stringed bulbs of words tied to minarets.

In her work “Istanbul 2” (2020), she quotes Orhan Veli, who wrote one of the most popular poems about Istanbul, “Istanbul'u Dinliyorum” ("I am Listening to Istanbul"). And pasting out the legendary phrasing, word by word, from found fonts and other clippings, the notorious crowds of Istiklal Avenue march, shop-happy, within the interstices between an excerpt of the poem: “I am listening to Istanbul, intent, my eyes closed / At first there is a gentle breeze ... ”

Perhaps the most urgent, historical and difficult of Duben’s works appears in her piece “Model 2” (2020). It is the second part of a series on the female body. One of the postcard-shaped additions is a newsflash. A young girl suffered mortal punishment of her family in the name of honor. The subject is an issue Duben tackled with her works, “LoveBook” and “LoveGame” (1998-2000).

With critical pieces in some of the highest-profile art collections in the world, including at the British Museum, the Bibliotheca Alexandrina, Istanbul Modern, the Vienna Museum and the Center for Book Arts in New York, Duben is a formidable presence in Istanbul for now and always. Her art, and her persona, however, are approachable, and even exciting, evoking the sensation of getting that postcard in the mail from far away only to learn the world has shrunk.