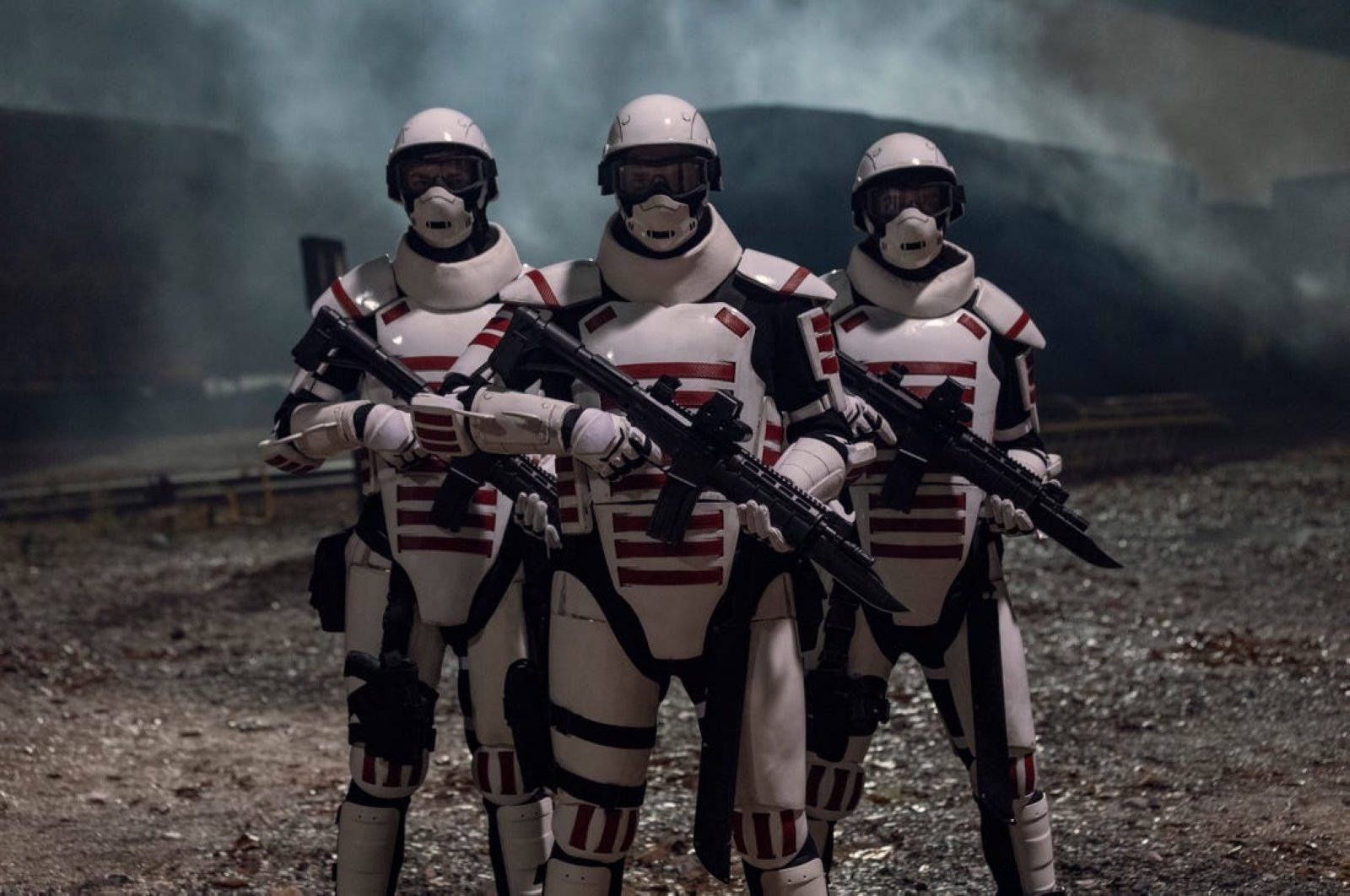 The Commonwealth soldiers arrive the meeting of Eugene Porter with a survivor in "The Walking Dead" season finale.
by ALİ TÜFEKÇİ Oct 06, 2020 12:10 pm

While the season finale of 'The Walking Dead' packed a whole array of big moments from Maggie's return to the end of 'The Whisperers,' it also hinted that the next season will present a story on a larger territory

The coronavirus pandemic had completely halted the TV series and cinema industry; however, mobility has gradually resumed as economies adapted to a new normal. The renowned series “The Walking Dead” was also impacted by the COVID-19 outbreak. Due to the pandemic, the producers could not complete the filming of the season finale and had to postpone the release date until October.

Many series have predicted the emergence of a pandemic or epidemic, including "The Walking Dead." In the fourth season of the series, the heroes contract an illness transmitted by a droplet and display many symptoms similar to those being experienced by coronavirus patients. Although they try to contain the illness by quarantining, patients at an advanced stage of the illness have to be intubated. Does this situation sound familiar to you?

Causing a sensation with these episodes, the series released the season finale on Oct. 4. Also, the spin-off "The Walking Dead: World Beyond", telling the story of the first generation growing up during the zombie apocalypse, premiered on the same day.

Warning: The following contains spoilers about "The Walking Dead" finale.

Samantha Morton's character Alpha breathed new life into the series in the ninth season, and the audience was glued to the screen once again. Morton is the leader of The Whisperers, a group of hostile survivors operating like a wolf pack, while the character Beta is played by Ryan Hurst and is the second-in-command, serving as Alpha's right-hand man with all his loyalty.

Actually, the main antagonist of “The Walking Dead” universe is Negan, portrayed by Jeffrey Dean Morgan. Negan's wicked ways are not based on brutality, as he saw himself as a savior, which is why he named his group "The Saviors." Negan, however, did not fire the first bullet. The main protagonist Rick Grimes and his friends harm Negan's men first. Surely, this does not justify the villain's tyranny. He considered exploitation, injustice and cruelty necessary for the system he had established. This stemmed from the belief that human beings are inherently bad. The zombification of the world was an indication of this.

Rick and other communities unite to end Negan's order in the season finale. They lay the foundations of a civilization based on justice and compassion. By imprisoning Negan, they convince him that human beings are inherently good. During the years he spends in prison, his thoughts begin to change for the better. He wants to prove that he is on the side of the good guys by making up for his actions. He would do this the way he knew best.

He pretends to be a runaway traitor and infiltrates The Whisperers. He kills Alpha, bringing the group to the brink of disintegration. With the unexpected death of Alpha, Beta's mental health begins to deteriorate rapidly. Beta starts believing that Alpha isn't dead, and he also starts conversing with imaginary zombies. In the season finale, entire communities in the series’ universe are surrounded by tens of thousands of The Whisperers' zombies.

At the same time, Daryl Dixon, played by Norman Reedus, and Carol Peletier, portrayed by Melissa McBride, plan to infiltrate the zombies by blending in and lure the horde away. Then they would draw the zombies to an abyss in the canyon with loud music, like the pied piper of Hamelin. The Whisperers are then revealed when they stay behind and refuse to follow the zombies into the abyss.

As they apply this strategy to get rid of the pack, we see Lauren Cohen’s main character Maggie, who left in the ninth season, back in the finale.

Rick and Maggie had been thrown into unknown parts of the TV series’ universe. Rick was lost in the river while sacrificing himself to exterminate a horde of zombies; thanks to Jadis, played by Pollyanna McIntosh, he was helicoptered by a powerful crowd.

Maggie, too, takes her son and goes away, forgetting what had happened. No one hears from her for years. However, a few letters describing the situation are placed in an agreed-upon place. We see Maggie reading those letters in the trailer of the season but we do not know where she is in the universe of “The Walking Dead” or who she meets.

Maggie returns with a masked hero, who is a mystery for now, next to her. It seems like this mysterious warrior will replace the master battle choreography of Michonne, who left the community to find Rick.

Maggie is back, but another name that has been missing since the ninth season is Rick. One of the most anticipated things during the next season was to see Rick, even if just in a single shot, but that didn't happen. We know he will appear in the 11th season.

Michonne, who went to fetch ammunition to fight against The Whisperers, could not find a weapon but learns that Rick is alive. Michonne goes after him when Judith says that her father needs help. At the end of her long journey, we see her join a very crowded community. She will search for and find Rick here.

As we know it from the comic universe, this crowded community is the "Commonwealth." There will be a struggle against the new characters that are included in the series with this community. Thus, season 11 opens its doors to a much larger community. Here, we will be able to see more clearly the situation of the zombie disease in the country and around the world.

Thus, instead of small town-like communities, we will see a large and organized city-scale structure. This situation will enlarge “The Walking Dead” universe by a few more levels.

The form of a symbol on the helicopter that saved Rick and the community Michonne joins implied that the Commonwealth will arrive in the 11th season. However, the ending of Eugene Porter's journey is also another important point.

If we remember, Eugene was going to meet a person he found thanks to the high radio frequency, which he made from falling satellite parts. We saw them trying to catch up to the meeting. When they reached the meeting place, the person they were looking for was not there. But all of a sudden, the Commonwealth soldiers arrived with their armor reminiscent of Star Wars' Imperial Army.

Will we see a story entirely span across the Commonwealth, or will there be struggles with other large communities? Will they get rid of the zombies completely and watch the steps of the foundation of a new civilization? All of these questions will be answered in the 11th season, which will be released in 2021.