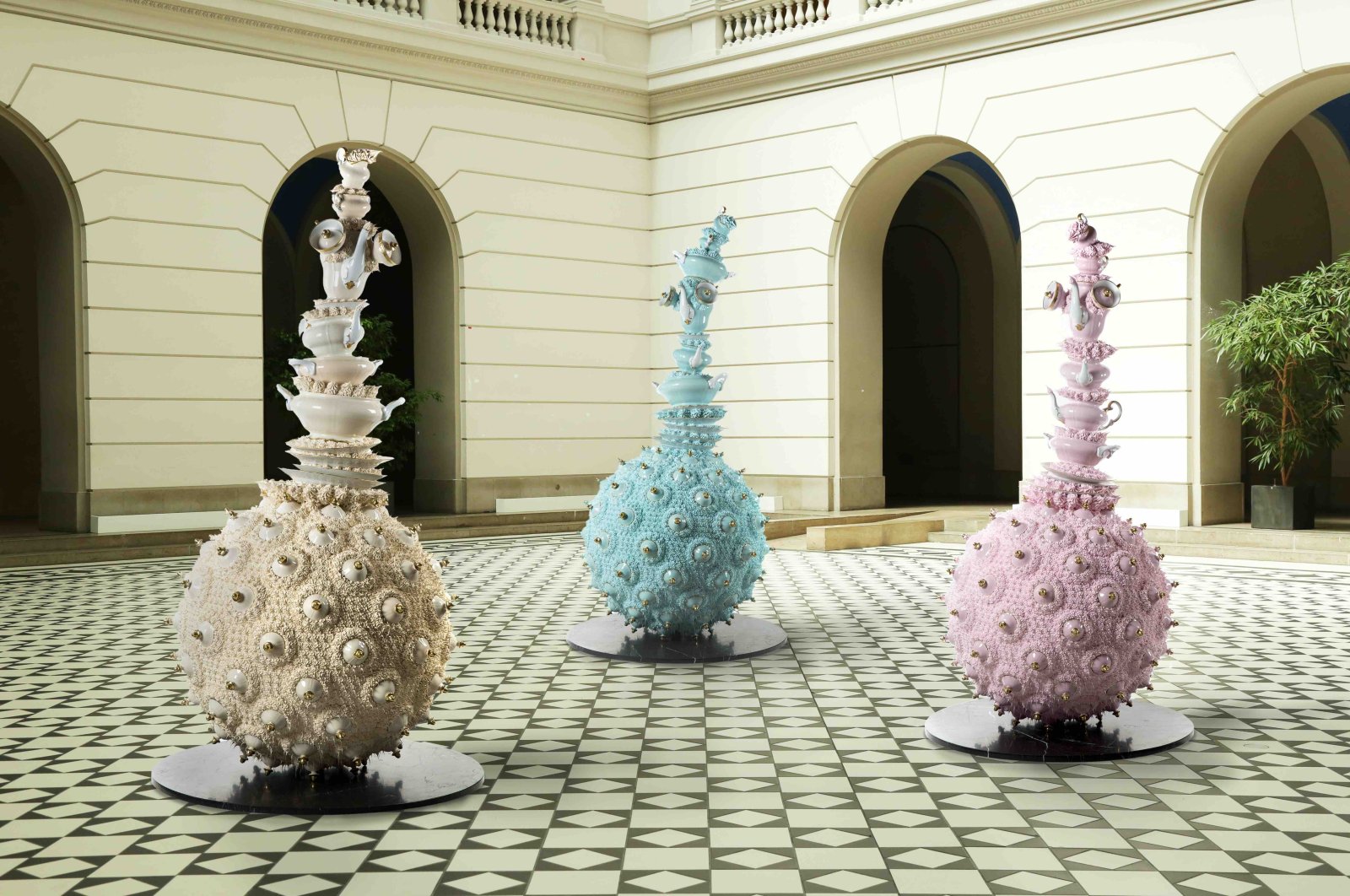 Emerging from the Renaissance discipline, baroque sculpture is characterized by extravagant details like strong curves, elaborate decorations, which create a rich dynamism with multiple viewing angles for artworks. In later periods, the mannerism style, marked by a stylized, exaggerated approach to painting and sculpture, triggered baroque artists to give their pieces – which are designed to be placed in the middle of large spaces – a unique appearance with strong contrasts.

This style is evident in the sculptures of Berlin-based artist Anke Eilergerhard. Her mesmerizing works create conventional contrasts between forms and colors. While she builds her sculptures to reflect some metamorphoses of different meanings, she uses dynamic clouds of color. The artist confidently plays with the nuances of the sparkling colors of her material. Color and form merge indissolubly, delimiting each other.

Eilergerhard is celebrated by critics worldwide for her unique, often humorous artistic stance. She creates beguilingly hypnotic sculptures that stimulate not only sight but also senses of touch, taste and smell. Her first solo exhibition in Turkey, “Resilience,” showcases more than 30 of her new and recent productions including sculptures, wall reliefs and screen printings at the prominent Anna Laudel Gallery starting from Sept. 24.

Named after the resilience of the materials (a special silicone material called "pigmented polyorganosiloxan") and porcelain she uses for her sculptures, the exhibition shows Eilergerhard’s figures combine the power of meaning with elasticity despite fragileness. The artist presents familiar objects in a way that has never been seen before. Shaping the silicone layers like dough, she stacks kitchen objects in a mysterious symmetry defying gravity. The objects, used out of their usual context, both create aesthetics and connotations by rejecting their association with women all over the world using the careful technique of the artist.

The stunning sculptures evoke abundance and plentifulness at the same time. While Eilergerhard deals with tradition in a daring and ironic way, the lavish abundance of the baroque style takes over the works. The artist creates flamboyant, lace and ruffle-shaped silicone folds in her works as her authentic baroque applications serve as mirrors and add a theatrical atmosphere to her sculptures. Besides, the aforementioned contrasts of mannerism do not only show up in forms and colors. Everything is chaos and order in the artist’s sculptures. For example, one can clearly see the order of bright colors and opaque monochrome at first glance.

With an enthusiasm ignoring boundaries, with ingenuity, wit, and conceptualism, Eilergerhard's figures and objects explore surface and space, rule and chance. In her sculptural work, there are always moments of absurd encounters between the unexpected, the trivial and the precious. At the same time, silicone caps placed on top of each other in a series and their repeated processes, differences and repetition create a new order of representation and overturn traditional common sense.

Eilergerhard participated at numerous international exhibitions and art fairs, and her works have been presented in collections and public spaces around the world including United Arab Emirates (UAE), Austria, Chile, Canada, France, Germany, Hong Kong, Italy, the Netherlands, Liechtenstein, South Africa, Switzerland, the United Kingdom and the United States. As part of her collaboration with the international fashion house FENDI, some daring works of the artist, who recently received the Tempelhof-Schönberger-Berlin Art Prize, were also on display at 11 FENDI flagship stores in cities such as New York, Paris, Milano, Berlin, Dubai, Hong Kong, Tokyo, Rome and Shanghai.

Her sculptures, which seem to jump and bounce by conveying greater elasticity of action based on space and time, can be seen at Anna Laudel until Dec. 27.