The Louvre preserves its treasures as climate change floods Paris 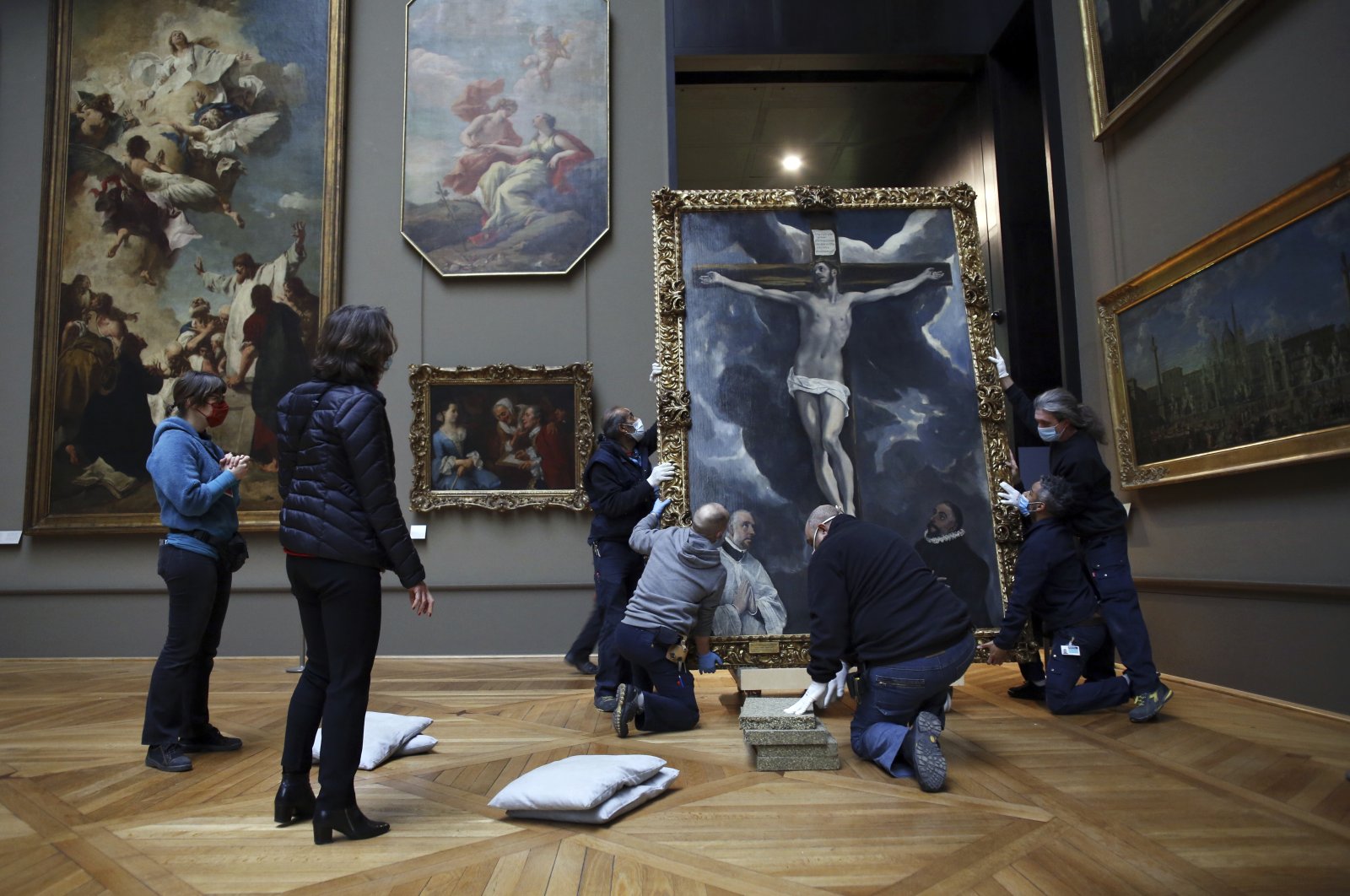 Workers handle a painting called 'Christ on the Cross Adored by Two Donors' by Spanish painter El Greco, as it returns from an exhibition at the Chicago Institute, in the Louvre museum, in Paris, Feb. 9, 2021. (AP Photo)
by Thomson Reuters Foundation
Feb 28, 2021 11:09 pm

The iconic River Seine which runs through Paris, overflowed earlier this month, as the impacts of man-made climate change were observed once again. Meanwhile, the officials at the famous Louvre Museum were relieved that some of their most valuable pieces were safely stored in northern France.

The world's largest and most visited museum, with almost 10 million visitors annually, had already transported some 100,000 at-risk art pieces to the new Louvre Conservation Center in Lievin, some 190 kilometers (118 miles) north when authorities feared this exact situation.

"The current floods show once again how necessary it is to protect our artworks from flooding," said Jean-Luc Martinez, Director of the Louvre, which owns about 620,000 artworks, only 35,000 of which are on display in the Parisian former palace.

"Soon this flood danger will, once and for all, be behind us," he told the Thomson Reuters Foundation.

With climate change, scientists say heavy rains that cause flooding are set to become more frequent, threatening riverside gems like the Louvre, Notre Dame cathedral and the Musee d'Orsay, which is home to the world's greatest impressionist paintings.

"We have a lot of museums whose collections will be affected if they are not stored properly," said Mechtild Rossler, director of the UNESCO World Heritage Centre, which supports landmark buildings recognized by the U.N. cultural agency.

By mid-2021, Louvre officials hope 250,000 at-risk paintings, sculptures and tapestries, including the historical Venus de Milo, will be in their new, $120-million home, where they will be safe from floods, heatwaves and other extreme weather conditions.

The 18,500 square-meter (nearly 20,000 square-feet) glass and steel building was designed to blend into the local environment, with a grass-covered roof where wildflowers grow in the spring, which helps with rainwater management to prevent flash flooding.

The Louvre Conservation Center is set to become one of Europe's largest art training and research centers, visited by museum specialists, conservators and academics from around the world, as well as offering refuge for countries in conflict.

"This request must come from the states themselves, in full compliance with international law, and provided the works be returned safely when the conflict is resolved," the Louvre said on its website.

The conservation center, which opened in October 2019, will gather together in one place works previously stored in about 60 locations, almost two decades after the Paris Police Prefecture first warned that the Louvre was at risk.

The River Seine meanwhile has always been prone to flooding. During the Great Flood of 1910, the river rose by 8.6 meters (28 feet). Roads were submerged for two months, the metro flooded, and thousands were evacuated, with damage estimated by Louvre officials at $1.9 billion in today's currency.

While the 2016 flood did not damage any art, it did force the Louvre to quickly shut and move 35,000 works from its basement storerooms to higher grounds in 48 hours, costing the museum approximately $1.8 million in lost revenue.

"The teams at the Louvre were in panic mode," said Hamish Crockett, project architect of the center. "It was a reminder that the need (for the center) was very real."

The facility is not only double water-proofed with a leak detection system, but it is also built on well-draining chalk and sandy soil where the flood risk is low to non-existent, even taking into account higher future rainfall projections.

The new center also allows for regulation of temperature and humidity to protect art from the extreme heat that can degrade wood and increase the risk of mold and insect infestations.

"We imagined the worst case climate scenario and then designed a building that was safe for that," said Crockett.

Other major museums are also taking notes from the Louvre. The British Museum is building storage space for archived artifacts in Shinfield, some 64 kilometers (40 miles) west of London.

In the Netherlands, some 600,000 objects from four national collections, including the Rijksmuseum, will be housed in a center in Amersfoort, 50 kilometers (50 miles) southeast of Amsterdam.

"We are seeing heritage sites disappear due to climate change," Crockett said, and added, "This is the new reality."