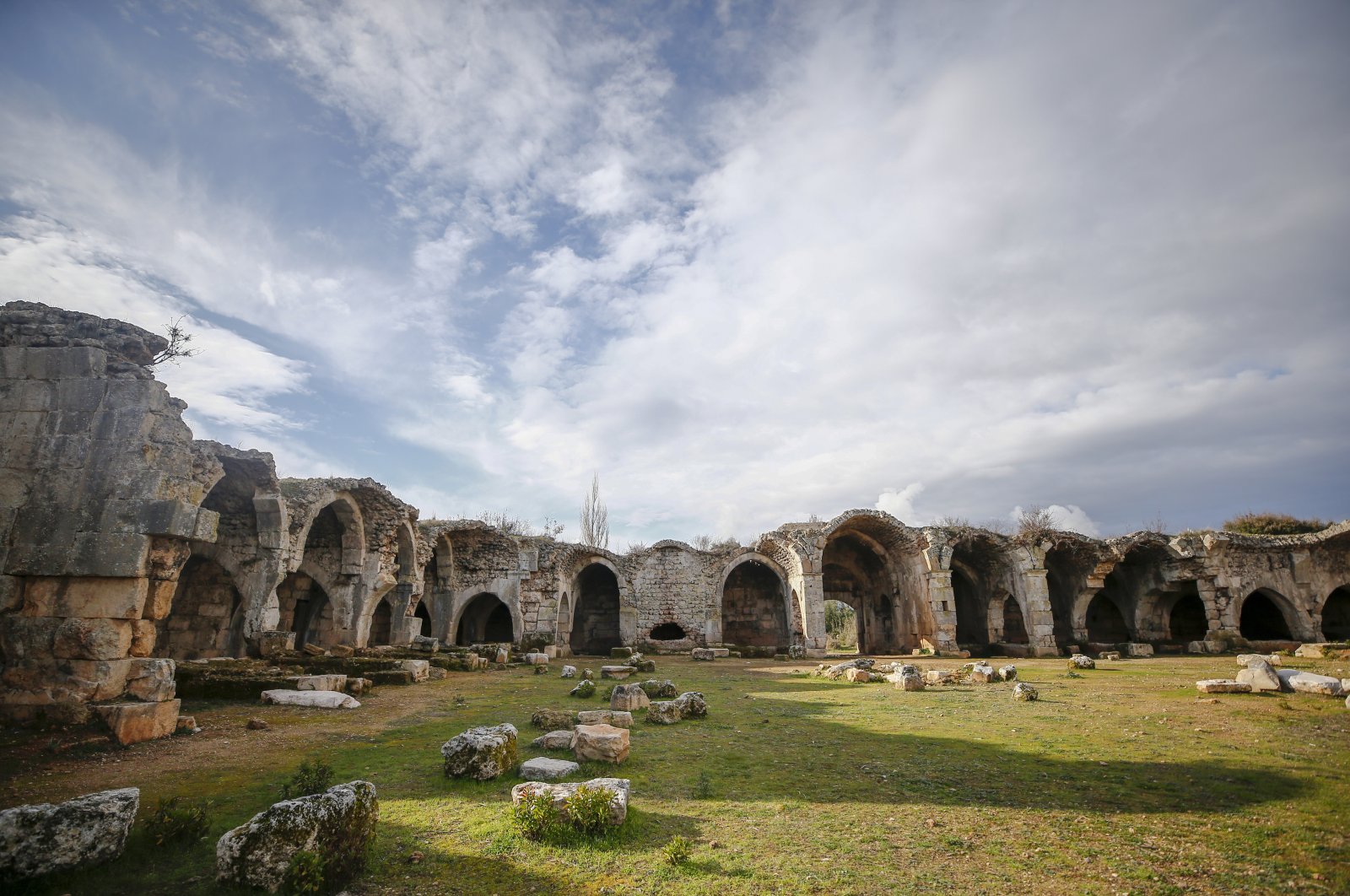 Evdirhan Inn has a layout different than other inns of that period. (AA photo)
by Anadolu Agency Mar 18, 2020 12:13 pm
RECOMMENDED

The Mediterranean resort city of Antalya, known as the capital of tourism in terms of its tourist numbers, also attracts visitors with its historical inns located in various districts.

Hosting the greatest number of hotels and 42% of the 1.2 million beds certified by the ministry across the country, the city attracts tourists from 193 countries. While Antalya is one of the most important tourism destinations in the world with its beaches, bays, quality of service in its hotels, historical and cultural values, its inns are also a center of attraction.

The inns, most of which were built during the Seljuk period and are located in the key centers of social and commercial life. They feature shops in their courtyards and rooms where people can relax, all bearing the traces of their extensive history. Some of the inns have been restored and continue to serve people.

In an interview with Anadolu Agency (AA), Antalya Gov. Münir Karaloğlu said Antalya's tourism sector continues to grow. Indicating that every year they break the record of the previous year in tourism and that this is no coincidence, Karaloğlu noted that cities carry traces from the past, and these traces determine the future. Likening cities to people, Karaloğlu stated: “Just as humans carry the genetics of their ancestors, cities have some features in their DNA and even if you incinerate them, one day it will come back.”

Here are some inns contributing to the cultural tourism of Antalya.

Alarahan Inn, located in the Çakallar neighborhood of the Alanya district, is a structure built in the Seljuks period. The inn, which has a six-line inscription on its crown gate, has an important place among Anatolian Seljuk caravanserais. Apart from the eastern facade covered with rubble stone, the other three facades, which were built with smooth cut stone, were restored in 1998 and rented for 49 years under the "restore-operate-transfer" model, but the inn was vacated last year.

Serapsu Inn in the Konaklı district of Alanya was built during the second period of Kaykhusraw II. There is a five-line construction inscription inscribed on a white marble slab on the crown gate of the inn, which was located at its first destination on the road extending south of Anatolia during the Seljuk period. Restored in 1992 and leased for 10 years, the inn is now operated by a company.

It is stated that Kargıhan inn in the Beydiğin neighborhood in the Manavgat district dates back to the 13th century. Known as a caravanserai, there is a bathhouse in the southeast of the inn. The inn is under restoration currently.

Evdirhan Inn, located in the district of Döşemealtı and built on the ruins of the ancient city of Lageon during the Anatolian Seljuk period, has a different plan scheme among the inns of that period. The inscription of the inn says that it was built by Sultan Kaykaus. Restoration work at the inn is expected to start soon.

Kırkgözhan Inn, located in the Döşemealtı Bıyıklı neighborhood, is the second stop after Evdir on the Antalya-Konya caravan road. Built from 1236 to 1237, the inn was leased for 29 years in 2005 under a "restore-operate-transfer" model. The inn serves cultural tourism as a venue where historical films and series are shot.