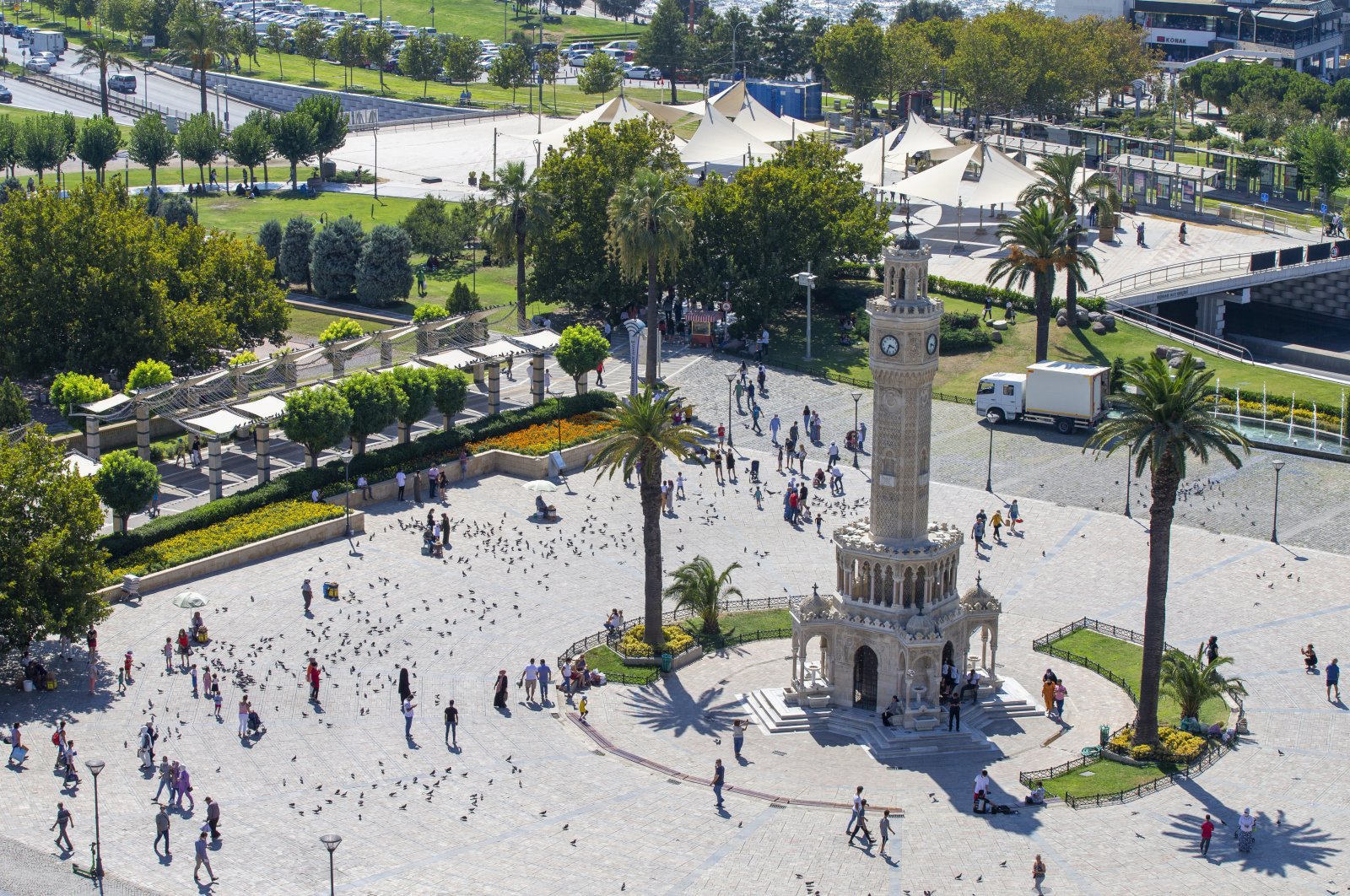 The clock tower in the western city of Izmir was built to mark the 25th anniversary of the enthronement of Ottoman Sultan Abdülhamid II, Izmir province, Turkey, Aug. 24, 2020. (AA Photo)
by Anadolu Agency Aug 25, 2020 11:44 am
Edited By Irem Yaşar

Beautiful clock towers are among the historical and cultural treasures of Turkey, bearing witness to the passage of time in their cities

Turkey's geography, home to rich nature and flora, is full of unique historical and cultural riches as well. Clock towers are among the rarer examples of this rich heritage.

Clocks, which led to a revolution in the perception of time, were first placed at high heights and sized so everyone could easily see them in city squares before becoming more compact to fit in houses and pockets and on wrists.

Fascinating their beholders, clock towers in many cities around the country have born witness to centuries as the most remarkable architectural artifacts of their home cities.

Here are some of the clock towers that have become icons in various cities in Turkey.

In the southern resort city of Antalya, known as the tourism capital of the country, the clock tower in the Kalekapısı area, which serves as the entrance gate to the historical Kaleiçi quarter, is one of the most important structures that make up the city's skyline.

The pentagonal bastion, built in the Eastern Roman (Byzantine) period in the ninth century, was turned into a clock tower with the addition of new, historical, square stones at the beginning of the 20th century, as a result of the importance that Sultan Abdülhamid II attached to city clock towers. The actual clock in the tower was gifted in 1901 by German Emperor Wilhelm II, who also sent such timely presents to many cities in Anatolia. The tower, which was in the shape of a dome before it was destroyed in a storm in 1942, was repaired in a square structure.

The clock tower in the western province of Izmir was built to mark the 25th anniversary of the enthronement of Ottoman Sultan Abdülhamid II. Like the clock tower in Antalya, its clock was ,too, gifted by Wilhelm II. Built by the commission consisting of then-Izmir governor, Turkish Cypriot Kamil Pasha, his son Marine Brig. Gen. Said Pasha and then-Mayor Eşref Pasha, the 25-meter-high (82-foot-high) tower with four floors and an octagonal plan adorns Konak Square.

On the 25th anniversary of Sultan Abdülhamid II's accession to the throne in 1901-1902, a clock tower was built on the order of writer and administrator Ziya Pasha in central Niğde province. For the tower, half of the bastion on the southwest corner of the inner castle on the Alaeddin Hill was demolished and filled. The base and body of the clock tower, which looks like a minaret, were built according to a decagonal design.

The clock tower on Behzat Boulevard in northern Tokat province was built on the 25th anniversary of Abdülhamid II's accession to the throne by Gov. Bekir Pasha and the mayor's son, Enver Bey, with the help of the people. The clock tower, 33 meters (108 feet) high, is made of cut stone and can be seen from all parts of the city.

In Erzurum, a clock tower considered to be one of the oldest works of the Islamic period in the eastern province was built as a minaret for the inner castle mosque by Saltukid ruler Emir Saltuk Bey in the middle of the 12th century. The structure rises adjacent to the fortification wall in the southeast corner of the inner castle. Its base is made of cut stones, and its body was built of bricks in a cylindrical form.

The 11.5-meter-high (38-foot-high) structure, which was made of fired bricks, started to serve as a clock tower and a watchtower when a clock was installed on it in 1881. The tower has an inscription in Kufic script, a style of Arabic script preferred for Quran transcription and architectural decoration. It is noteworthy that the wooden part on which the clock is placed and the upper architecture are Western in style.

The clock tower in central Kayseri province’s Cumhuriyet Square was built in 1906 per the order of Sultan Abdülhamid II. Built by Salih Usta of the Tavlusun district, the clock tower was built of cut stone according to a square plan, though its interior is cylindrical. The 10-meter-high (33-foot-high) tower's clock mechanism was imported from the German city of Leipzig. The structure also features a weather vane made of zinc on the roof.

The clock tower in central Yozgat province, built by Şakir Usta in 1908 under the mayorship of Tevfikzade Ahmet Bey, is located in the city's center. The imposing, century-old clock tower consists of seven floors and has bells. Built with cut stones, the tower has four clocks placed on each facade of the top floor.

The Macedonian Tower in northwestern Edirne province is one of the towers at the four corners of the city walls surrounding Hadrianopolis (the historical name of the city), which was founded by the Roman king, Hadrian. It is the only surviving example from that period in the city.

The tower became known as the Macedonian Clock Tower after Hacı Izzet Pasha, one of the governors of Edirne, built and placed wooden floors and clocks in the tower in 1866-1867. It was severely damaged in an earthquake in 1953. After its restoration, the tower will be opened to visitors as a museum and historical site.

Another clock tower built in northwestern Bilecik province by Ertuğrul Gov. Musa Kazım Bey in 1907 is 15 meters (49 feet) high. The tower is located near a high school that is now used as the municipal service building, on Istasyon Street.