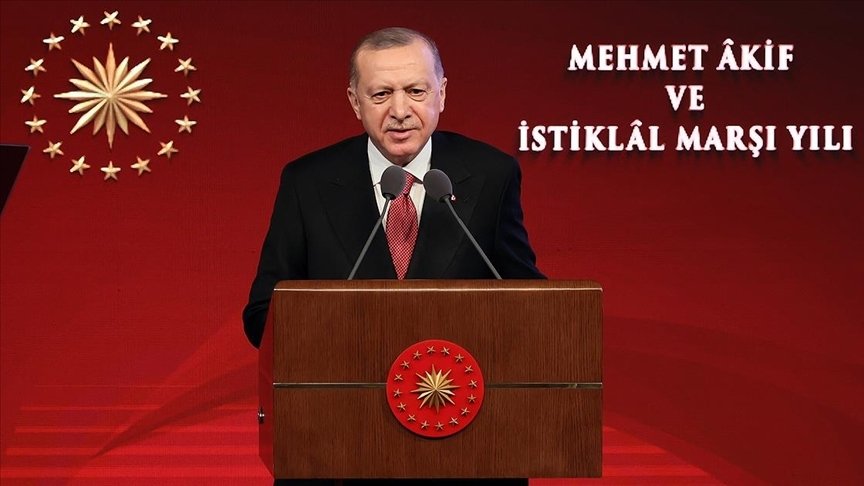 As Turkey marked the centennial anniversary of the national anthem, one of the symbols of Turkey's independence, on Thursday, a memorial event was held at the Beştepe National Congress and Culture Center in the capital Ankara. Speaking at the event, President Recep Tayyip Erdoğan said the national anthem is valued by all Turkish people and has inspired all oppressed people in their struggle for freedom.

Saying that 2021 has been declared the Year of the National Anthem on the occasion of its 100th anniversary, Erdoğan said this declaration was adopted after a joint proposal from all five political parties in the Turkish Parliament. "It is a great achievement for our country that political parties with different views, political attitudes and stances take a common stance on such a national issue," he said.

He stressed that the country's national anthem is the "common value and common ground of 84 million with its Turks, Kurds, Circassians, Arabs, Alevis, Sunnis and Laz" peoples.

Describing the national anthem as a "foundation" for the country's togetherness and fellowship, Erdoğan said: "It is quite natural that there is conflict, discussion and competition both in politics and in daily life. Wherever there is more than one person, differences of opinion are inevitable. Essentially, these differences are our wealth as a nation."

"As the president of Turkey, I believe that we must turn 2021 as the Year of the National Anthem into a historic opportunity," he said, while calling for the renewal of the "eternal and everlasting" fellowship through events to be organized on the occasion of this year.

The Turkish national anthem was written in 1921 by author Mehmet Akif Ersoy during the War of Independence as Turkey battled occupation by foreign forces after World War I. It was penned in order to encourage the fighting army and to motivate the struggling nation. It is also the official anthem of the Republic of Turkey, founded two years later in 1923.

The anthem, consisting of 41 lines and 12 quatrains, centers around timeless themes such as independence, war, civilization, faith, spirituality, courage, heroism and hope.