US museums seek to collect coronavirus artifacts for posterity 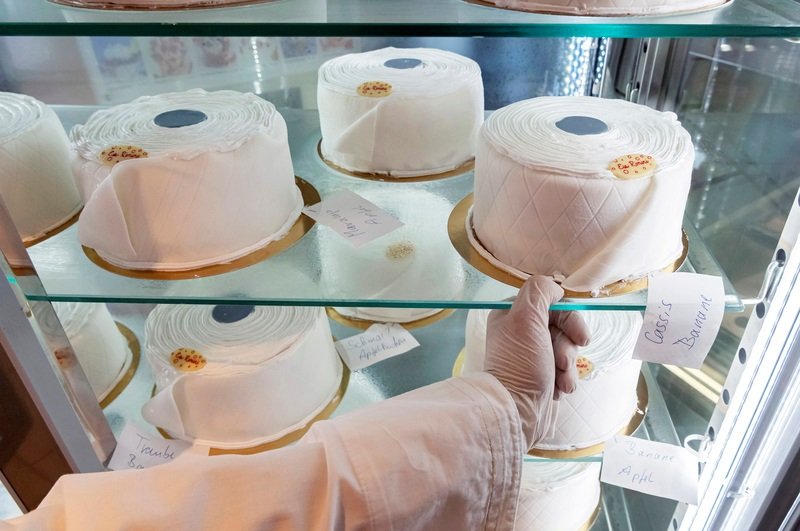 Ice cream cakes in the shape of toilet paper rolls are up for sale at an ice cream shop owned by Pino Cimino in the German town of Rastatt in this undated photo. (DPA PHOTO)
by German Press Agency - DPA Apr 14, 2020 11:07 am
Edited By Irem Yaşar
RECOMMENDED

In the struggle to stay safe and adapt to new, more conscripted realities, it can be easy to forget that the coronavirus pandemic isn't just a challenge to daily existence, it's a chapter in history. That's where museums are stepping in.

In the Midwestern U.S. state of Illinois, including its major city, Chicago, institutions already are asking people to document their experiences as COVID-19 disrupts norms and sickens fellow citizens.

"It's the realization that we're in the middle of a historical event. We wanted to get out there and start collecting and preserving it for posterity," says Erika Holst, the curator of history at the Illinois State Museum in downstate Springfield.

Her museum, like what the Naper Settlement did in suburban Naperville and similar to what the Chicago History Museum is planning to do, put out the call last week to "Share Your Story: Illinois in the COVID-19 Pandemic."

Asking folks to share their digital stuff, the state museum counsels, "Don't worry about how trivial it might seem; trust us, someone in the future will be interested to know that the stores ran out of toilet paper and how you felt about it."

"Everyone saw life as they knew it disappear a few weeks ago," Holst says. "We're getting used to this new normal. We're feeling anxious. We're feeling sad. Maybe we're feeling some hope for the future. And we want to see what that looks like for people."

Indeed, one of the early submissions that caught the eye of curators, Holst says, was a Springfield woman's photograph of a very special kind of cake at a local grocer.

"I took this photo because the cakes are funny," the woman wrote with her online submission, "but also because it is amazing how access to a single commodity (that doesn't even have to do with COVID-19 symptoms) has affected the nation."

Another person, says Holst, sent a picture of her full refrigerator, which didn't seem that telling until you read her accompanying story about a neighbor, already having economic struggles, whose fridge was empty.

The impulse is similar at Naper Settlement, the historical museum in Chicago's western suburb that includes vintage buildings on a campus.

"In the museum field it is called 'rapid response collecting,'" says Rena Tamayo-Calabrese, the settlement's president and CEO. "It is a term of art and it is a methodology."

The "Naperville 2020: Pandemic Collecting Initiative" asks people from Naperville and the broader community to donate writings and photos and, later on, when it becomes safe to do so, physical artifacts. There's a parallel "Naper Journals initiative" to encourage people to record and submit their thoughts and feelings at the moment.

"One of the greatest questions history helps us to answer is, how do life's big changes affect who we are and who we've become, and to answer the why," Tamayo-Calabrese said. "When people are journaling and it is their words, their videos, we have those primary resources for the future."

If the early submissions, like in Naperville and in Springfield, are any guide, toilet paper is going to be the comic relief in this history, the counterpoint to the parts about lives and ways of making a living being lost.

"We have received some very funny posts," says Tamayo-Calabrese. "For example, about going on the voyage to search for toilet paper. You know, 'It's stop No. 3 and we still haven't found toilet paper, but, hey, we've got 50 pounds of flour and we've made five loaves of bread."

The Chicago History Museum, on the city's North Side, is working to get a similar initiative going.

"We want to know ways the general public is receiving and understanding the impact of this," says John Russick, vice president for interpretation and education. "At the end of the day this is so much a human experience. We hope we can share how people got through this crisis, and what were the challenges and some of the heart-wrenching moments. What are the ways that people are coping?"

Like the others, the Chicago museum will be asking for uploadable materials first but later, when it becomes safer, physical artifacts.

And Russick hopes people will keep an eye out for telling items, like a sign a friend told him about in Evanston.

"Keep Calm and Carry Out," it says, a melding of the British World War II message to the populace and the desire to try to keep restaurants afloat in 2020 by ordering to-go.