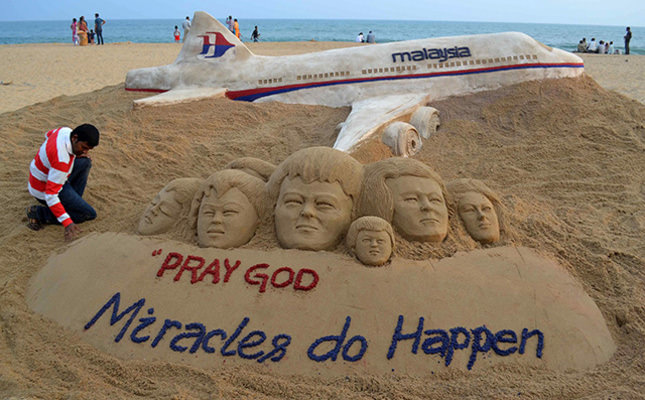 U.S. investigators are uncertain which ocean to search for the missing Malaysian plane

WASHINGTON – U.S. investigators suspect that Malaysia Airlines Flight 370 stayed in the air for about four hours past the time it reached its last confirmed location, the Wall Street Journal reported, citing two people familiar with the details.


The report comes as authorities remain uncertain about which ocean to search for the jetliner that went missing on Saturday after taking off from Kuala Lumpur.

It raises the possibility that the plane, and the 239 people on board, could have flown on for hundreds of additional miles under conditions that remain murky, the newspaper reported.

The last definitive sighting of the aircraft on civilian radar screens came shortly before 1:30 a.m. on Saturday, less than an hour after taking off from Kuala Lumpur, as it flew northeast across the mouth of the Gulf of Thailand bound for Beijing.

Aviation investigators and national security officials believe the plane flew for a total of five hours based on data automatically downloaded and sent to the ground from the Boeing Co 777's engines as part of a routine maintenance and monitoring program, the Journal said.

China's civil aviation chief said on Thursday that there was no proof that floating objects in the South China Sea seen by satellite images were connected to a missing Malaysia Airlines aircraft.

India's Defence ministry ordered the deployment of ships, aircraft and helicopters from the remote Andaman and Nicobar Islands on Thursday to search for a missing Malaysian airliner that disappeared from radar screens last Saturday.

The armed forces will hold a meeting on Thursday evening to decide how to coordinate their search efforts with other countries, after which they will make deployments, a senior command officer said.