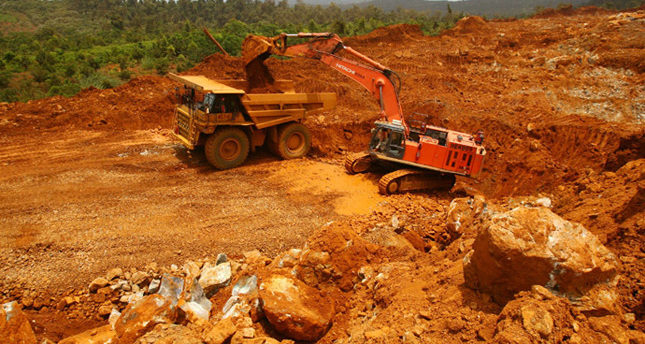 Indonesia has implemented law that will ban ore mineral export

Implemented in January, five years after the law was
initially passed, the ban has been met with confusion in the
mining sector.

It was introduced to encourage mineral processing in
Indonesia in order to increase the value of exports. But, one
group of mining companies has mounted a legal challenge, warning
that the ban on exports will force them out of business.

"The long term gains are at best uncertain," Jakarta-based
World Bank economist Jim Brumby said, adding there were no
success stories elsewhere in the world where countries had tried
to impose similar bans.

Brumby was speaking at the launch of the Bank's quarterly
economic report.

The World Bank estimated that for the period 2014-2017, the
negative impact on net trade could be $12.5 billion because of
the loss of export revenue while capital goods imports, to build
smelting capacity, will have to rise.

The potential cost in lost fiscal revenues, including
royalties and export tax, could be $6.5 billion.

And if a proposed major nickel mining and smelting project
in Weda Bay in the east of the country does not kick in by then,
the negative impact will go beyond 2017.

None of the major parties contesting next month's
parliamentary election and the presidential election in July
have suggested they would repeal the law, though some have said
that they would review its implementation.

Indeed, all the main parties agree Indonesia should do more
to make its exports more valuable.

Economic nationalism has become more evident in Indonesian
politics thanks in part to self-confidence arising from a
strengthening domestic economy. There is a popular belief that
foreign investors profit too much from exploiting the country's
enormous wealth of natural resources.

The ban has increased policy uncertainty, weakening the
investment climate for mining in Indonesia, when it was already
seen as one of the world's weakest, the World Bank report said.

"Over the longer term, this could prove to be the biggest
obstacle in increasing domestic value-addition, as it increases
investor risk perceptions at a time when economy-wide investment
has already decelerated," the report said.

It urged deeper analysis and wider consultation on the
issue.