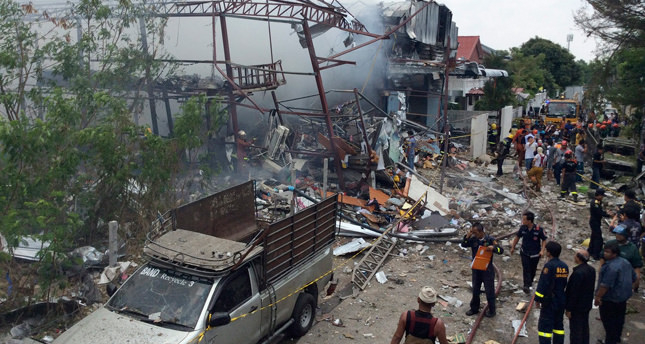 by Apr 02, 2014 12:00 am
BANGKOK — A suspected World War II bomb exploded in the Thai capital as scrap metal workers tried to cut it open with a blow torch, killing at least seven people and injuring 19, police said.

Construction workers found the shell at a construction site and brought it to a warehouse on the outskirts of Bangkok to be cut up. "We believe the bomb dates back to World War II and weighed about 227 kg. As they probably did not know (what to do), they used a blow torch to try to cut open the bomb," said police superintendent Kamthorn Uicharoen.

Pools of blood and body parts were scattered on the floor of the warehouse. Reuters camera footage showed just the shell of the building remained, its interior a mesh of twisted metal as firefighters doused flames and burning embers. Allied bombing raids on Bangkok began in 1942. Japan was using the country as a staging post for its invasions of Burma and Malaya.