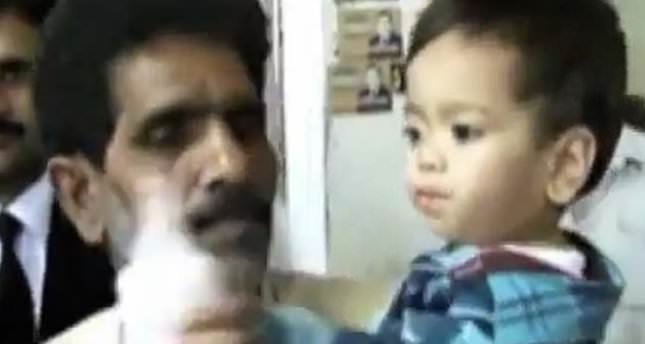 by reuters
Apr 08, 2014 12:00 am
LAHORE, Pakistan — Relatives of a nine-month old baby charged with attempted murder in Pakistan have taken him into hiding, one said on Tuesday, in a case that has thrown a spotlight on Pakistan's dysfunctional criminal justice system.
Baby Musa Khan appeared in court in the city of Lahore last week, charged with attempted murder along with his father and grandfather after a mob protesting against gas cuts and price increases stoned police and gas company workers trying to collect overdue bills.
At his first appearance in court last week, Musa cried while his fingerprints were taken by a court official. Later, the baby sucked on a bottle of milk and tried to grab journalists' microphones as his grandfather spoke to the media.
"He does not even know how to pick up his milk bottle properly, how can he stone the police?" the baby's grandfather, Muhammad Yasin, told reporters.
The baby was apparently charged because an assistant sub-inspector complained in a crime report that Musa's whole family had beaten him up and injured his head. The case highlighted dysfunction in Pakistan's police and justice system.
The provincial law minister, Rana Sanaullah Khan, told Reuters that the provincial chief minister had ordered an investigation into the charges against Musa. One policeman had been suspended, he said.
Last Update: Apr 08, 2014 6:50 pm