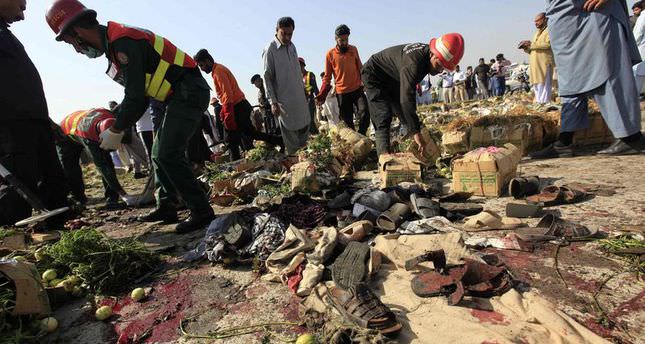 by AA
Apr 09, 2014 12:00 am
ISLAMABAD — At least 23 people have been killed and 42 injured in a huge blast in a busy fruit market in the capital Islamabad on Wednesday morning, police said.
"Many bodies have so far been brought to the hospitals, 42 of the injured look to be in critical condition", Sultan Azam Temori, a police chief, told reporters.
Hundreds of people were engaged in buying and selling in the the sprawling fruit market which serves the residents of the twin cities of Islamabad and Rawalpindi, when the blast occurred. The blast was as huge as it was heard within a radius of five kilometers.
The bomb was planted under fruit baskets, and around five kilograms of explosive material was used in the blast, Temori said.
There was no immediate claim of responsibility for the attack.
The blast has occurred just a day before a ceasefire between Taliban and security forces is going to end on Thursday. The country on the whole remained peaceful in last one month with no Taliban related violence due to the ceasefire.
Last Update: Apr 09, 2014 1:54 pm