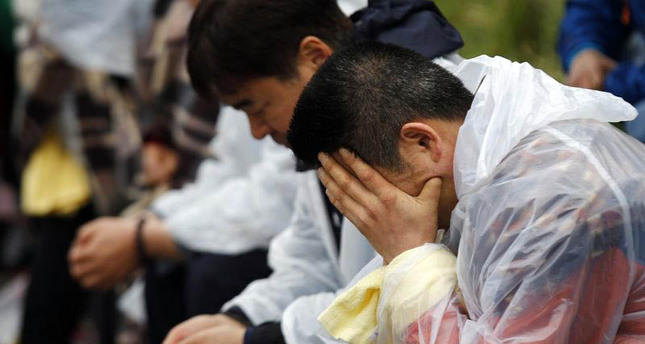 by AA
Apr 21, 2014 12:00 am
SEOUL — South Korea's president on Monday blamed last week's ferry tragedy off the country's southwestern coast on the vessel's captain and crew, as the confirmed death toll reached 64.

At a meeting with senior secretaries, Park Geun-hye promised to force those responsible for the disaster to face the "criminal and civil" consequences of their actions after public anger was fuelled late Sunday by the coastguard's release of a transcript revealing the final communications between the ship's crew and maritime safety controllers.

"Above all, the conduct of the captain and some crew members is unfathomable from the viewpoint of common sense, and it was like an act of murder," Park added.

More than 300 passengers are believed to be dead or missing following a delayed evacuation of the sinking Sewol ferry last Wednesday morning. The ferry had been carrying 476 people, most of them high school students, on its regular 13-hour route from Incheon to the resort island of Jeju.

The search Monday is directed towards the third and fourth floors of the submerged ship.

Arrest warrants were also issued Monday for the chief engineer of the Sewol and three mates, while the head and the chief shareholder of Chonghaejin Marine Co. - the ferry's operator - have been banned from leaving the country.