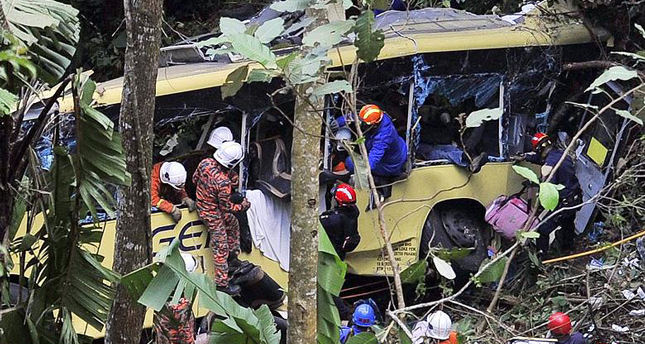 by Apr 21, 2014 12:00 am
KUALA LUMPUR — A passenger bus plunged into a ravine after leaving a Malaysian island resort, killing a British man and injuring 40 others, mostly foreign tourists, police said Monday.

A British man, 32, died of head injuries at the scene, he said. The other 37 passengers, more than half of them Singaporeans and two Malaysian drivers and a tour guide were hospitalised, mostly with minor injuries. The cause of the accident is still under investigation, Yahaya told AFP.

The passengers, including 19 Singaporeans, and others from France, United States, Britain, India, Myanmar and Vietnam -- had spent their holidays on Redang Island, Yahaya added. Bus crashes are common on Malaysia's modern highways with drivers sometimes speeding to meet tight schedules.

In the worst accident so far, 37 people were killed last year when their bus plunged into a ravine on the way down from a highland casino resort near the capital Kuala Lumpur. An official report on that crash published recently made 51 recommendations, including improving working conditions for drivers and making roads safer through safety barriers and signages, but critics say these have not been implemented.