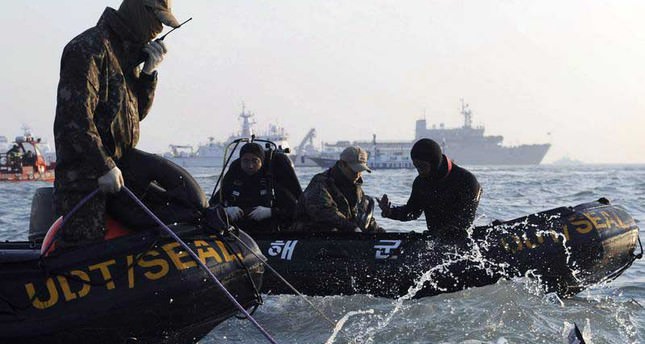 by AA
Apr 24, 2014 12:00 am
SEOUL — Divers continued the grim task Thursday of searching for passengers still unaccounted for as the scale of last week's South Korean ferry disaster continues to be realized.

By midday local time, 162 people had been confirmed dead, with another 140 still missing after the 6,825-ton Sewol capsized and sank on the morning of April 16.

The search teams' job looks set to get even tougher, as the weather forecast for South Korea's southwestern coast is for high tide and rain from Friday.

Divers were forced to cut through the ferry's walls to reach students believed to be trapped on the fourth floor.

Three large cranes that arrived in the area last week will not be put to use until the consent of all families of the missing has been given.

Most of the 476 people on board the Sewol were South Korean high school students on a trip to Jeju Island from their home in Ansan – a city that has now become the focal point of the country's grief.

Meanwhile, a total of 11 Sewol crew members were under arrest as of Wednesday, including the vessel's captain, accused of abandoning passengers after initially failing to order the ship's evacuation.

This week also saw prosecutors raid offices belonging to the ferry's operator, Cheonghaejin Marine Co., as well as the residence of its owner.

On Monday, South Korean President Park Geun-hye had likened the delayed evacuation of the Sewol to "murder," vowing to hold responsible all those found to be culpable.