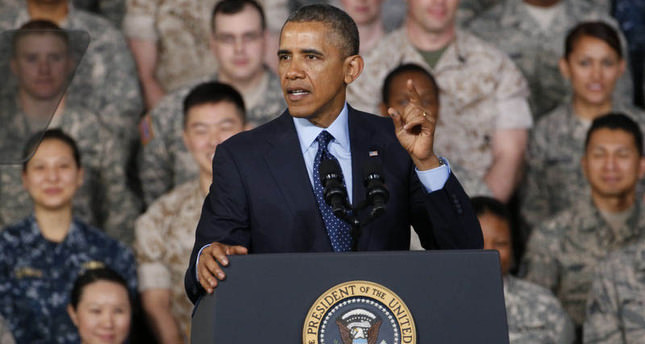 by reuters
Apr 26, 2014 12:00 am
SEOUL — President Barack Obama said on Saturday the United States did not use its military might to "impose things" on others, but that it would use that might if necessary to defend South Korea from any attack by the reclusive North.

The North warned last month it would not rule out a "new form" of atomic test after the U.N. Security Council condemned Pyongyang's launch of a mid-range ballistic missile into the sea east of the Korean peninsula.

Obama and South Korean President Park Geun-hye presented a united front against North Korea at a joint news conference following their summit on Friday, warning that they would respond firmly to any "provocations" by Pyongyang which routinely threatens the United States and South Korea with destruction.

Recent satellite data shows continued work at the nuclear test site in North Korea, although experts analyzing the data say that preparations do not appear to have progressed far enough for an imminent test.

Adding to tensions surrounding Obama's visit to South Korea, the North announced on Friday it had detained a 24-year-old American this month who demanded asylum after arriving in the country on a tourist visa.