South Korea PM to remain until ferry disaster under control 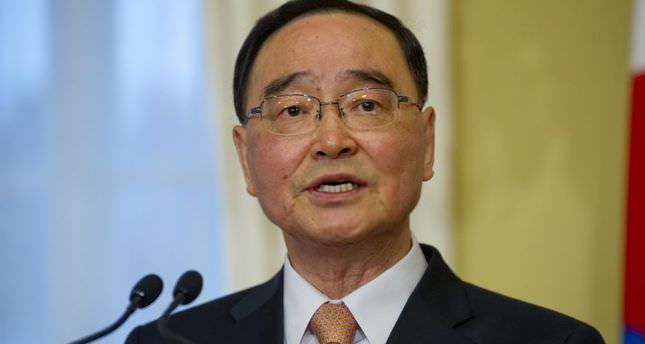 by AA
Apr 28, 2014 12:00 am
SEOUL — South Korean Prime Minister Chung Hong-won will carry on as the country's second-in-command only until the aftermath of this month's ferry disaster "settles down," according to a presidential office spokesperson.

Min Kyung-wook responded to Chung's earlier offer to resign by saying: "The president said wrapping up the accident and the rescue work is the most urgent job, so it would be right to accept his resignation after everything settles down."

With 302 people confirmed dead or still missing following the sinking of the Sewol ferry off South Korea's southwestern coast nearly two weeks ago, Chung pointed to "the pains of families of the victims and grief and anger of the people" as the main factor behind his decision.

As the search for those caught in the submerged ferry's wreckage continued for a thirteenth day, rescue teams were hampered by strong winds, rain and high waves.

The official death toll remained unchanged from the previous day at 188, leaving 114 still unaccounted for.

The captain and 14 key members of his crew are under arrest on multiple, including negligence of duty for evacuating with hundreds of passengers still on board the vessel.

The Sewol's owner company, Chonghaejin Marine, is also under investigation as police and prosecutors aim to discover the cause behind the accident on the morning of April 16.