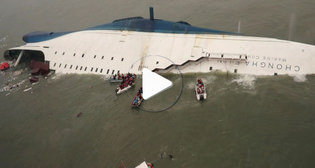 by daily sabah
Apr 29, 2014 12:00 am
The public's already dim view of the crew worsened when the coastguard released a video showing the trouserless captain scrambling to safety as hundreds of his passengers remained trapped inside the ferry.

The video shows 69-year-old Lee Joon-Seok, wearing a sweater and underpants, hastily escaping from the bridge of the tilting ship.

The footage shows the open decks nearly empty, after crew repeatedly instructed passengers to stay in their cabins until it became impossible for them to evacuate.

The delay in the crucial final stages,when most crew members fled the ferry, sparked outrage that many lives could have been saved if passengers had received timely instructions.