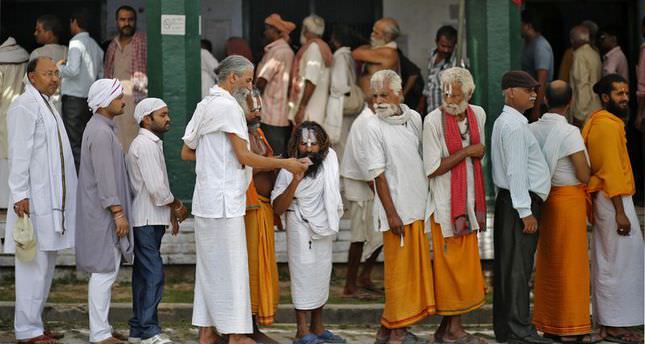 by AA May 07, 2014 12:00 am
NEW DELHI — India's national election will enter its eighth, and penultimate, phase of voting when seven states go to the polls for 64 parliamentary seats on Wednesday.

Southern state Andhra Pradesh, which has been split into two with the recent establishment of Telangana state, will see the biggest day of voting with 25 constituencies being contested. Voting in all constituencies of northern states Himachal Pradesh and Uttarakhand will be completed Wednesday.

Voting in Indian-held Jammu & Kashmir, where voting has been very low following boycotts by pro-Independence groups, will be completed after polling in the last two constituencies.

Out of the 543 constituencies in Indian parliament's lower house, 438 have already gone to polls in the six-week-long national election, which started on April 7.

According to exit polls, the BJP, which has been in opposition since 2004, is expected to form the next federal government.