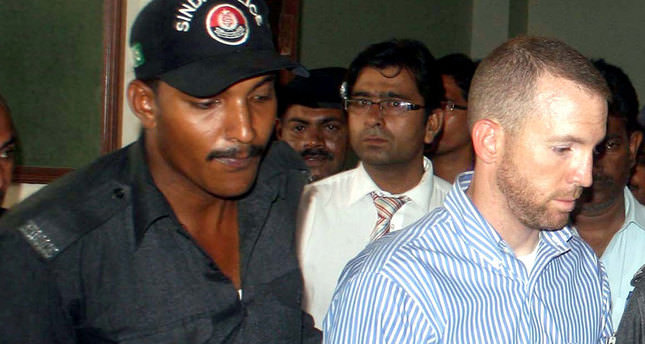 by May 08, 2014 12:00 am
ISLAMABAD — A U.S. Federal Bureau of Investigation (FBI) agent arrested in Pakistan for trying to board a civilian flight with bullets and a knife in his luggage is being investigated on possible criminal charges, Pakistani authorities said on Thursday.

Joel Cox, confirmed by the U.S. State Department as an FBI agent, was arrested on Sunday at the airport in the southern city of Karachi after trying to board a flight with the knife and 15 9 mm bullets in his luggage, police said.

The case has revived memories of Raymond Davis, an American Central Intelligence Agency contractor who was arrested in January 2011 after shooting dead two men he believed were about to rob him in the eastern city of Lahore.

Many Pakistanis were angry that Davis was released after compensation was paid to the families of the dead and they then pardoned him, a practice allowed under Pakistani law.

Police said Cox had been charged with weapons offences but could still be given bail.

"He's on judicial remand. Questions are obviously being asked, what is he doing with bullets and a knife?" said foreign office spokeswoman Tasnim Aslam.

"Police are investigating. Obviously they would like to get to the bottom of this," she said.

Cox appeared in court on Tuesday on what police said were charges of carrying unauthorised ammunition on a civilian flight and was remanded in custody.

His equipment, including his laptop, has been sent to a forensic laboratory for testing. Cox is due to appear in court again on Saturday.

"This individual detained is an employee of the FBI, who was on a temporary duty assignment to provide routine assistance to the legal attache at the U.S. mission," spokeswoman Jen Psaki said in her daily briefing in Washington on Wednesday.

"We are coordinating closely to resolve this with authorities, and we are hopeful in that regard," she said.

The Davis case demonstrated the deep suspicion on both sides that pervades the uneasy alliance between the United States and Pakistan. Both governments officially cooperate on fighting militancy but have traded public accusations in the past.