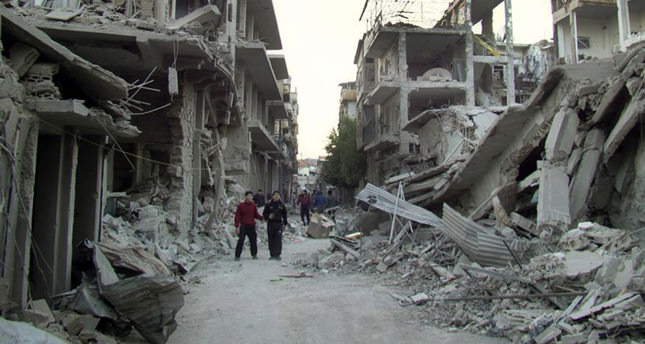 Hundreds of members of the Syrian opposition began evacuating their last bastions in the central city of Homs under a ceasefire deal struck last week with government forces, opposition activists and the city's governor say

HOMS, Syria — After years of battling regime forces loyal to Syrian leader Bashar Assad, stranded civilians and some 1,200 fighters withdrew from Homs' old city yesterday under a deal brokered by the United Nations. The Syrian opposition yesterday started to leave from their last stronghold in the central city of Homs under a deal reached with President Bashar Assad.

The exit of some 1,200 fighters from Homs will mark a de facto end to the rebellion in the battered city, which was one of the first places to rise up against President Bashar Assad's rule, earning its title as "the capital of the revolution."

An activist who goes by the name of Abu Yassin al-Homsi said all fighters and any remaining civilians were expected to leave the city during the day, adding that they would be taken a few kilometers north to the rebel held towns of Talbiseh and al-Dar al-Kabira on the northern edge of Homs province a short drive away. Later, al-Homsi confirmed later that the first group of fighters that evacuated the city center had "arrived safely" in rebel-held areas north of the province.

It was a bitter moment for the exhausted opposition, who have been holed up in the historic quarters of Homs where they had pledged to fight till the end.

Isolated and battered after months of bombardment and blockades that caused widespread hunger, they agreed last Friday to a cease fire deal that would allow hundreds of fighters to evacuate their last strongholds in Homs.

Their exit hands over to al-Assad's forces a strategic but largely destroyed city ahead of presidential elections scheduled to be held on June 3. While the agreement represents a demoralizing admission of defeat by opposition forces, it can also be seen as a face-saving deal for both sides. In exchange for their evacuation, activists say opposition fighters will allow aid into two northern pro-government villages, Nubul and Zahra, besieged by the opposition.

Director of the London-based Syrian Observatory for Human Rights, Rami Abdurrahman, said roads to Nubul and Zahra in northern Syrian were opened as the evacuations from Homs started, apparently to allow the flow of aid.

As part of the Homs deal, the opposition would also release up to 70 pro-government gunmen. More than 150,000 people have died in Syria's civil war. Millions more have fled their homes and the government has lost control of swathes of territory across the north and east.
Fighting regularly kills more than 200 people a day. Despite the carnage, Syrian authorities have scheduled presidential elections for June 3, a vote likely to give al-Assad a third term in office. Assad's opponents have dismissed the election as a farce.