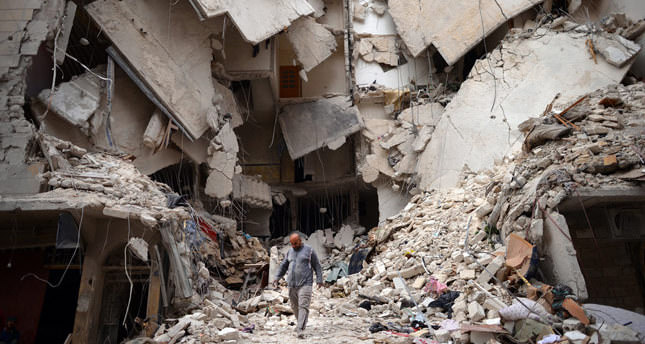 by May 08, 2014 12:00 am
ALEPPO, Syria — Opposition forces in Syria said they killed at least 50 government troops when they blew up a hotel in the city of Aleppo Thursday, while in the central city of Homs the last rebels prepared to leave the besieged Old City under a deal with the government.

"Our holy warriors this morning blew up the Carlton Hotel barracks in Old Aleppo and a number of adjoining buildings, killing more then 50 soldiers," the Islamic Front rebel alliance posted on its Twitter account.

Opposition forces planted large quantities of explosives in tunnels they dug beneath the building, which was being used as a base by government forces, according to Rami Abdel-Rahman, director of the opposition Syrian Observatory for Human Rights.

Abdel-Rahman put the death toll at 14, with some 30 killed in the explosion and the subsequent collapse of nearby buildings.

The hotel was located beside Aleppo's citadel, a government stronghold in the historic heart of the city which has been on the front line between regime and rebel forces.

A video posted online by the Islamic Front showed a massive explosion beneath the citadel, followed by the sound of automatic gunfire.

Syria's official SANA news agency said that in "a major attack on the monuments of old Aleppo, armed terrorist groups blew up tunnels they had dug under historic buildings leading to major damage." It made no
mention of casualties.

Opposition forces used similar tactics to destroy a strategic government checkpoint in nearby Idlib province on Monday, killing at least 30 troops, according to the Observatory.

The Aleppo attack took place as buses carried some of the last rebel fighters out of the besieged Old City of Homs, on the second day of an evacuation deal reached with the government of President Bashar al-Assad.

The last few hundred fighters and civilians were due to be transferred to opposition-held territory just north of the central Syrian city, after some 968 fighters were evacuated on Wednesday.

"The remaining rebels and civilians are between 400 to 500 and we hope, if the operations go at the same speed as yesterday, the Old City of Homs will be empty by the end of the day," Omar al-Homsi, a local activist, told dpa by phone.

Observatory head Rami Abdel Rahman put the number of people remaining to be evacuated at up to 300.

The pro-regime Al-Dunia television channel quoted Homs governor Talal al-Barazi as saying that 80 per cent of the people inside the Old City had been evacuated under the deal, which also saw rebels in northern Syria release dozens of regime fighters and civilians from al-Assad's Alawite sect whom they had been holding hostage.

The evacuation is going ahead even though another component of the deal - the arrival of humanitarian aid in two government-held enclaves in northern Aleppo province - has not yet been implemented.

Once it is complete, the al-Waer district in the west of the city will be the only remaining opposition foothold in a city seen as one of the cradles of the 2011 revolt against al-Assad.

Some local sources said that a similar evacuation deal was being negotiated for fighters in al-Waer.

Homs, Syria's third-largest city, has a strategic position linking the country's main north-south axis with the route to the government's strongholds on the Mediterranean coast.