Syrian conflict rages in the north while evacuation underway in Homs 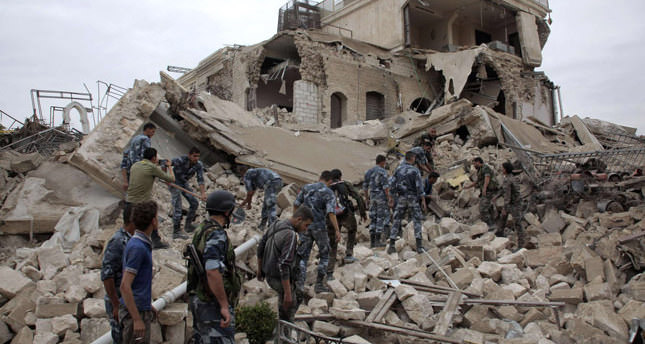 The Syrian opposition claims responsibility for a bomb attack in the city of Aleppo that devastated a hotel occupied by Assad's forces, while opposition forces in Homs evacuated the besieged old city under a deal with the government

ALEPPO, Syria — A "huge explosion" yesterday in the northern city of Aleppo leveled a hotel that government troops used as a military base, along with several other buildings in a government-held area, state television and activists reported.

Both groups did not say how they compiled those figures, and the claims could not be independently verified. In a live broadcast from the site of blast, a correspondent from Syrian state TV in Aleppo stood on a huge pile of rubble with twisted metal and palm trees sticking out, saying that the army had been using the building as a base and soldiers were positioned there at the time of the explosion. In the broadcast, state television did not mention casualties. The attack in Aleppo is a blow to President Bashar Assad's government in the north as his troops prepare to regain control of the central city of Homs following last week's cease-fire agreement after a fierce, two-year battle with the rebels trying to oust him.

No such agreement appears to be in sight in Aleppo, Syria's largest city and former commercial hub. The city has been carved up into opposition- and government-held areas since the opposition launched an offensive there in mid-2012, capturing territory along Syria's northern border with Turkey.

In recent months, government aircraft have relentlessly bombed rebel-held areas of the city and opposition fighters have hit back, firing mortars into government-held areas. Thursday's attack targeted a government- held area on the edge of a contested neighborhood in an old district of Aleppo.

A local activist group called the Sham News Network also reported the blast, saying that al-Assad's troops were based in the hotel. The opposition posted a statement on its official Twitter account Thursday saying that its "fighters this morning leveled the Carlton Hotel barracks in Old Aleppo and a number of buildings near it, killing 50 soldiers." The Syrian government does not publicize its casualties in the civil war.

The Aleppo attack took place as buses carried some of the last fighters out of the besieged Old City of Homs, on the second day of an evacuation deal reached with the government of President Bashar Assad.

The last few hundred fighters and civilians were due to be transferred to rebel-held territory just north of the central Syrian city, after a reported 968 fighters were evacuated on Wednesday. "The remaining fighters and civilians are between 400 to 500 and we hope, if the operations goes at the same speed as yesterday, the Old City of Homs will be empty by the end of the day," Omar al-Homsi, a local activist, told Deutsche Presse-Agentur (dpa) by phone.

The evacuation is going ahead even though another component of the deal - the arrival of humanitarian aid in two government- held enclaves in northern Aleppo province - has not yet been implemented.

Once it is complete, the al-Waer district in the west of the city will be the only remaining rebel foothold in a city seen as one of the cradles of the 2011 revolt against al-Assad.

Some local sources said that a similar evacuation deal was being negotiated for fighters in al-Waer. Homs, Syria's third-largest city, has a strategic position linking the country's main north-south axis with the route to the government's strongholds on the Mediterranean coast.