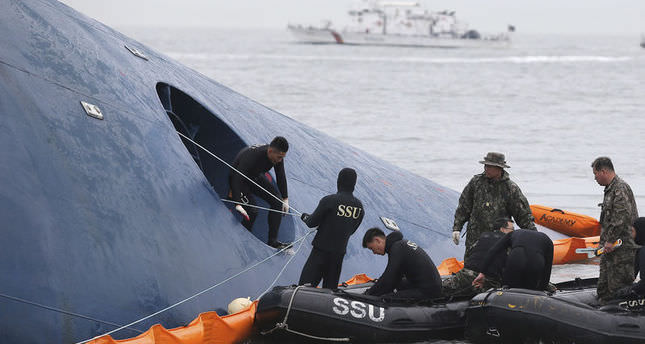 by AA May 13, 2014 12:00 am
SEOUL — The official death toll from last month's sinking of the Sewol ferry off South Korea's southwestern coast rose to 276 Tuesday as another body was recovered from the wreckage.

With 28 of the 476 passengers – mostly high school students - who had boarded the vessel still unaccounted for, divers resumed their search operation early Tuesday morning, following a three-day suspension due to bad weather.

Concerns were mounting that the ferry might collapse, nearly a month after it capsized April 16 while travelling from southwestern Incheon port to the resort island of Jeju.

A state response team official told reporters that divers "had spotted some walls getting weaker and about to collapse."

With strong currents still posing problems, the officials said they would attempt to clear new routes to as yet unreachable parts of the 6,825-ton ferry's hull.

Meanwhile, prosecutors said Tuesday that they have asked the allegedly de facto owner of the Sewol ferry's operator, Chonghaejin Marine Co., to appear for questioning this Friday.

Investigators said 73-year-old Yoo Byeong-eun could face a series of charges, including embezzlement, tax evasion, bribery and dereliction of duty.

Officials also confirmed the state auditor is set to begin a 20-day inspection of the country's Coast Guard West Regional Headquarters in Mokpo city over its response to the disaster.

Prosecutors and police said they are considering bringing murder charges against the captain as well as indicting fourteen crewmembers for having escaped the sinking ship after delaying the evacuation of those still on board.

By contrast, the government honored Monday three Sewol crewmembers who lost their lives saving others.

Jung Hyun-seok and Kim Ki-woong had been due to marry later this year, while Park Ji-young was the youngest of the crew at 22 years old.

By being officially named "martyrs," they will be granted burials at a national cemetery and their families will be eligible for financial and medical support.