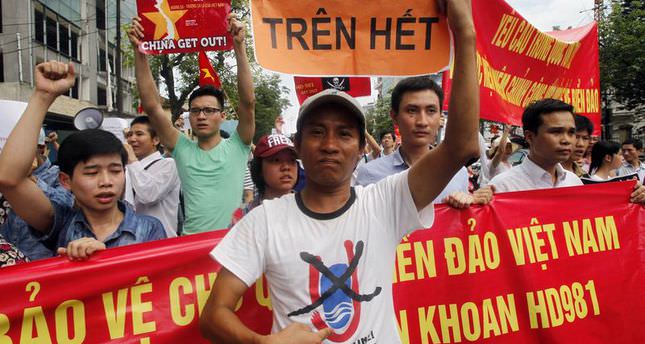 by May 14, 2014 12:00 am
HANOI/MANILA — Thousands of Vietnamese set fire to factories and rampaged in industrial zones in the south of the country after protests against Chinese oil drilling in a part of the South China Sea claimed by Vietnam, officials said on Wednesday.

The brunt appears to have been borne by Taiwanese companies in the zones in Binh Duong and Dong Nai provinces as rioters mistook the firms to be Chinese-owned. Vietnamese officials gave few details, but said gates to factories were smashed and windows were broken. Police said they were investigating.

A Singapore foreign ministry spokesman said the premises of a number of foreign companies were broken into and set on fire in the Vietnam-Singapore Industrial Parks (VSIP) I and II in Binh Duong. The spokesman said the Singapore government had asked Vietnam to immediately restore law and order, but gave no other details.

Anti-China sentiment also surged in Manila, as the Philippine government accused Beijing of reclaiming land on a reef in disputed islands in another part of sea, apparently to build an airstrip. The action came only a day after Washington described Beijing's actions in the region as "provocative".

The spike in tensions over the oil- and gas-rich South China Sea comes just two weeks after U.S. President Barack Obama visited the region and expressed support for long-time allies Japan and the Philippines, both of which are locked in territorial disputes with China.

Vietnam is also stepping up ties with the United States.

China claims almost the entire South China Sea, an area rich in energy deposits and an important passageway traversed each year by $5 trillion worth of ship-borne goods.
Brunei, Malaysia, the Philippines, Taiwan and Vietnam also have claims on the area.