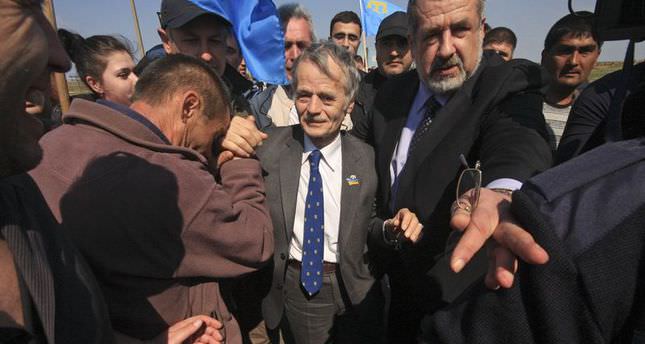 by May 15, 2014 12:00 am
BAKHCHISARAY, Crimea — Seventy years after their families' mass deportation under Soviet leader Josef Stalin, the Crimean Tatars are in a quandary: should they cooperate with their homeland's new Russian authorities or resist them?

Some Tatars - Sunni Muslims of Turkic origin - fear a return to Stalinist repression despite official promises to respect their rights and freedoms; others say dealing with Russia is the best way of ensuring their people can flourish.

Less than two months into Moscow rule, tensions are running high before Sunday's anniversary of the deportations in cattle wagons which began on May 18, 1944.

"It's either war or compromise. That is the essence of the problem we face. If we don't adopt a unified approach, we risk splitting ourselves up and being marginalized," said Nariman Dzhelyalov, deputy chairman of the Mejlis, the Crimean Tatars' main representative body.

The Tatars, who make up more than 12 percent of Crimea's largely ethnic Russian population of about 2 million, are among the most vociferous critics of Moscow's annexation in March of the peninsula previously governed by Ukraine.

Russia views the annexation as righting an historical injustice, describing it as "reunification" of a region which Soviet leader Nikita Khrushchev handed to Ukraine only in 1954.

But the Tatars, whose historical capital of Bakhchisaray lies a short distance from the modern day regional centre of Simferopol, remind Moscow they ruled large parts of Crimea for centuries before Russian Empress Catherine the Great conquered the Black Sea peninsula in the late 18th century.

Stalin accused the Tatars of sympathizing with Nazi Germany, and many of the estimated 200,000 deportees died on their way into exile in Central Asia and eastern Russia. Only in the last years of the Soviet Union were members of the community able to start returning to Crimea in the 1980s.

Many Tatars boycotted a referendum on March 16 when local authorities say 97 percent of those who voted opted to join Russia. Kiev and the West derided the exercise as illegitimate.

The Tatars have continued to fly the Ukrainian flag at the Mejlis since the vote, despite a visit by armed pro-Russian "self-defense" units and threats to close their organization by the region's chief prosecutor. "We're used to constant struggle. We don't trust the Russian authorities, and why should we? They have always opposed the Crimean Tatars," Dzhelyalov said.