Russia orders troops back to base 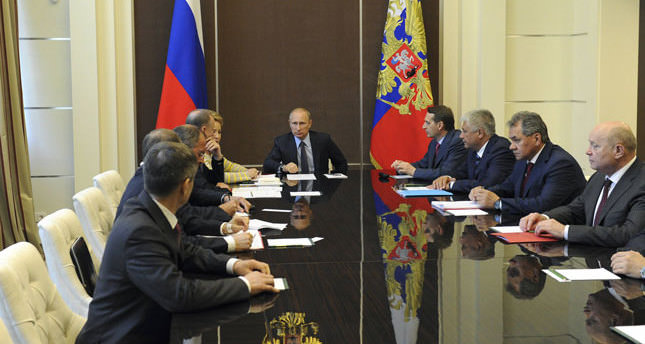 by May 19, 2014 12:00 am
MOSCOW — Russian President Vladimir Putin has ordered military forces to return to their permanent bases after drills in three regions bordering Ukraine, the Kremlin said on Monday.

Putin's office said he had issued the order because the spring maneuvers were over. The move could also be intended to ease tension in Russia's standoff with the West over Ukraine before Kiev holds a presidential election on Sunday.

In Brussels, however, a NATO military officer said the military alliance had seen no sign of the Russian troops returning to their bases.

"We haven't seen any movement to validate (the report)," the officer, speaking on condition of anonymity, said.

The Kremlin said in a statement that Putin had ordered his defense chief to return troops that had been involved in exercises in the border provinces of Rostov, Bryansk and Belgorod to their "places of permanent deployment".

NATO has said Russia has amassed some 40,000 troops near the border with Ukraine, and Putin has reserved the right to send forces in to protect Russian-speakers if necessary.

Their presence on the border increased tension after Russia's annexation of Crimea in March and raised fears in the West that Moscow could invade to support pro-Moscow separatists.

It was not immediately clear how many soldiers would be moved away from border regions as a result of Putin's order. After Putin also said on May 7 that forces had been withdrawn from the frontier, but NATO and the United States said there were no signs of reductions.

In another conciliatory signal, Putin welcomed what the Kremlin said were initial contacts between the Ukrainian government and "supporters of federalization" who want more power for largely Russian-speaking regions in eastern Ukraine. Russia wants Kiev to speak directly to the separatists.

Putin also reiterated Russia's demand that Kiev end what the Kremlin calls a "punitive operation" against the separatists and pull back its troops, suggesting the pro-Western government is to blame for the violence.