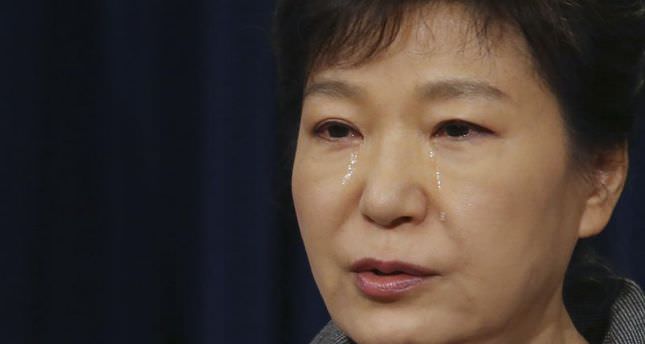 by AA May 19, 2014 12:00 am
SEOUL — Tears ran down the South Korean president's cheeks Monday as she issued her most public apology yet over last month's ferry disaster that left more than 300 people – mostly high school students - dead or missing.

"As president responsible for the people's lives and safety, I offer a heartfelt apology for the pains the people have suffered," Park Geun-hye said during an address that was televised nationwide.

The South Korean government has come under increasing criticism for its response to the April 16 disaster off the country's southwestern coast.

Prosecutors have already indicted the sunken Sewol ferry's captain and three crewmembers on homicide charges after they abandoned the ship having delayed an evacuation order, while an investigation into the vessel's owner company is ongoing.

President Park went further on Monday morning, announcing a series of public safety-related measures, including the dismantling of the country's Coast Guard.

"The Coast Guard failed to fulfill its original duties in the Sewol accident. Had it actively carried out rescue efforts immediately after the accident, it would have been possible to greatly reduce sacrifices," Park said.

Search teams continued to scour the ferry's wreckage on Monday, with 18 people still missing and an official death toll of 286.
The Coast Guard's duties are set to be shifted to other agencies, including a new ministry of national safety.

Park vowed to clamp down on the kind of corrupt official and business relationships that may have placed personal ties ahead of safety measures, insisting she would "end the harmful effects of bureaucratic mafia."

"This accident showed how big a calamity can be brought about by the abnormal practice of collusion between the government and civilians," the president added.

Park also appeared to appease those calling for a more thorough investigation into the ferry disaster, proposing that a fact-finding committee be established.

Protest organizers claimed up to 50,000 people rallied in Seoul at the weekend in the largest street demonstration since the Sewol sank, though police put the number at 11,000.

Having already made several private apologies, Park's Monday address came after calls for a more sincere gesture and amid tumbling approval ratings.

But it was back to other business immediately after the briefing, as Park was scheduled to participate in a two-day trip to the United Arab Emirates to mark the installation of the first nuclear reactor built by a Korean consortium overseas.