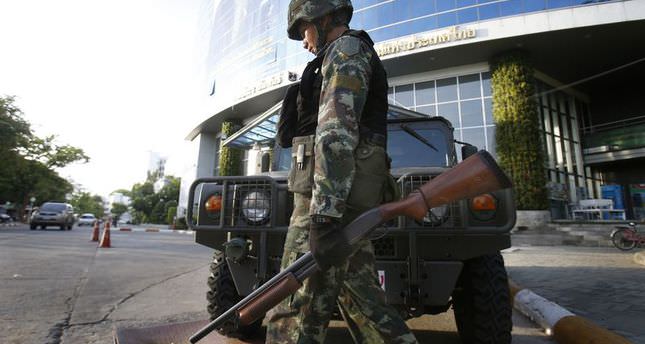 by May 20, 2014 12:00 am
BANGKOK — Thailand's powerful army declared martial law before dawn Tuesday, deploying troops into the heart of Bangkok in a dramatic move it said was aimed at stabilizing the Southeast Asian country after six months of turbulent political unrest.

The military, however, insisted a coup d'etat was not underway.

The surprise operation, which places the army in charge of public security nationwide, came amid deepening uncertainty over the nation's fate and one day after the caretaker prime minister refused to step down in the face of long-running anti-government protests.

On a major road in front of one of the country's most luxurious shopping malls, bystanders gawked at soldiers in jeeps mounted with machine guns who briefly diverted traffic. The mood wasn't tense; passers-by stopped to take cell phone pictures of the soldiers.

Thailand, an economic hub for Southeast Asia, has been gripped by off-and-on political turmoil since 2006, when former Prime Minister Thaksin Shinawatra was toppled by a military coup after being accused of corruption, abuse of power and disrespect for King Bhumibol Adulyadej.

The army, which is seen by many as sympathetic to anti-government protesters, has staged 11 coups since the end of absolute monarchy in 1932, but made no moves Tuesday to dissolve the country's constitution or its current, caretaker government.
Acting Prime Minister Niwattumrong Boonsongpaisan called an emergency Cabinet meeting to discuss the situation at an undisclosed location.