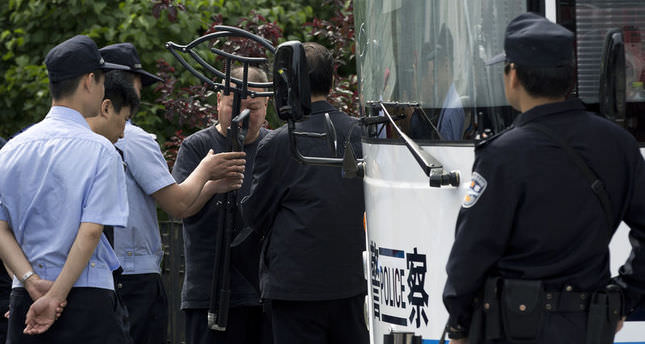 by May 21, 2014 12:00 am
URUMQI — Courts in China's Xinjiang (East Turkestan) region have jailed dozens of people in a special operative to curb the spread of audios and videos inciting 'terrorism', the Xinjiang Supreme Court said Wednesday.

In statements posted to its official microblog, the court said 39 people were sentenced to prison Tuesday after being convicted of crimes including organizing and leading terrorist groups, inciting ethnic hatred, ethnic discrimination and the illegal manufacturing of guns.

The Xinjiang region known as East Turkestan, home to the Turkic-speaking Muslim minority of Uyghurs has seen a surge in violence protesting Beijing's rule. Most recently, assailants targeted civilians in a suicide attack outside a train station in the regional capital of Urumqi last month, killing three people, including two suspected attackers.

Beijing blames the violence on secession-seeking terrorists and has vowed a severe crackdown.

Among those convicted Tuesday was 25-year-old Mehmetniyazi Ayni, who received five years in prison for inciting ethnic hatred and ethnic discrimination for comments he made in six chat groups involving 1,310 people, the Supreme Court said.

Critics and human rights watchers have said Beijing's suppressive ethnic, cultural and religious policies have bred dissatisfaction and anger among the Uighurs. Some say the marginalized Uighurs are more vulnerable to extreme thoughts.