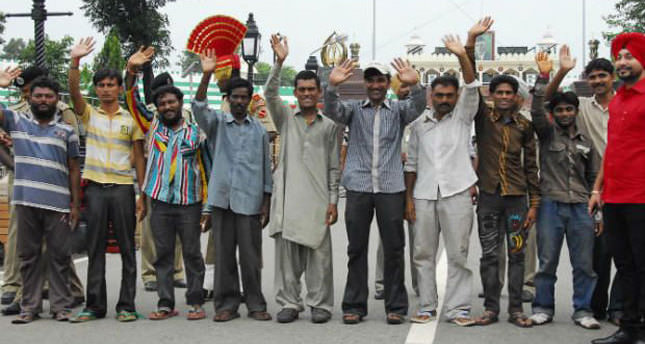 by AA May 25, 2014 12:00 am
ISLAMABAD — Pakistan has announced to release 151 Indian prisoners serving in various Pakistani jails ahead of Prime Minister Nawaz Sharif's visit to the Indian capital of New Delhi to attend the swearing-in ceremony of his Indian counterpart, Narendra Modi.

The decision was taken on the instruction of Sharif as a goodwill gesture, according to a press release issued by prime minister's office.

The prisoners -- all fishermen who were detained by Pakistani maritime security agency for violating the country's territorial waters -- will be handed over to Indian authorities at Wahga border crossing Monday when Modi is set to be sworn-in.

Some 57 boats seized by Pakistani maritime agency will also be handed over to Indian authorities.

Sharif will be the first-ever Pakistani prime minister to attend the oath taking ceremony of an Indian PM.

Arrests of fishermen from both sides have been a frequent affair due to unmarked territorial waters.

According to Pakistani maritime authorities, 568 Pakistani prisoners -- including 158 fishermen -- are staying in Indian jails for many years.

Pakistan's Foreign Office hopes to receive a similar goodwill gesture from India in the form of their release. Pakistan had already released over 300 Indian prisoners in August last year.

Meanwhile, Sri Lanka's President Mahinda Rajapaksa also ordered the release of all Indian fishermen who have been detained in the country due to a similar territorial waters dispute with India.