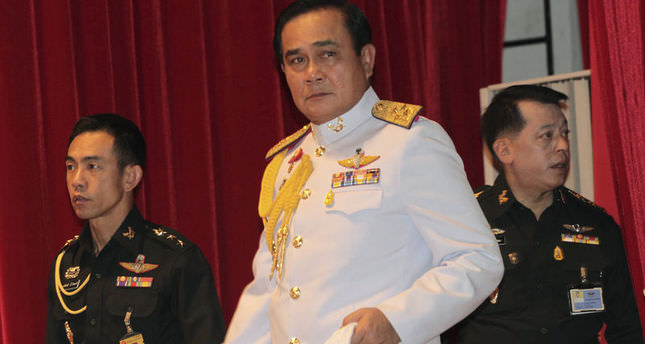 by AA May 26, 2014 12:00 am
BANGKOK — After receiving the Thai king's official endorsement to head the country's junta Monday, General Prayuth Chan-ocha threatened he "would have no choice but to use force" if anti-coup demonstrations in Bangkok continue.

Donning a white uniform with his military subordinates at his side, Prayuth sounded both remorseful and threatening in his first press conference as the country's new leader.

After apologizing for "any extra-tough measures" - which he underlined as "necessary" - and saying he "is not here to fight, but to fix the country's problems," he asserted in the same breath: "for this, I am ready to do anything."

On Sunday evening, a decree by the National Council for Peace and Order - the junta's official name - stipulated that anyone disobeying its orders, including the ban on gatherings of more than five people, would be brought before martial court.

Despite this, more anti-coup protests - which gathered hundreds across the capital over the weekend - are planned for Monday.

General Prayuth appointed himself prime minister Friday after declaring a coup - the 19th since the overthrow of the absolute monarchy.

The National Council for Peace and Order also announced Saturday the dissolution of the Senate -- the only standing legislative assembly.