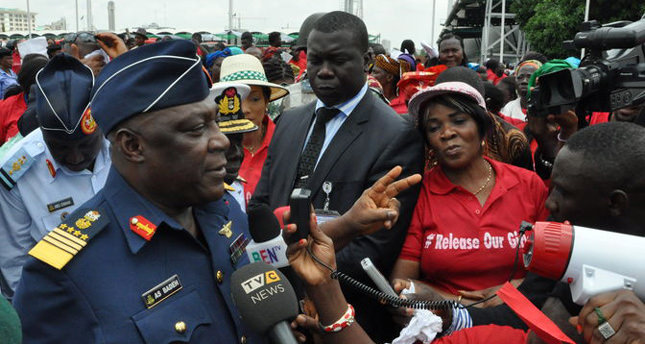 by May 27, 2014 12:00 am
ABUJA, Nigeria — Nigeria's military has located nearly 300 school girls abducted by Islamic extremists but fears using force to try to free them could get them killed, the country's chief of defense said Monday.

Air Marshal Alex Badeh told demonstrators supporting the much criticized military that Nigerian troops can save the girls. But he added, "we can't go and kill our girls in the name of trying to get them back."

He spoke to thousands of demonstrators who marched to Defense Ministry headquarters in Abuja, the capital. Many were brought in on buses, indicating it was an organized event.

Asked by reporters where they had found the girls, Badeh refused to elaborate.

"We want our girls back. I can tell you we can do it. Our military can do it. But where they are held, can we go with force?" he asked the crowd.

That appeared to leave negotiation the sole option, but a human rights activist close to negotiators said a deal to swap the girls for detained Boko Haram members was agreed last week and then scuttled at the last minute by President Goodluck Jonathan.

The activist who is close to those mediating between Boko Haram extremists and government officials said the girls would have been freed last week Monday.

Jonathan had already told British officials that he would not consider an exchange. The source spoke on condition of anonymity because of the sensitivity of the issue.

Nigeria's military and government have faced national and international outrage over their failure to rescue the girls seized by Boko Haram militants from a remote northeastern school six weeks ago.

President Jonathan was forced this month to accept international help. American planes have been searching for the girls and Britain, France, Israel and other countries have sent experts in surveillance and hostage negotiation.