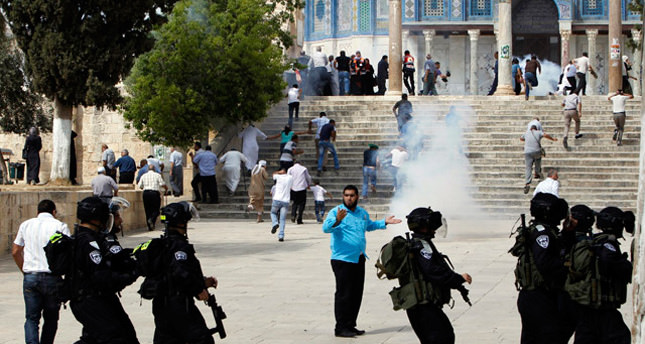 by AA May 28, 2014 12:00 am
JERUSALEM — Three Turkish nationals were injured by Israeli police during clashes in Al-Aqsa Mosque compound in East Jerusalem, spokesman for a Palestinian NGO said Wednesday. "Israeli police assaulted a group of Turkish nationals inside the complex and injured three of them," Al-Aqsa Foundation for Endowment and Heritage spokesman Mahmoud Abu Atta told Anadolu Agency. The trio was taken to Al- Makassed Hospital in the city for treatment, he said, giving no details on how serious their injuries are. "The Turks entered Al-Aqsa compound to join hundreds of Palestinian worshippers who stood on guard against any intrusion of Jewish settlers, before the Israeli police assaulted them with batons," he added. Eyewitnesses told Anadolu Agency that Turkish Consul General in Jerusalem Mustafa Sarnic arrived in the scene to follow up the situation amid reports that scores of worshippers, including Turks, are being trapped inside the holy site. A Palestinian guard of the compound told AA earlier that a number of worshippers are trapped at Al-Qibali Mosque inside the compound, including Turkish nationals who came in the early hours of Wednesday for prayers. "We are here with the Palestinians to defend Al-Aqsa against the Israeli attack," one of the Turkish visitors inside the compound told AA. "We were attacked as we were preparing to pray at Al-Aqsa Mosque," the Turk, who asked not to be named, added. Clashes erupted on Wednesday morning between Palestinian worshippers and Israeli troops at Al-Aqsa complex as the latter facilitated the intrusion of scores of Jewish settlers into the compound. The developments come as Israel is set to mark the so-called Jerusalem Day, which is celebrated every year on Iyar 28 on the Hebrew calendar, to commemorate the "reunification" of the holy city in June 1967 when its forces occupied it. In recent months, groups of extremist Jewish settlers, often accompanied by Israeli security forces, have repeatedly forced their way into the mosque complex. The frequent violations anger Palestinian Muslims and occasionally lead to violent confrontations. For Muslims, Al-Aqsa represents the world's third holiest site. Jews, for their part, refer to the area as the "Temple Mount," claiming it was the site of two prominent Jewish temples in ancient times. Israel occupied East Jerusalem during the 1967 Middle East War. It later annexed the holy city in 1980, claiming it as the capital of the self-proclaimed Jewish state in a move never recognized by the international community.
Last Update: May 28, 2014 12:46 pm
RELATED TOPICS