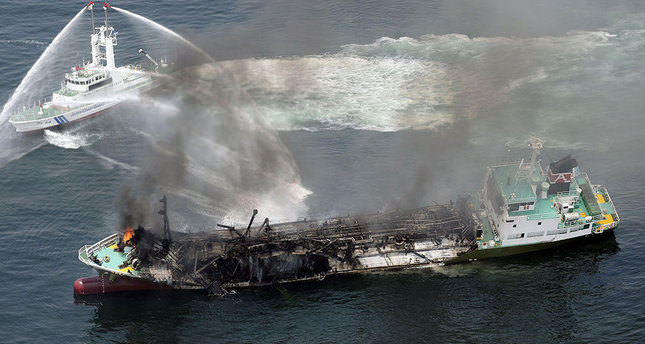 by May 29, 2014 12:00 am
TOKYO — A 998-tonne oil tanker was listing off the Japanese coast Thursday after a large explosion and subsequent fire that sent towering columns of acrid smoke into the sky.

The 64-year-old captain of the ship was still unaccounted for hours after the accident, while four of his crew were in hospital being treated for severe burns, according to coastguards.

The tanker had unloaded its cargo of crude oil last week and was stationary close to the coast of Hyogo prefecture, around 450 kilometres (280 miles) west of Tokyo, when the explosion happened.

Akihiro Komura, an official from Syoho Shipping, a Hiroshima-based shipping firm that owns the vessel, told AFP that seven of the eight Japanese crew were safe.

"The ship unloaded crude oil at a port in Hyogo prefecture, and the tanker was virtually empty when the accident occurred," he told AFP by telephone.

"I heard that a crew member was using a grinder to remove paint and that seems to have triggered the blast, which we believe could have occurred when the remnants of the oil caught fire.

"It is a Japanese ship and belongs to our company. All the crew members are Japanese nationals. We have confirmed seven out of the eight are alive and one, believed to be the captain, is still missing."

News of the incident, which happened at around 9:30 am (0030 GMT), caused Prime Minister Shinzo Abe to interrupt debate in parliament.
"In waters off Hyogo (prefecture), a tanker has exploded and is currently in flames," he told lawmakers.

Television footage shot from helicopters showed thick columns of black smoke billowing from the stricken tanker as water jets doused it.
Jagged shards of metal appeared to show where the tanker had exploded, with large sections peeled back as if they had been jimmied by a giant can opener.

Coastguard officials said they had raced to the scene after hearing that the Shoko-Maru had exploded.

They said four of the seven rescued crew members had been rushed to hospital for injuries, while the other three did not require immediate medical care.

In mid-afternoon, emergency crews were continuing to hose down the tanker in an effort to cool it, a coastguard spokesman said.
"The interior of the ship is likely to be extremely hot. Even if you cannot see flames, it's possible that the fire might break out again," he said.

"We are searching (for the captain) in waters around the ship," he said.

Himeji port is one of a number that sit along the Inland Seto Sea coast, where there are numerous pockets of heavy industry.

The city itself is a popular tourist destination, and is home to one of Japan's finest feudal castles.