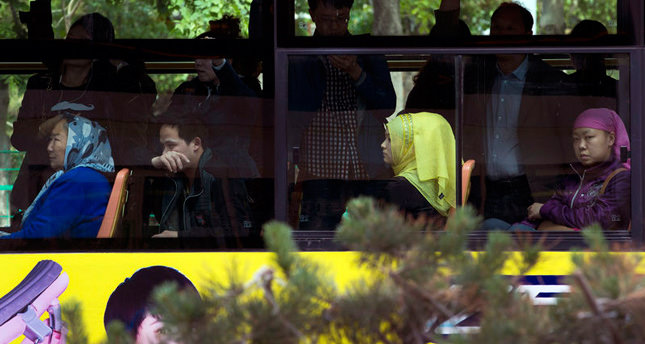 by AA Jun 03, 2014 12:00 am
ANKARA — The mountain ranges of northwestern East Turkestan (Xinjiang) are one of China's wealthiest regions, but scholars say its Muslim Uyghur inhabitants have lived under socio-economic restrictions for decades.

Analysts say the Turkic-speaking ethnic group, which constitutes around 45 percent of the population, has been subject to religious, cultural and language restrictions, which have helped fuel its demands for a separate state.

With China now planning to develop a super highway through the mineral and oil-rich region, concerns are being raised as to how that may inflame tensions between the Uyghurs and the Han Chinese, whose population in East Turkestan has risen from 6.7 percent in 1949 to 40 percent in 2008.

Dr. Kun-Chin Lin, an expert in Chinese political economy at Chatham House, told the AA this week that investments in East Turkestan by private companies, along with the development of the "Silk Road" highway, could cause more Han migration to East Turkestan, adding to existing tensions.

"If [Uyghur] are not able to enjoy the benefits of this kind of economic development it's easy to see how there can be more resentment," Sophie Richardson, China director at Human Rights Watch, said.

"If there is an economic boom that doesn't benefit the Uyghur in that region, I think it's logical that there could be more resentment of results."

The rapid influx of Han, along with the restrictions Uyghur face on an almost daily basis, has sparked frequent violent protest.

Last week, Chinese authorities found 55 people from the region guilty of what it called "terrorism," "separatism" and "murder." Their mass trial was held at a stadium in East Turkestan's prefecture of Yili, near the border with Kazakhstan.

The trial followed an attack on a market in regional capital Urumqi last week, which left at least 30 people dead and injured almost 100 others. The death toll was the highest in the region since almost 200 people were killed in Urumqi during riots in 2009.

China's President Xi Jinping pledged to severely punish "terrorists" involved in the incident and to spare no effort in maintaining stability.

However, Dr. Reza Hasmath, a lecturer in Chinese politics at the University of Oxford, told AA that such violence is a manifestation of the socio-economic problems Uyghur face.

"If you speak [the] Uyghur language you don't have many economic opportunities," Hasmath said. "It's easier for you to find jobs, good jobs, higher paying jobs, if you speak Mandarin [Northern and Southwestern Chinese dialects]."

According to the Congressional-Executive Commission on China, an independent human rights monitoring agency, hiring practices in East Turkestan have reserved job positions in civil servant posts, state-owned enterprises and even the private sector exclusively for Han.

Religious restrictions on the Uyghur population have also sparked tensions and violence in the region for years.

Professor James D. Frankel, an expert in Chinese Islam at the University of Hawaii, told AA that such restrictions are part of the Chinese government's attempts to keep the restive region under control and to prevent separatism.

He said that Uyghur have a long history of independence from China, because East Turkestan became integrated into the country when it was annexed by the Qing dynasty in the 18th century.

"Politically, they [Uyghur] were independent through most of their history, so it's only in the last 250 to 300 years that that population in East Turkestan has been under Chinese control,'' Frankel said.

The region where East Turkestan is located has been strategically important for China since the beginning of the People's Republic in 1949 because its neighboring countries – Kazakhstan, Kyrgyzstan and Tajikistan – were part of the Soviet Union, according to Frankel.

"Therefore if the local population has any idea of being separate, then that cannot be entertained," he said. "For that reason, any movement towards separation or separatism has to be restricted by China."

The historic Silk Road was a series of trade routes on which cultural interaction between Asia and the West and the trade of Chinese silk was carried out during the Han dynasty from 206 BC to 220 AD.

The new Silk Road - an economic zone that China says will allow people to traverse boundaries - will include a high-speed transportation route, through which Chinese goods can be more quickly transported to Europe.

Plans are for a road in China that will begin in Shaanxi province's centrally located capital Xi'an before stretching west through Gansu and East Turkestan province near the Kazakhstan border, according to China's national news agency, Xinhua.

"The project is to foster economic development; it is to create greater links into Central Asia," Hasmath said.